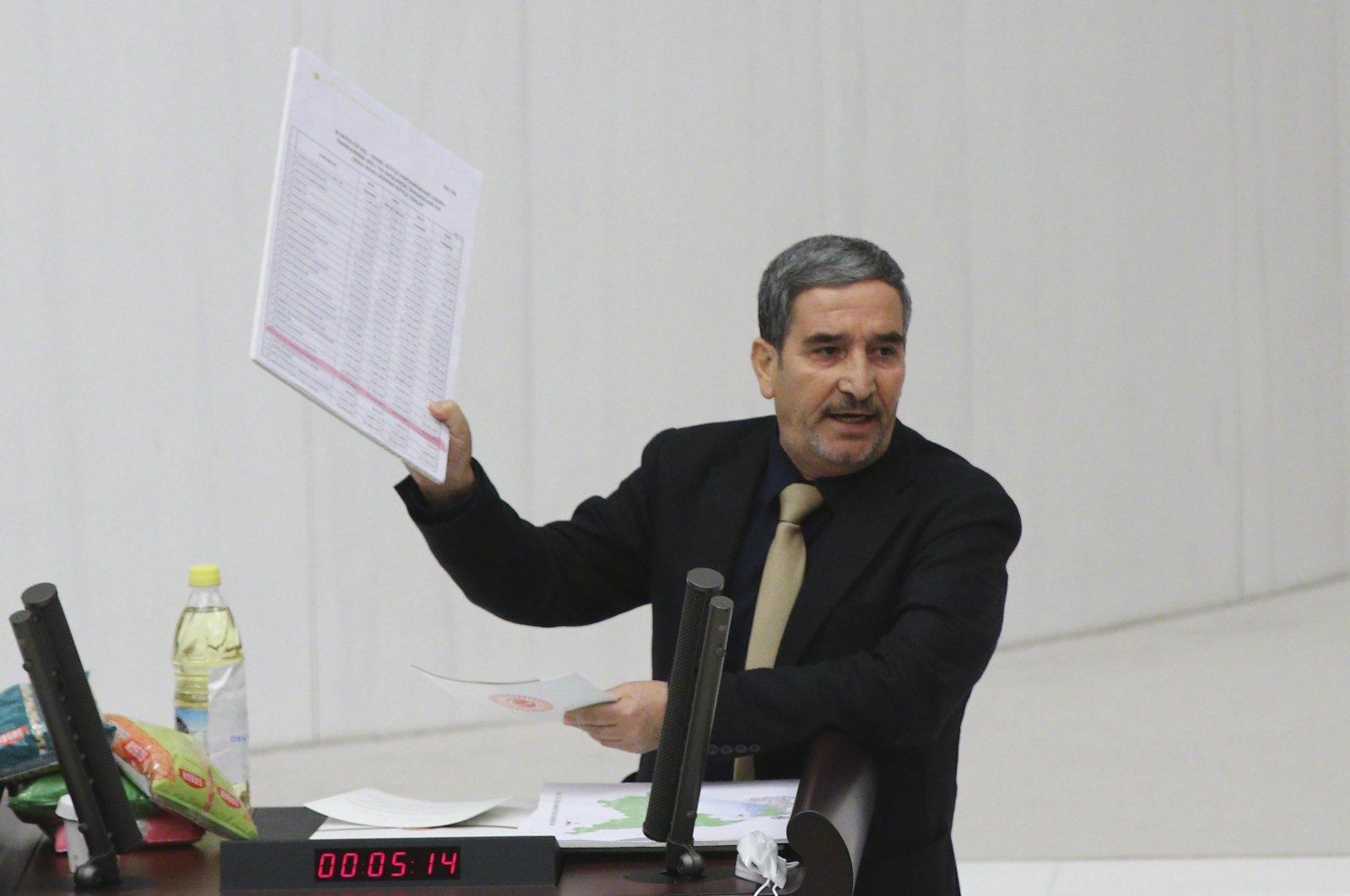 HDP Şanlıurfa deputy Nusrettin Maçin is seen during a speech at the Turkish Parliament on Dec. 8, 2021 (DHA Photo)
by Daily Sabah with Agencies Dec 08, 2021 10:03 pm
RECOMMENDED

The parliament ruled that Nusrettin Maçin, who represents southeastern Şanlıurfa province, will not be allowed to attend the next three assemblies as a result of his controversial remarks.

As every map of a prospective "Kurdistan" – be it confined to areas with a large Kurdish population or a map drawn on Kurdish nationalism-based maximalism that claims even provinces without a Kurdish majority – includes many of Turkey's eastern and southeastern provinces within the imaginary country's territory, Turkey rejects the plans for the foundation of a Kurdish state as it has manifested with its rejection of the Iraqi Kurdistan Regional Government's (KRG) referendum for independence.

Turkish authorities have countless times reiterated that Turkey is indeed the Kurds' homeland, as they have been coexisting peacefully with Turks and other ethnicities with whom they share cultural and religious similarities.

Even though the PKK, which is recognized by the United States, European Union, Turkey, United Kingdom and many other countries as a terrorist group, has officially abandoned its aim to establish an independent Kurdish state and claimed that they only want autonomy now, their separatist mindset is apparently here to stay.

Having kidnapped countless underage Kurdish children to send to the battlefront and killed scores of Kurdish civilians over accusations of "collaboration with the Turkish state," the group purportedly "defending their rights" have caused Turkey's Kurdish citizens much suffering.

The Turkish government has also implemented many humanistic reforms to improve the daily lives of its Kurdish citizens and to eliminate any possible discrimination they may face, setting up Kurdish-language TV channels, founding Kurdish language and literature departments in universities and so on.

President Recep Tayyip Erdoğan also said previously that Turkey has no "Kurdish issue," emphasizing that the government has never discriminated against anyone, on the condition that they have no ties with any terrorist group.

“I’ve said this dozens of times before and will say it again: There is no Kurdish issue in Turkey. We are here to defeat terrorism in all forms,” Erdoğan said in his speech to the ruling Justice and Development Party’s (AK Party) parliamentary group meeting.

“We cannot ignore the fact that it is the separatist terrorist organization’s (PKK) armed and political representatives that are the biggest enemy of our Kurdish brothers,” Erdoğan underlined.

The president also said that while the PKK kills hundreds and families are protesting in front of the HDP provincial building in Diyarbakır province in an effort to raise their voice against the terrorist group and be reunited with their abducted children, supporters of terrorism cannot be rewarded.

Erdoğan was referring to more than 150 families who have been holding a demonstration in Diyarbakır for over 2 years now, as they state the HDP has been supporting PKK terrorists in recruiting and kidnapping youth.

“Otherwise, how can we look at the faces of the mothers whose children have been forcefully abducted in the mountains, and who were dragged to death, or at the faces of those who could not protect their families from the terrorist organization or live in security?” Erdoğan asked.

Even though, thankfully, Turkey has not experienced any major terrorist attack in years, the country's Kurdish community once fell victim to a brutal campaign of terrorism by the PKK and the state's harsh measures to contain it.

The PKK positioned militants in heavily populated urban areas in the southeast while using suicide attacks against both civilian and public targets. Several HDP deputies and municipalities held by the HDP are accused of collaborating with PKK militants and providing logistical support and equipment during that change in the terrorist group's violent campaign.

According to Interior Ministry investigations, municipalities run by the HDP helped terrorists in various towns and cities dig trenches and erect barricades. Mainly deployed in the southeastern provinces of Diyarbakır, Şırnak and Mardin, this strategy led to the destruction of entire neighborhoods in clashes, with the most damage inflicted on Şırnak's city center and in the districts of Sur, Cizre and Nusaybin.

However, the strategy collapsed following successful anti-terrorist operations and the lack of cooperation from the people in the region. The cities suffered significant damage during the operations. Since then, the government has invested huge amounts of money to restore infrastructure and public services in the region.