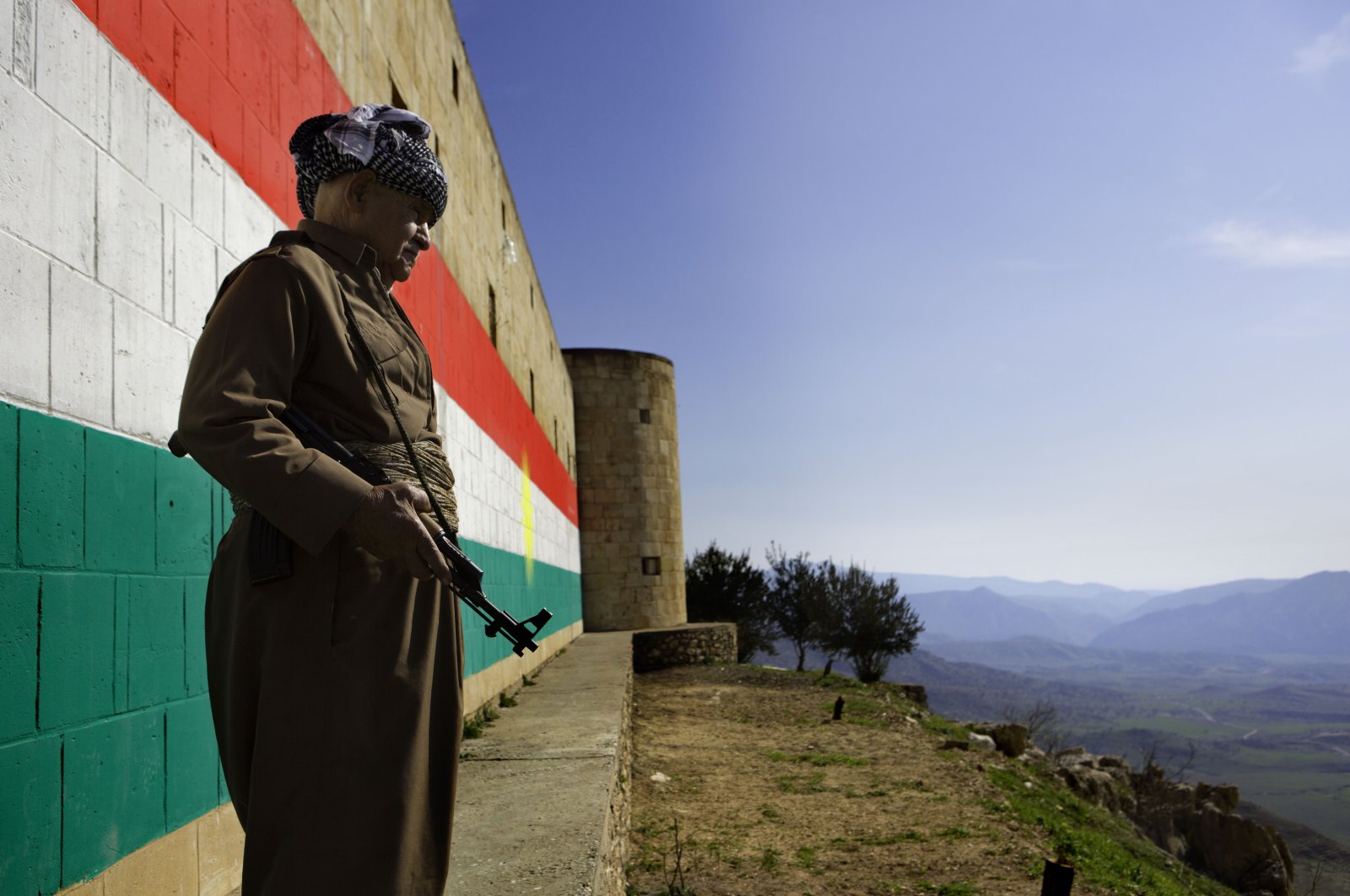 A Peshmerga fighter poses in front of a wall with a large fresco of the flag of the Kurdistan Regional Government (KRG), Dohuk, northern Iraq, Feb. 14, 2016. (Getty Images)
by DAILY SABAH WITH AA Sep 17, 2021 10:39 am
RECOMMENDED

The PKK terrorist group in northern Iraq has prevented the implementation of vital service projects in villages under their control, according to the governor of northern Dohuk province on Thursday.

In a news conference, Ali Tatar said project contracts were signed a few days ago to construct roads connecting 12 villages in Dohuk, but they were unable to launch the projects as the PKK has been preventing the implementation.

"The villages in Dohuk were destroyed in the course of the Anfal military operations (carried out by the former Iraqi regime) and the PKK continues such policy and prevents the reconstruction," Tatar added.

The anti-terrorism service in Iraq's Kurdistan Regional Government (KRG) said two members of the KRG's Peshmerga forces were killed in an attack by PKK terrorists in Dohuk province on Wednesday.

In June, six other Peshmerga personnel were killed in separate attacks by the same terrorist group in Dohuk.

Tensions between the PKK and the KRG of northern Iraq have been rising since last December, when the PKK moved in on the northeastern Syrian city of Hassakeh against the Kurdistan Democratic Party (KDP). The KDP is the largest party in the autonomous region with offices and deep-rooted relations in neighboring countries.

The PKK terrorist group has also accused the Irbil administration of collaborating with Turkey in its successful anti-terror operations in northern Iraq and is therefore attacking Peshmerga forces in the KRG.

As a result, PKK terrorist targets are being struck in the Metina, Avashin-Basyan, Zap and Qandil regions. In addition to F-16 fighter jets, border artillery units, fire support elements in the forward base areas and attack helicopters are participating in the operation.

The PKK uses the Mt. Qandil area in northern Iraq as its stronghold and is active in many cities and towns. The PKK also managed to establish a foothold in Sinjar in mid-2014 under the pretext of protecting the local Yazidi community from Daesh. Since then, the PKK has reportedly established a new base in Sinjar for its logistical and command-and-control activities. Around 450,000 Yazidis escaped Sinjar after Daesh took control of the region in mid-2014.

The terrorists were targeted in the Gara region, the ministry said on Twitter, also posting footage of the operation.