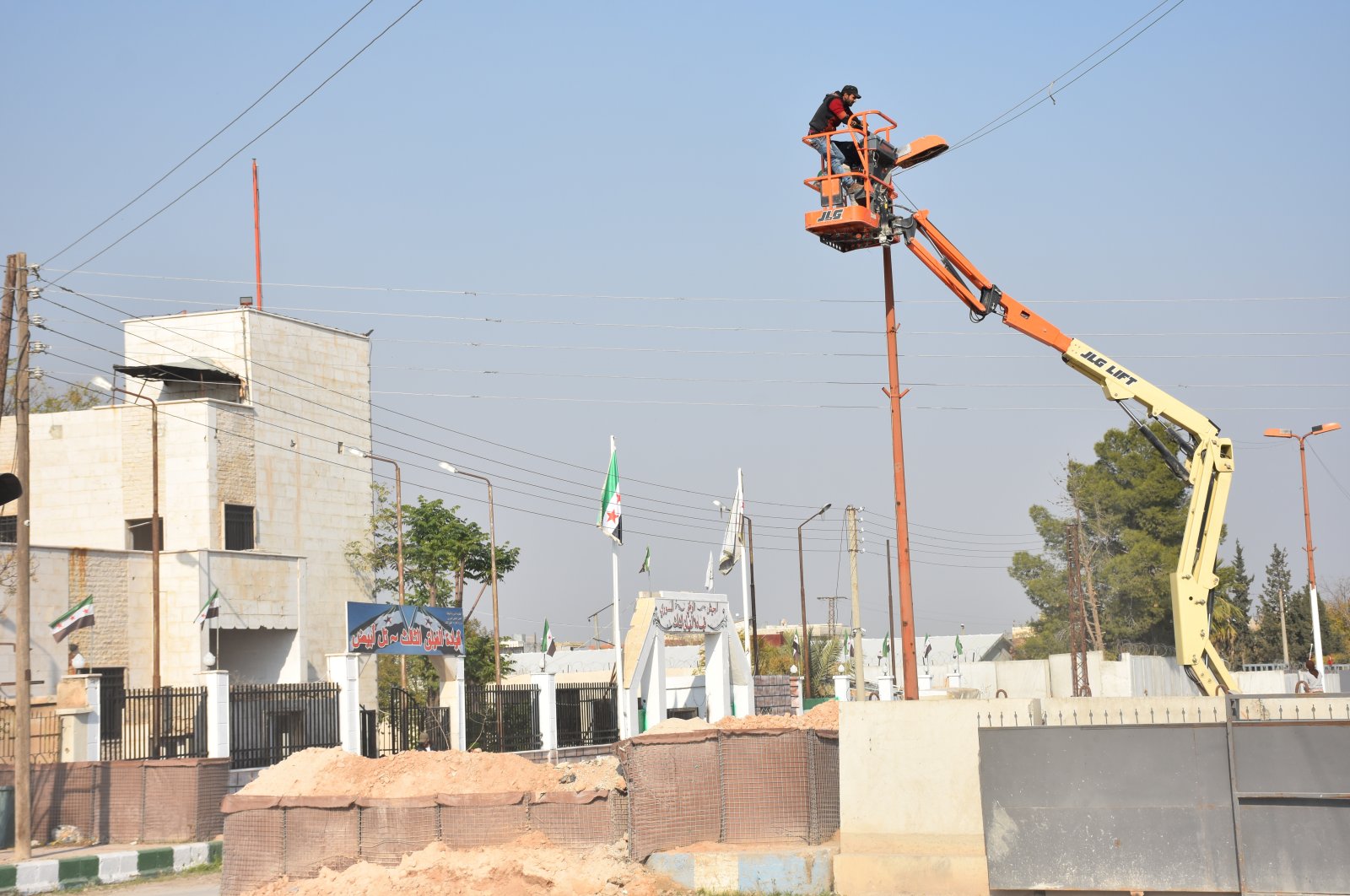 Northern Syria’s Tal Abyad district, which was cleared of the YPG/PKK terrorist organization with the joint operation of the Turkish Armed Forces (TSK) and the Syrian National Army (SNA), is reviving its infrastructure with the local council’s reconstruction efforts backed by Turkey.

The local assembly of Tal Abyad is renovating some of the public buildings and infrastructure that had been neglected by the Bashar Assad regime and was destroyed by YPG terrorists when they left the district.

As part of the construction and renovations, building materials were produced in the concrete and curbstone production facilities established by the Tal Abyad Local Council.

As part of the plan to modernize the city's center, the main road was freshly paved, electricity poles were decorated, and a clock tower was constructed.

The streets and avenues' landscape, pavement and lighting were designed with the comfort of pedestrians and traffic in mind, an effort that earned the appreciation of locals in Tal Abyad.

Tal Abyad Local Council head Salih Hac Abdullah told Anadolu Agency (AA) that the renovations will continue for the infrastructure damaged and destroyed during the war.

Abdullah noted that the construction of a complex, which will include a shopping center, a pharmacy and a vegetable market, will continue to prevent the disproportionate increase in the prices of medicines, basic food materials and vegetables.

A local from Tal Abyad, Abbodi Silo, said that he appreciates the reconstruction efforts in the city.

“Previously, the streets were dark, now the shops stay open until late at night. Tal Abyad has witnessed significant changes,” he said.

Turkey carried out Operation Peace Spring against the PKK terrorist group's Syrian branch, the YPG, which is mainly backed by the United States, in northern Syria to prevent a terrorism corridor from being created along its southern border, as well as to bring peace and tranquility to the region.

After the completion of the operation, Turkish and SNA units focused on ensuring the security of the region and creating the necessary conditions for the return of civilians displaced by terrorism.

Thanks to Turkey's intense contributions in the fields of health, education and service to return life to normal, the population of the region now numbers 250,000.

Turkey launched Operation Peace Spring in 2019 to eliminate terrorists from northern Syria east of the Euphrates to secure Turkey's borders, aid in the safe return of Syrian refugees and ensure Syria's territorial integrity.

The operation, conducted in line with the country's right to self-defense borne out of international law and United Nations Security Council resolutions, aimed to establish a terrorism-free safe zone for Syrians to return to the area east of the Euphrates, which was then controlled by the U.S.-backed YPG/PKK terrorists.

The country also rolled up its sleeves to reconstruct hospitals, schools, mosques and roads destroyed by the YPG/PKK. Within the scope of improving the region's social infrastructure, people were given food and clothing by several nongovernmental organizations (NGOs), while roads and buildings were rebuilt. These efforts paid off as hundreds of displaced Syrians started to return to the liberated areas.