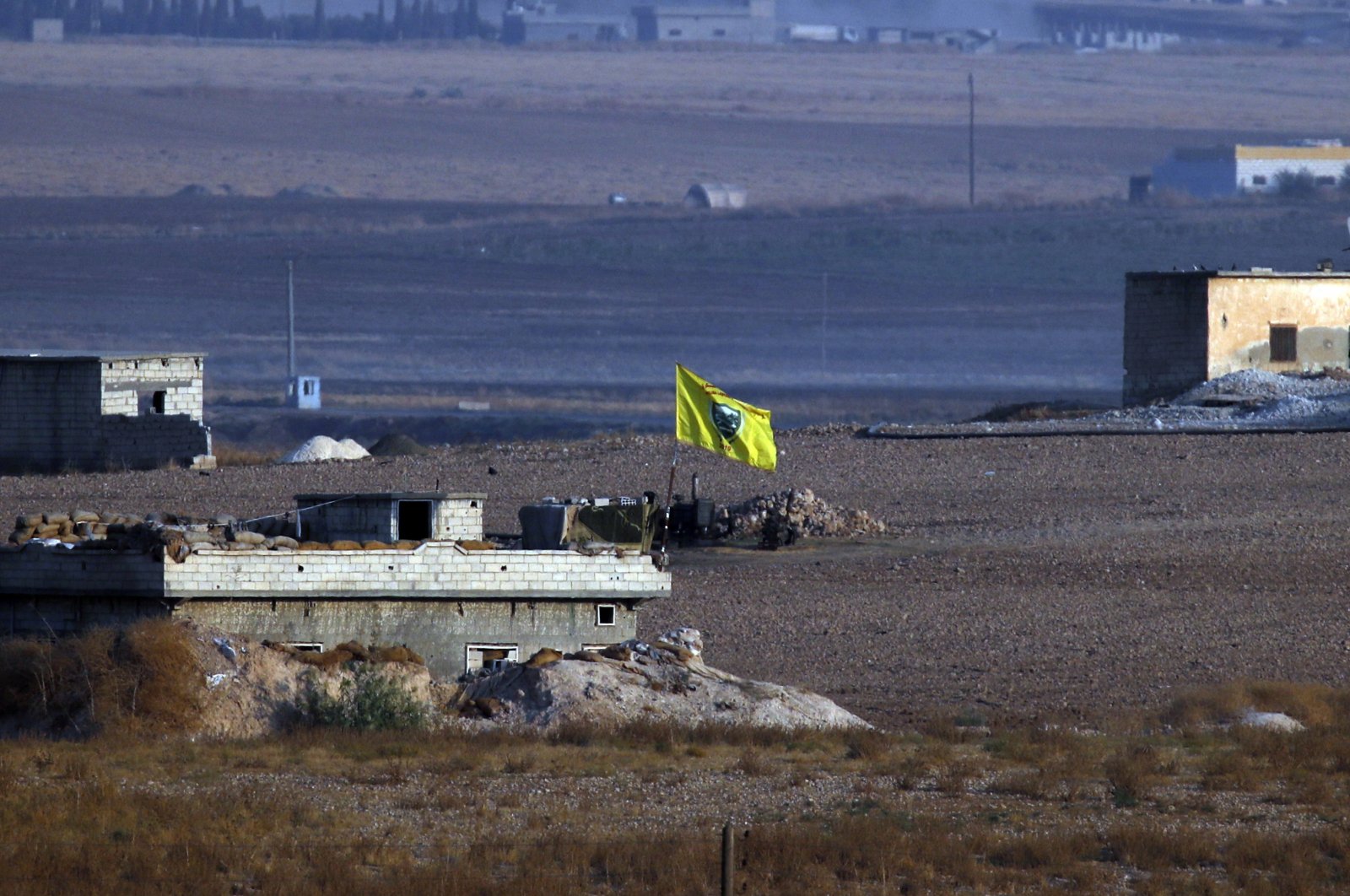 In this photo taken from Akçakale, Şanlıurfa province, southeastern Turkey, shortly after the Turkish operation inside Syria started, a flag of the YPG terrorist group flies on a building on the Syrian side of the border with Turkey, Oct. 9, 2019. (AP Photo)
by Daily Sabah with AA Dec 24, 2020 10:43 am

A Syrian national, identified by the initials B.H.F., was nabbed by Turkish forces and interrogated.

Upon interrogation, he disclosed key information about the terrorist group and the location of a tractor loaded with 150 kilograms (330.6 pounds) of plastic explosives.

The terrorist in custody also admitted to participating in many terror attacks in areas controlled by the Turkey-backed Syrian National Army (SNA), which killed numerous Turkish forces.

He also divulged the details of upcoming terror attacks the YPG, the PKK's Syrian offshoot, plans to carry out in the coming days.

Terrorist groups, particularly the YPG, often try to infiltrate and mount attacks in these areas to disturb the peace and stability restored by Turkey.

The YPG terrorist organization has forcibly recruited hundreds of young men in the past two weeks in northeastern Syria, according to sources.

Terrorists detained hundreds of men aged 18 and older in the last 14 days by launching raids on houses and at checkpoints in the city centers of Hassakeh and Qamishli provinces.

They continue to detain the men, separating them from their families in areas under the terror group's occupation.

Terrorists took the detainees to the so-called training camps in Hassakeh province.

In early July, the terrorist group detained and forcibly recruited nearly 400 men aged 18 to 35 in Hassakah.

The YPG has carried out ethnic cleansing in areas it has captured since 2012 through forced displacement and arbitrary practices.

Some 3,100 people are suffering in the YPG's detention centers in areas that fall within its control in northern Syria, according to the Syrian Network for Human Rights (SNHR).

Two civilians in northeastern Syria’s Tal Abyad were killed by a bomb planted by the YPG, in the latest act of brutality by the terrorist group.

According to AA, the civilians were trying to strengthen the doors and windows of a house against looting by the terrorist group. But, they were too late when bombs, placed by the YPG under the door’s threshold, exploded.

Since 2016, Turkey has launched four successful anti-terrorist operations across its border in northern Syria to prevent the formation of a terror corridor and enable peaceful settlement by locals: Euphrates Shield in 2016, Olive Branch in 2018, Peace Spring in 2019 and Spring Shield in 2020. The country also launched a series of successive operations called "Claw" in northern Iraq starting in June 2019.

Turkey involved itself in war-torn Syria in order to protect its civilians, eliminate terrorism and facilitate the return of thousands of displaced Syrian civilians to their homes.

Schools have been renovated and a hospital is also being built in Azaz. Turkey also helps locals build olive oil production facilities in the area, where agriculture is the main source of income for residents.

The YPG, which is backed by the U.S. under the pretext of fighting Daesh, previously received numerous condemnations by international human rights bodies, including Human Rights Watch (HRW), Amnesty International and the United Nations, for its violations of human rights, including arbitrary arrests, forced recruitment of child soldiers and the forceful relocation of local people.

In August, HRW said the YPG was recruiting children from displacement camps in the country's northeast in violation of international law. Last year, the U.N. found 224 cases of child recruitment by the YPG and its female forces, nearly five times the number in 2016. It said the YPG had forcibly abducted the children in at least three cases.

Over the course of its more than 30-year terror campaign against Turkey, the PKK, listed as a terrorist organization by Turkey, the U.S. and the European Union, has been responsible for the deaths of 40,000 people, including women, children and infants.