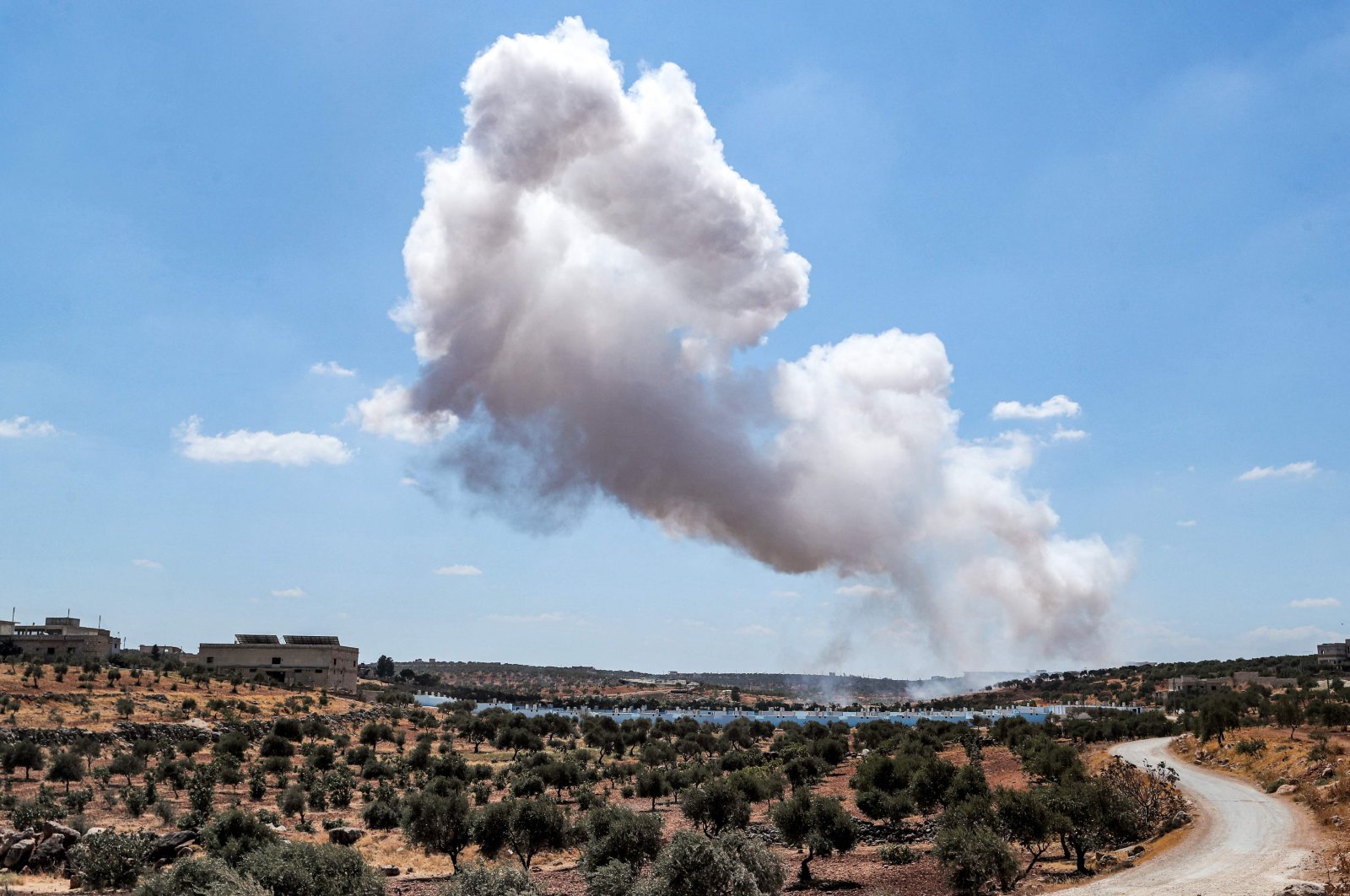 A smoke plume rises after an aerial bombardment near a make-shift camp for displaced Syrians near the town of Kafraya, north of Syria's Idlib province, Syria, Sept. 7, 2021. (AFP Photo)
by Daily Sabah with Reuters Sep 26, 2021 10:41 pm
RECOMMENDED

The Turkish military has deployed more troops on the M4 highway south of northwestern Syria's opposition-held Idlib and is prepared for any potential ground operation amid surging attacks by the Bashar Assad regime.

The deployment came just days ahead of the scheduled meeting between President Recep Tayyip Erdoğan and his Russian counterpart Vladimir Putin this week in Sochi.

The Assad regime and its backer Russia have stepped up their attacks on Syria’s northwestern Idlib province since August as part of their weekslong campaign on the opposition bastion.

Residents, as well as opposition and military sources, said that Russian jets bombed villages around the city of Afrin Sunday, intensifying airstrikes over the past week on towns and villages held by Turkish-backed opposition groups.

Opposition sources said at least five fighters from a Turkey-backed faction were killed while at least 12 civilians were injured when Russian jets flying at high altitudes dropped ordnance, according to a network of plane spotters who document sightings of jet fighters.

The Russian bombing campaign has spread from Jabal al-Zawiya in Idlib province further northwest to the Afrin area near the Turkish border, with shelling from Syrian regime army outposts aided by Iranian-backed militias.

"Russia's escalation has intensified this week and begun from Idlib province and now stretches to areas in northern Aleppo province along the border," Major Youssef Hamoud, the spokesperson for the Syrian National Army (SNA), the main Turkish-backed opposition force, told Reuters.

The escalation comes days before Erdoğan is expected to meet Putin in Sochi Wednesday to discuss a deal reached last year that ended a Russian-led Syrian regime army offensive that displaced nearly a million people in Idlib, in the largest humanitarian displacement of the more than decade old conflict.

Erdoğan said Friday he would seek to take relations with Moscow “much further” when he meets Putin. “We strive to further our bilateral relations with Russia,” he emphasized.

Russian Foreign Minister Sergei Lavrov said in New York Saturday that progress in implementing the deal was slow. He also said the summit would discuss Ankara's obligation to end the presence of militants that Moscow blames for the violence, Tass News agency said.

The cease-fire reached by Moscow and Ankara cemented significant gains by the Syrian regime army and Iranian-backed militias, but a major deployment of Turkish troops inside Idlib province halted further advances by the Russian-led offensive. Over 4 million people live in the densely populated opposition-held northwest, including half a million in makeshift tents along the Turkish border who were driven by successive Russian-led campaigns that regained territory seized by the opposition.

Signaling its determination to deter any renewed assault to retake the bastion, Turkey has in the last two weeks beefed up dozens of bases where thousands of troops are stationed, military commanders coordinating with the Turkish army said.

"The Turkish army deployment is taking a combat posture with all the military bases reinforced and has poured in convoys whether of armored vehicles, fighters or equipment," Hamoud added.

Military sources said a large Turkish military convoy with rocket launchers and tanks crossed into Syria overnight and was seen heading in the direction of Jabal al-Zawiya where Turkish bases are spread.

Turkey’s military has conducted several operations since 2016 that have altered the course of the Syrian conflict in the north. Ankara has not given a figure on its troop deployment, by far the largest outside the NATO member state.

Earlier in September, five military groups operating under the Turkey-backed SNA in northern Syria united as the Syrian Liberation Front.

At a ceremony held in the center of the al-Bab district, the five divisions announced that they had merged and would operate side by side with the Turkish Armed Forces (TSK) in areas rid of terrorism following Turkey's military operations in the region.

Idlib falls within a de-escalation zone forged under an agreement between Turkey and Russia in March 2020. The Syrian regime, however, has consistently violated the terms of the cease-fire, launching frequent attacks inside the de-escalation zone.

Since April 2018, attacks on Idlib, the last opposition stronghold, have dramatically intensified, causing new waves of refugees to flow toward the Turkish border and putting the country – which already hosts 3.7 million Syrian refugees – in a difficult position.

As a result, Turkey, which has the second-largest army in the trans-Atlantic NATO alliance, has funneled troops and equipment into the region to stop the Syrian regime’s advance and prevent another wave of refugees.

Turkish soldiers are currently stationed in the region to protect the local population and support counterterrorism groups. Despite the military escalation, Ankara has also been keeping diplomatic channels active with Russia in the hope of finding a political solution, urging the country to uphold the peace agreements and ensure an immediate cease-fire.