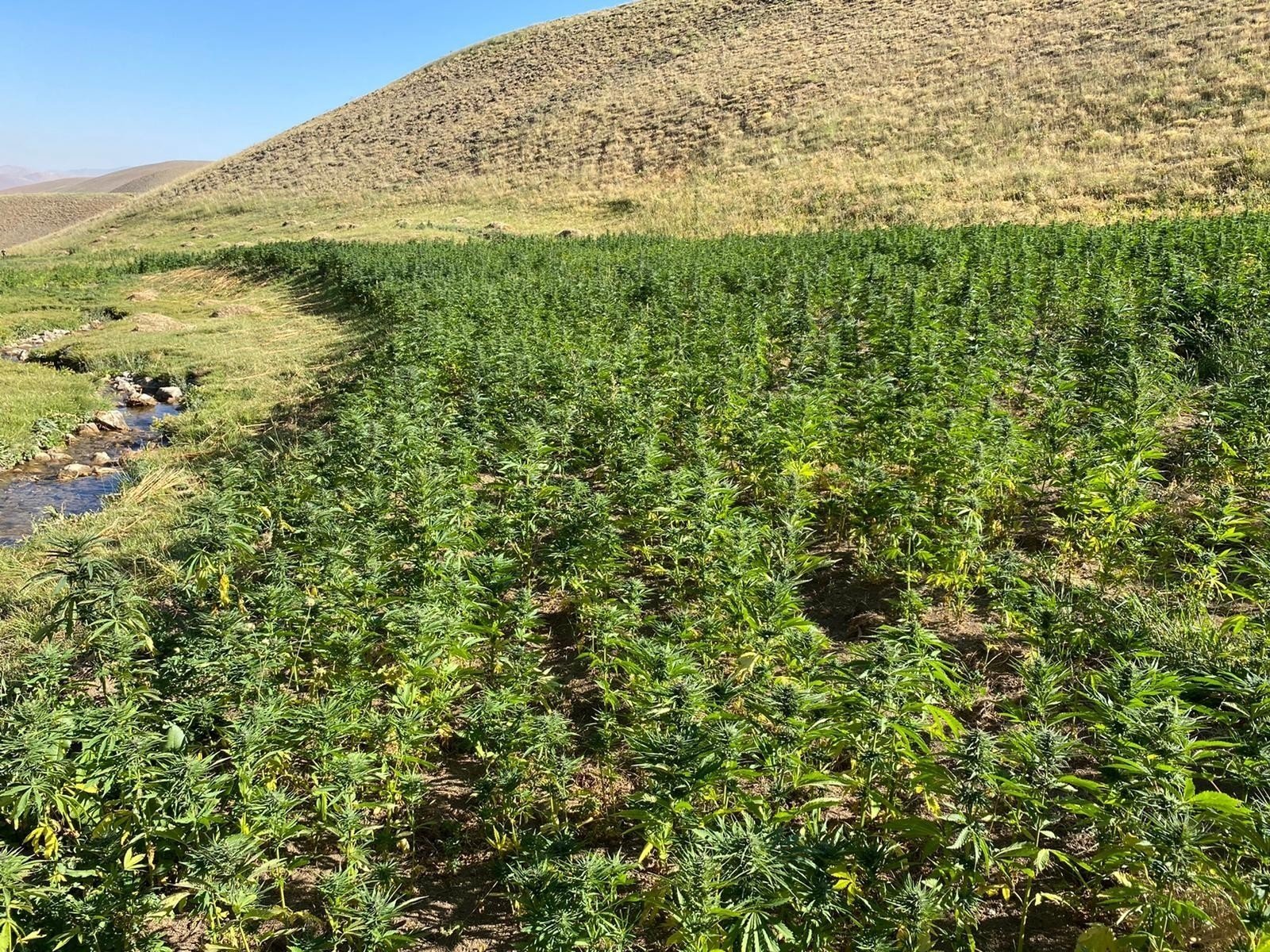 Counterterrorism operations crippled PKK's drug trafficking as nearly 11 tons of drugs belonging to the terrorist group were seized by the security forces in 2020.

Detection dogs have been a game-changer in these operations as they managed to find even the best-hidden drugs which were covered with alternative scents by the terrorists in order to suppress the drugs' heavy smell.

Terrorist groups, particularly the PKK, have exacerbated the booming regional drug trade. The group is accused of smuggling drugs to and from Europe as well as cultivating cannabis in southeastern Turkey as a way to fund its illegal activities.

Back in 2018, Turkish Interior Minister Süleyman Soylu said the PKK terrorist group controlled 80% of the drug trade in Europe, earning around $1.5 billion annually.

Van has become the leading province when it comes to the number of drugs seized in 2020 as more than 5 tons of heroin have been seized in the province, as well as 732 kilograms of synthetic drugs, more than one ton of marijuana, 1,560,000 cannabis sativa roots and 254 kilograms of opium. Out of 1,735 suspects who were thought to be connected with the drug trafficking in Van, 342 of them were arrested.

In Hakkari, on the other hand, 2.5 tons of heroin were seized in 2020, as well as 500 kilograms of marijuana and 5 tons of acid anhydrite.

Speaking to Anadolu Agency (AA), Hakkari Mayor İdris Akbıyık said that 2020 was the most peaceful and secure year in Hakkari so far, pointing to the successful counterterrorism operations against the PKK in the province.

"Terrorism and drug trade are linked with each other. We hope to not only put an end to terrorism but also stop any drug-related activities with all the means of the state," Akbıyık continued.

Turkish police are experienced in dealing with international drug trafficking, as the country lies on a drug-smuggling transit route between Asia and Europe. Turkey is also fighting rising levels of drug abuse, especially among youth. It has stepped up anti-narcotics efforts in recent years.

Fatih Dörtdoğan, deputy head of the counter-narcotics crimes department at the Hakkari police headquarters, also said that compared with previous years, 2020 was a success for the province in terms of both stopping drug trafficking and capturing suspects.

"In this region, where drug and terrorism are interlinked, every blow to the drug trade is also a blow to terrorism," he said, underlining that the biggest financial source of terrorism is drug trafficking.

Van police headquarters' deputy head of the fight against narcotics crimes department Muhsin Dumlupınar, on the other hand, said they have been working 24/7 in order to stop the drug trafficking completely.

"Van shares a long border with Iran. Production of opium poppy, which is the raw material of heroin, increases in Afghanistan, and they are being processed. From the Iranian border, these products are being tried to be sent to our country illegally, in order to enter into the European drug market eventually. This is known as the 'Balkan route,'" Dumlupınar said, pledging determination to halt this process.

According to Dumlupınar, 40% of the drugs seized in Turkey were captured in Van. "We are doing our best to both protect society's health and the future of our country, the youth. And the numbers show our success in this," he continued.

The PKK terrorist group is behind the sale of heroin on the streets of Europe, a report by the Directorate General of Security showed back in July 2020.

According to the “2020 Turkey Drug Report,” the terrorist group makes use of retail sales of the lethal drug in European countries.

The report also said the PKK is behind the organization of street sales of heroin. Saying that the group takes advantage of higher retail prices, the report added that the terrorists are coordinating with drug dealers.

The terrorist group also continues to force civilians to cultivate cannabis, which remains an illegal drug in Turkey. According to the report, the group takes a prominent cut from sales of the drug after harvest.

Back in 2019, a report by the EU drugs agency (EMCDDA) and the European Law Enforcement Agency (Europol) decried growing gang violence and drug-related homicide in Europe and cited the terrorist PKK’s role in this.

“The PKK ... has been reported to be involved in organized crime, with few examples of its engagement in the drug trade in the EU,” the 260-page "2019 EU Drug Market Report" said.

A Turkish police report released on Sept. 26, 2019, also said that the PKK is active in all phases of drug-trafficking, including production, delivery, distribution and sales. The terror group reportedly produces heroin in laboratories in its camps in northern Iraq and sells it to Europe. In its production process, the PKK terrorist organization forces civilians to produce cannabis roots in the eastern and southeastern provinces of Turkey and uses that money to fund terror activities.

Though its numbers have dwindled, the PKK survives through its drug revenues and has lately enjoyed free rein in northern Syria with military support from the U.S. to its Syrian branch, YPG.