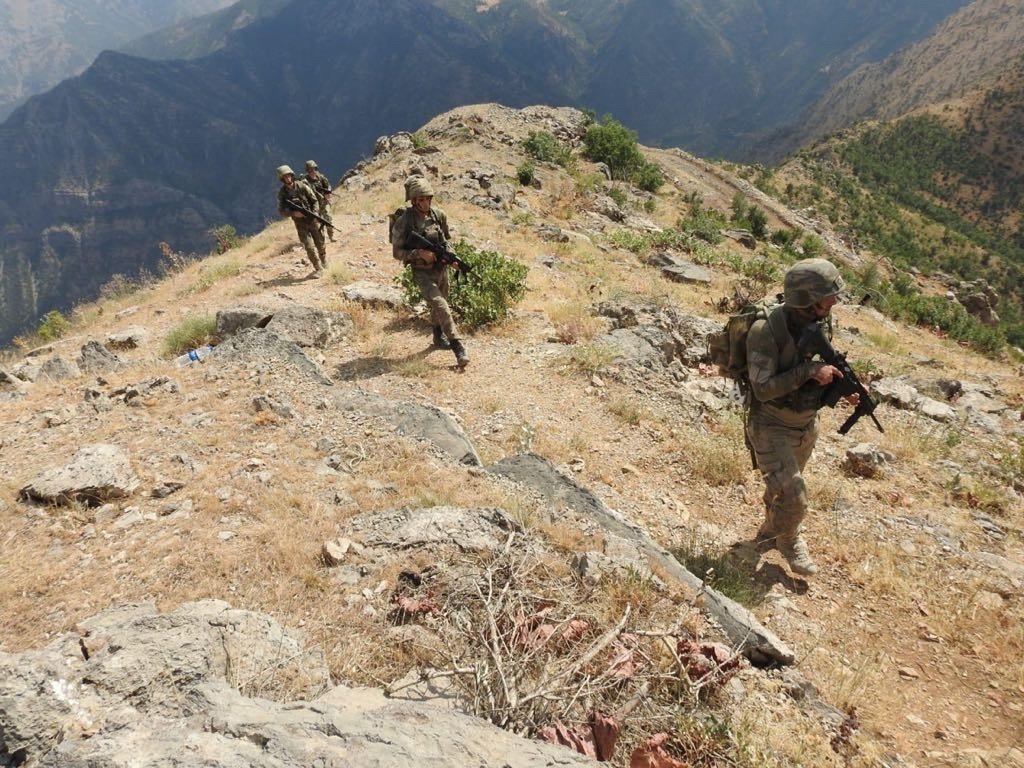 Turkish security forces eliminated at least 10 PKK terrorists in both northern Iraq and northern Syria, the National Defense Ministry said, as Ankara told Baghdad that the PKK terrorist group continues its existence in Qandil, northern Iraq, as well as in the Mahmur and Sinjar regions, which are directly under the control of the central government.

The terrorists were preparing to attack the Operation Euphrates zone and were targeted by fire support vehicles, the ministry said on Twitter.

The Turkish Armed Forces (TSK) and the National Intelligence Organization (MIT) targeted three terrorists with airstrikes in Iraq's Metina district near the Turkish border, the ministry also said on Twitter on Saturday.

"We will continue to destroy the terrorists in their lair!" the ministry emphasized.

"Our fight against terrorism continues effectively and decisively everywhere," the ministry underlined.

Since 2016, Turkey has launched a trio of successful anti-terror operations across its border in northern Syria to prevent the formation of a terror corridor and enable the peaceful settlement of residents – namely, the Euphrates Shield (2016), Olive Branch (2018), and Peace Spring (2019) operations.

The Claw operations are a series of offensives Turkey has been carrying out since 2019 against terrorist organizations in northern Iraq, particularly the PKK.

The latest of these operations were launched April 23 in the Metina and Avasin-Basyan regions near the country's borders.

The TSK regularly conducts cross-border operations in northern Iraq. Turkey has long stressed that it will not tolerate terrorist threats posed against its national security and has called on Iraqi officials to take the necessary steps to eliminate the terrorist group. Ankara previously noted that if the expected steps were not taken, it would not shy away from targeting terrorist threats.

During the meeting, Turkey is pleased with the positive course of bilateral relations in the commercial, military and intelligence fields, Erdoğan said, adding that the cooperation in fighting terrorism should be strengthened.

Erdoğan also stressed that the PKK terror group continues its existence in Qandil and northern Iraq, as well as in the Mahmur and Sinjar regions, which are directly under the control of the central government.

In a recent operation held in these regions used by the terrorist PKK and its affiliates, Turkey targeted only the members of the terrorist group, as it has always done before, he said.