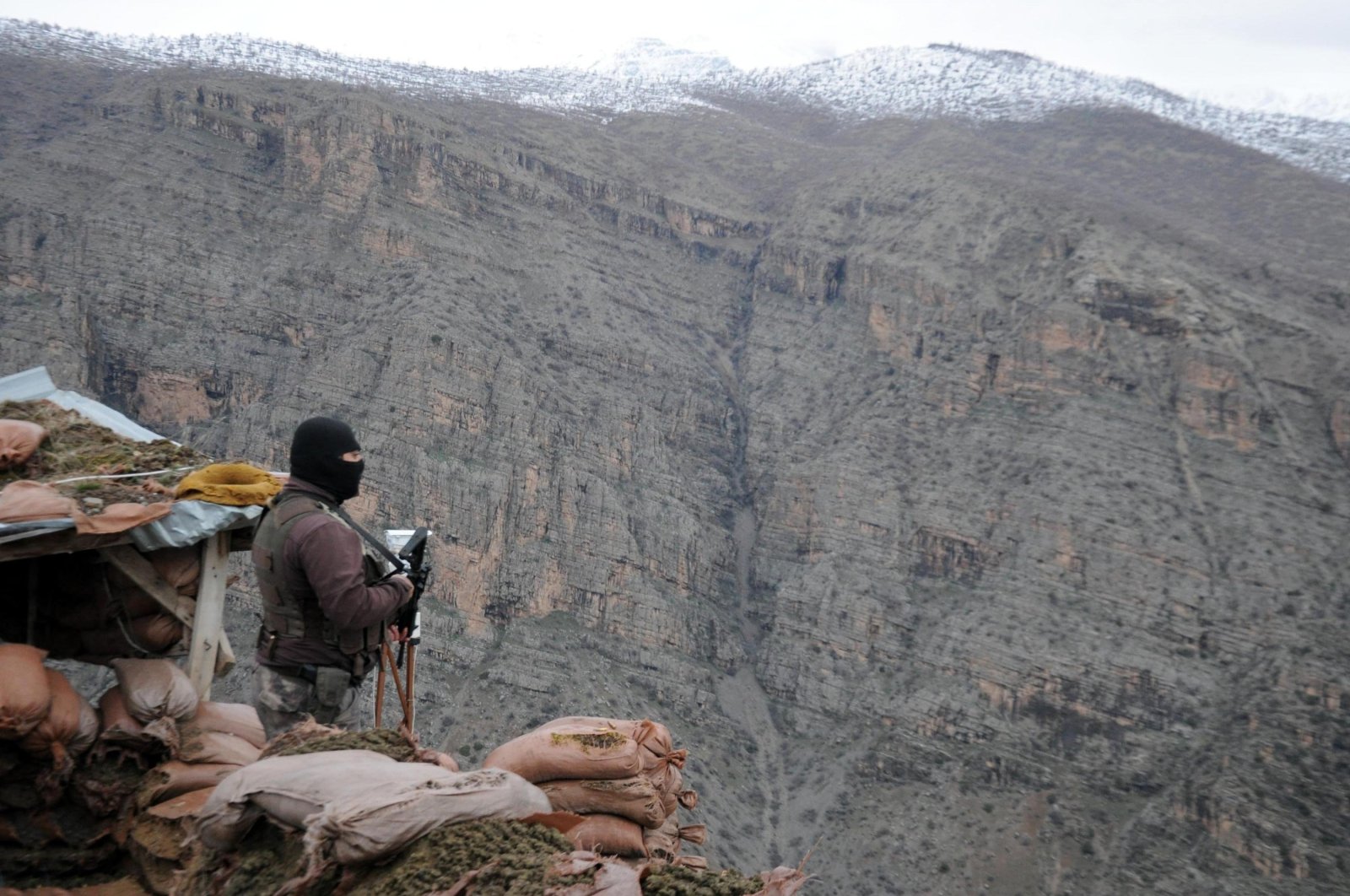 A Turkish soldier stands on guard near the Iraqi border in the mountainous region of Hakkari, southeastern Turkey. (AA Photo)
by DAILY SABAH WITH AA Aug 13, 2021 10:40 am
RECOMMENDED

The ministry said on its social media account that the soldier was severely wounded following a mortar attack on a post in the area of operations of the Turkish Armed Forces' (TSK) Operation Claw-Lightning and later succumbed to his wounds despite receiving medical care.

"One of our heroic soldiers was seriously injured in a mortar attack by PKK terrorists on one of our bases. He was taken to hospital where he could not be saved," the ministry said in a statement.

Turkish forces quickly launched retaliatory strikes on the assailants, and three PKK terrorists "were neutralized" according to initial reports, the ministry said, adding the operation in the region was still ongoing.

Turkish Defense Minister Hulusi Akar issued a message of condolence on Friday for the soldier.

In his message, Akar wished God's mercy on the soldier and extended his condolences to his grieving family and the Turkish nation.

Turkey has long been stressing that it will not tolerate terrorist threats posed against its national security and has called on Iraqi officials to take the necessary steps to eliminate the terrorist group. Ankara previously noted that if the expected steps were not taken, it would not shy away from targeting terrorist threats.

PKK targets are being struck in the Metina, Avashin-Basyan, Zap and Qandil regions. In addition to F-16 fighter jets, border artillery units, attack helicopters and fire support elements on the front lines are participating in the operation.

Furthermore, Operations Claw-Tiger and Claw-Eagle began in border regions of northern Iraq in June 2020 to ensure the safety of Turkey's people and frontiers.

Turkish security forces have eliminated 18,313 terrorists since July 24, 2015, including 1,631 in Iraq and Syria since Jan. 1 this year, said Defense Minister Akar last week.

Most recently, four YPG/PKK terrorists were killed by Turkish security forces in northern Syria and northern Iraq, the Defense Ministry said on Thursday.

Two terrorists were targeted in northern Iraq, the ministry said on Twitter.

The other two terrorists were killed in the Operation Euphrates Shield and Operation Peace Spring zones in northern Syria, it added.

Since 2016, Turkey has also launched a trio of successful counterterrorism operations across its border in northern Syria to prevent the formation of a terror corridor and enable the peaceful settlement of residents: Euphrates Shield (2016), Olive Branch (2018) and Peace Spring (2019).

In its more than 40-year terror campaign against Turkey, the PKK – listed as a terrorist organization by Turkey, the U.S., and the EU – has been responsible for the deaths of at least 40,000 people, including women, children, and infants. The YPG is the PKK's Syrian offshoot.