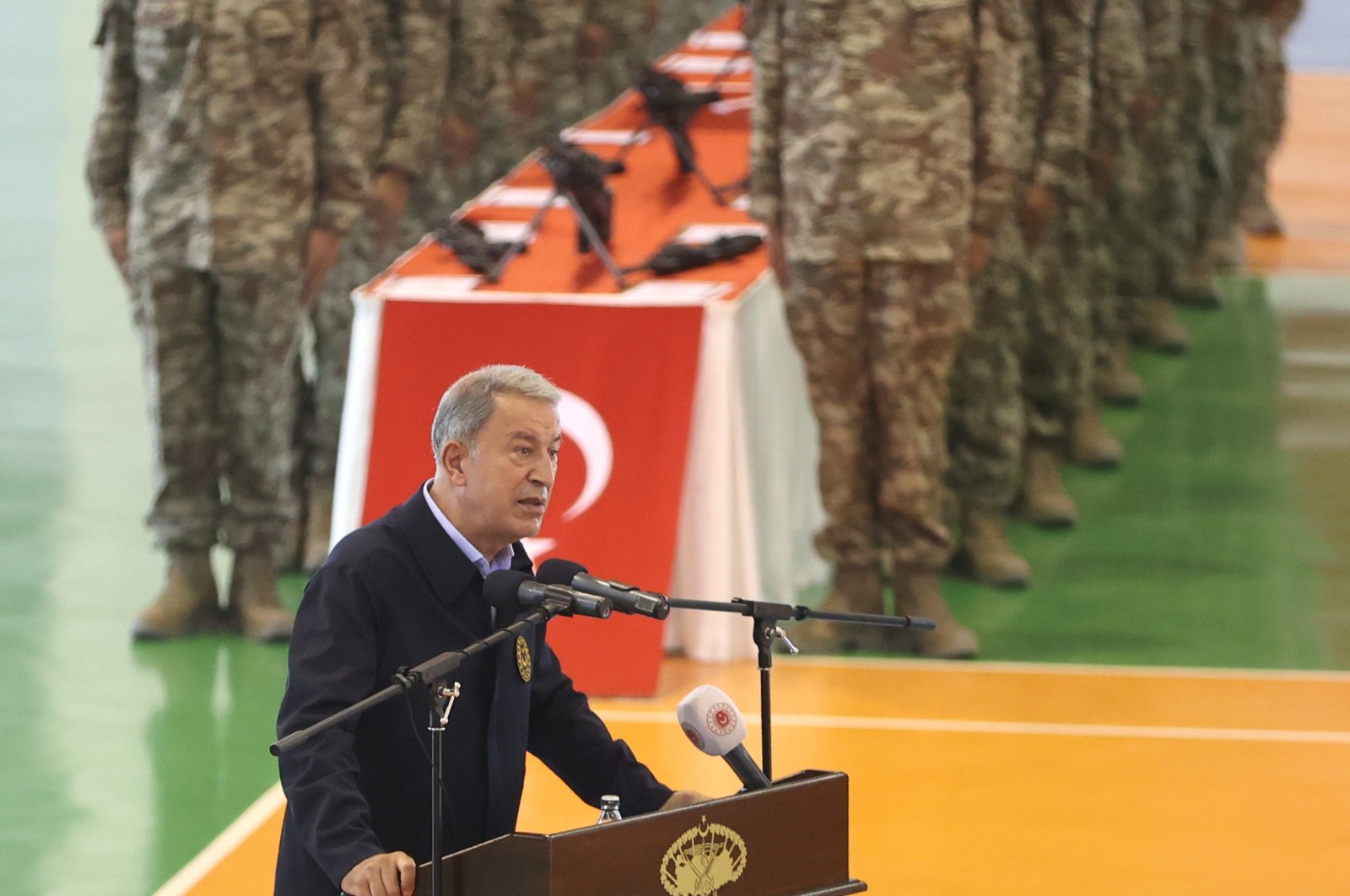 Turkish security forces have eliminated 18,313 terrorists since July 24, 2015, including 1,631 in Iraq and Syria since Jan. 1 this year, said Defense Minister Hulusi Akar on Saturday.

"The Turkish Armed Forces' (TSK) story of heroism and sacrifice is not over, it continues. Turkish soldiers continue to make history," Akar said at a swearing-in ceremony for Maroon Berets who successfully completed a 47-week special training program in Ankara.

Akar emphasized that the fight against terrorism, which began on July 24, 2015, continues through the Claw operations.

The Claw campaigns are a series of military operations that Turkey launched in 2019 against terrorist organizations in northern Iraq, particularly the PKK.

PKK terrorists are known to have many hideouts and bases in northern Iraq from where they carry out attacks in Turkey.

PKK targets are being struck in the Metina, Avashin-Basyan, Zap and Qandil regions. In addition to F-16 fighter jets, border artillery units, attack helicopters and fire support elements on the frontlines are participating in the operation.

The TSK regularly conducts cross-border operations in northern Iraq. Turkey has long been stressed that it will not tolerate terrorist threats posed against its national security and has called on Iraqi officials to take the necessary steps to eliminate the terrorist group. Ankara previously noted that if the expected steps were not taken, it would not shy from targeting terrorist threats.

Underlining that Turkey respects all of its neighbor's borders, sovereign rights and laws, including those of Iraq, Akar added that the country will continue to stand by its Libyan and Azerbaijani brothers in their just causes.

Most recently, Turkey killed six members of the terrorist group PKK's Syrian branch YPG in northern Syria, across Turkey's southern border, including one behind a deadly attack on civilians last week, the Turkish Defense Ministry said on Sunday.

The terrorists were killed by Turkish security forces in self-defense in Zavian and Shaalah Tal Cican and Tel Unaib in the Tal Rifaat region, the area of Turkey's counter-terrorism Operation Euphrates Shield, said a ministry statement.

One of the terrorists slain was the perpetrator of an Aug. 5 attack on an ambulance in the region which killed two civilians.

Touching upon the recent developments in Afghanistan, Akar said, "We have done our best, within our means, so that our Afghan brothers and sisters can live in safety and prosperity."

Reiterating that the country has been working for 20 years to bring peace to Afghanistan, Akar added that Turkey has been operating Hamid Karzai International Airport in Kabul for the last six years and wants to continue to manage the airport to support the Aghan people.

Ankara has been running the military and logistic operations of the airport for six years as part of the NATO-led Resolute Support Mission.

Turkish President Recep Tayyip Erdoğan said recently that Turkey is considering operating the major Kabul airport after the U.S.-led pullout. He also said that Ankara is ready to discuss the peace process with the Taliban, adding that the group must stop the occupation.

Turkey, whose forces in Afghanistan have always been comprised of noncombatant troops, has offered to guard and run Kabul’s airport after the NATO troops’ withdrawal. Ankara has been holding talks with Washington on logistic and financial support for the mission, as questions remain on how security will be assured along major transport routes and at the airport.

At the end of a series of meetings with NATO leaders on the sidelines of the alliance summit in June, Erdoğan stated that Turkey was seeking Pakistani and Hungarian involvement in the mission in Afghanistan following the departure of the U.S.-led NATO forces.

Regarding the wildfires in Turkey, Akar said that the TSK has provided resources and personnel to help put out wildfires that broke out in several parts of the country.

Four drones, five landing ships, one patrol boat, four helicopters, more than 50 firefighter trucks, sprinklers and over 600 personnel were provided by the TSK, he added.

When needed, the country's armed forces have mobilized all of their resources and capabilities, noted Akar, adding that the government has used their services in collaboration with the relevant institutions and organizations.