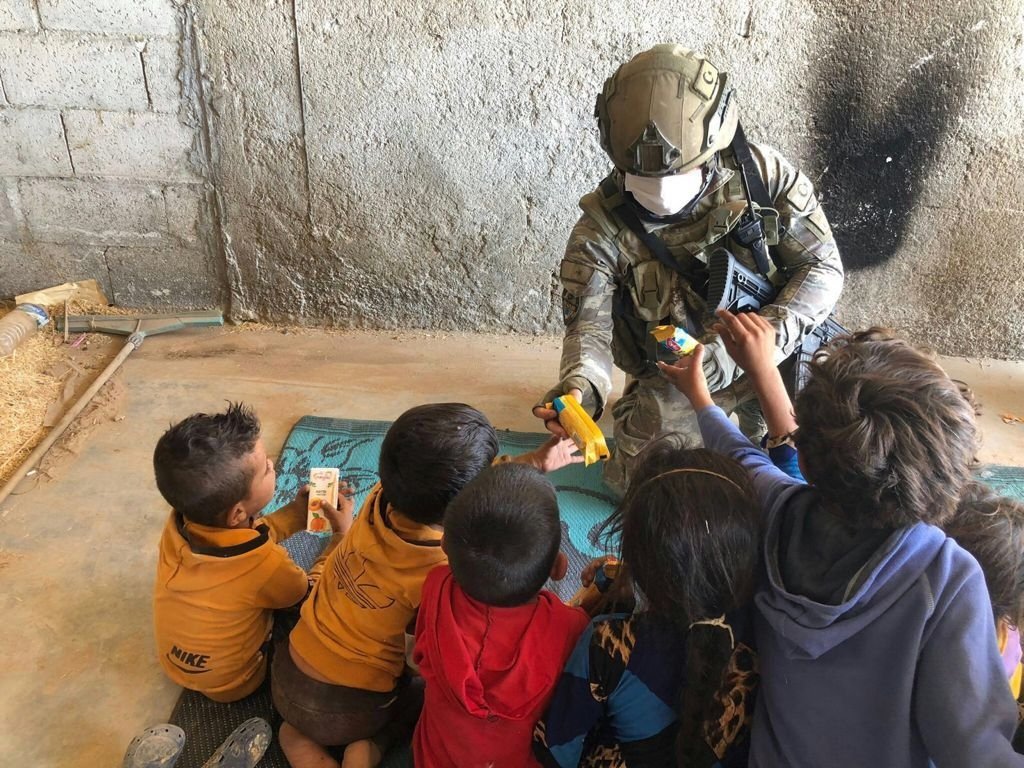 Turkish soldiers have made great efforts day and night to help meet the basic and humanitarian needs of people in the regions cleared of terrorism in northern Syria, Turkey's Defense Ministry said on Saturday.

In a statement made by the Ministry, it was emphasized that "Turkish soldiers, who inspire trust in friends, fear in enemies, and are an example of kindness and compassion, set an example for all humanity with their purity and solidity of heart, and Turkey will continue to extend its helping hand to the innocent and oppressed, and contribute to regional and global peace and stability."

It was stated that the biggest motivation for the Turkish Armed Forces (TSK), which is the guarantor of peace and tranquility, which performs heroic and self-sacrificing duties for the peace and security of Syrians in the regions cleared of terrorism in Syria, is smiling faces with hopeful and loving glances.

"Our heroic commandos, who provide an environment of security and peace, show great effort day and night to help meet the basic and humanitarian needs of the people of the region, especially children, women and the elderly; from food and shelter, from water and electricity to education and health," it added.

Turkey launched Operation Peace Spring on Oct. 9, 2019, to eliminate terrorists from northern Syria east of the Euphrates River in order to secure Turkey's borders, to aid in the safe return of Syrian refugees and to ensure Syria's territorial integrity.

The operation – conducted in line with the country's right to self-defense borne out of international law and United Nations Security Council resolutions – aimed to establish a terror-free safe zone for the return of Syrians in the area east of the Euphrates River that was then controlled by U.S.-backed YPG terrorists, who are the Syrian branch of the PKK terrorist group.

Since the launch of the operation, Turkey has been supporting every aspect of life in the region, from health to education and security to agriculture. In this respect, efforts to clear bombs and improvised explosive devices were launched and administration responsibilities were given to local councils.

The country also rolled up its sleeves to reconstruct hospitals, schools, mosques and roads destroyed by the YPG/PKK. Within the scope of rebuilding the region's social infrastructure, people were provided with food and clothing by several nongovernmental organizations (NGOs), while roads and buildings were rebuilt. These efforts have paid off as hundreds of displaced Syrians have started to return to the liberated areas.

The ministry also stated that the loading process of basic necessities donated to the Lebanese Armed Forces has started.

Turkey has long been behind humanitarian efforts for Lebanon. Following the 2006 war between Lebanon and Israel, it transferred $20 million worth of humanitarian aid through NGOs to the country. Ankara has also played a key role in building new schools. The Turkish Red Crescent has established 37 prefabricated schools, while Turkey's Disaster and Emergency Management Authority (AFAD) has undertaken the construction of another 20 schools. Likewise, the Turkish Cooperation and Coordination Agency (TIKA) has been active in Lebanon since opening an office there in 2014 and has run several projects on education and health, as well as restoration work for historical sites.