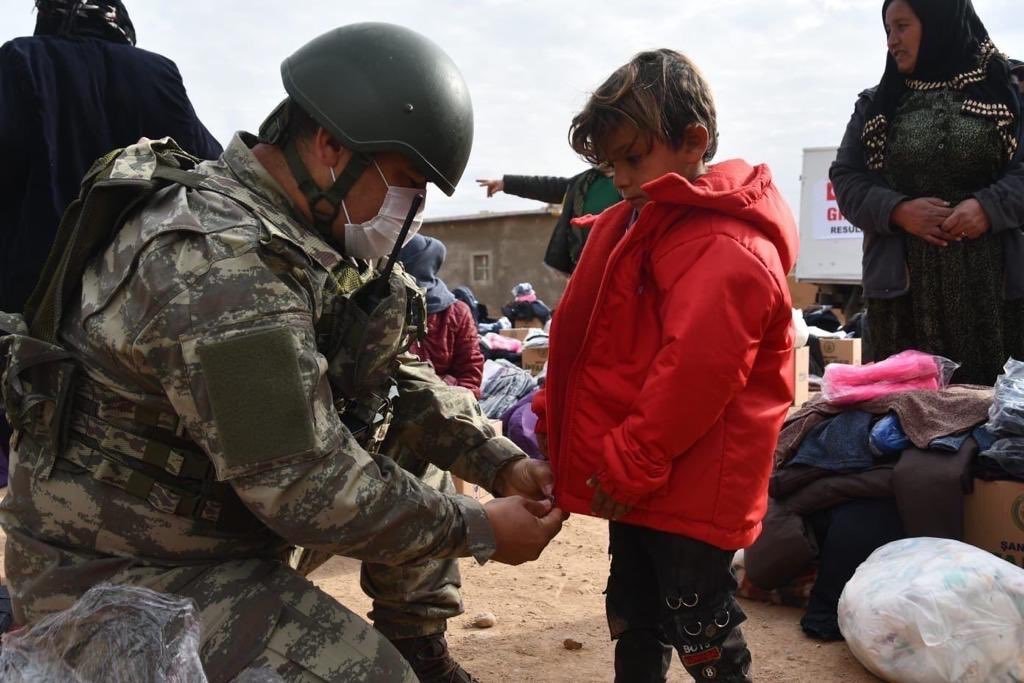 The Turkish soldiers carried out the distribution of the aid under the coordination of Turkey's Disaster and Emergency Management Authority, the ministry said.

On Oct. 9, 2019, Turkey launched Operation Peace Spring to eliminate terrorists with the YPG, the PKK's Syrian branch, from northern Syria east of the Euphrates River to secure Turkey's borders, aid in the safe return of Syrian refugees and ensure Syria's territorial integrity. Since then, Turkey has reached agreements with both the United States and Russia to force the terrorist group to withdraw from the planned terror-free zone.

Since the launch of the operation, Turkey has been supporting every aspect of life in the region, from health and education to security and agriculture. In this respect, efforts to clear bombs and improvised explosive devices (IEDs) were launched and administration duties were given to local councils. The country also rolled up its sleeves to reconstruct hospitals, schools, mosques and roads destroyed by the YPG. Within the scope of ameliorating the region's damaged social infrastructure, people were given food and clothing by several nongovernmental organizations (NGOs) while roads and buildings were rebuilt.

NGOs have also taken an important role in aid efforts in the region. One of these NGOs, the Humanitarian Relief Foundation (IHH) distributed 153 million loaves of bread to local people in a year, the foundation's vice president of Syria activities said Monday.

Cüneyt Kılıç said the bread was baked in 12 bakeries built near the borderline and 27 other bakeries which are supported by the foundation.

Saying that the foundation will continue to meet war victims' need for bread as it has for years, Kılıç added: "We regularly provide bread produced in bakeries we built in Hatay, Kilis and within Syria to war victim families. We are especially distributing in regions where civilians are having a hard time finding bread under war conditions."

As Kılıç stated, the distribution of bread concentrates on rural areas of Idlib and Aleppo and also Tal Abyad and Ras al-Ain.