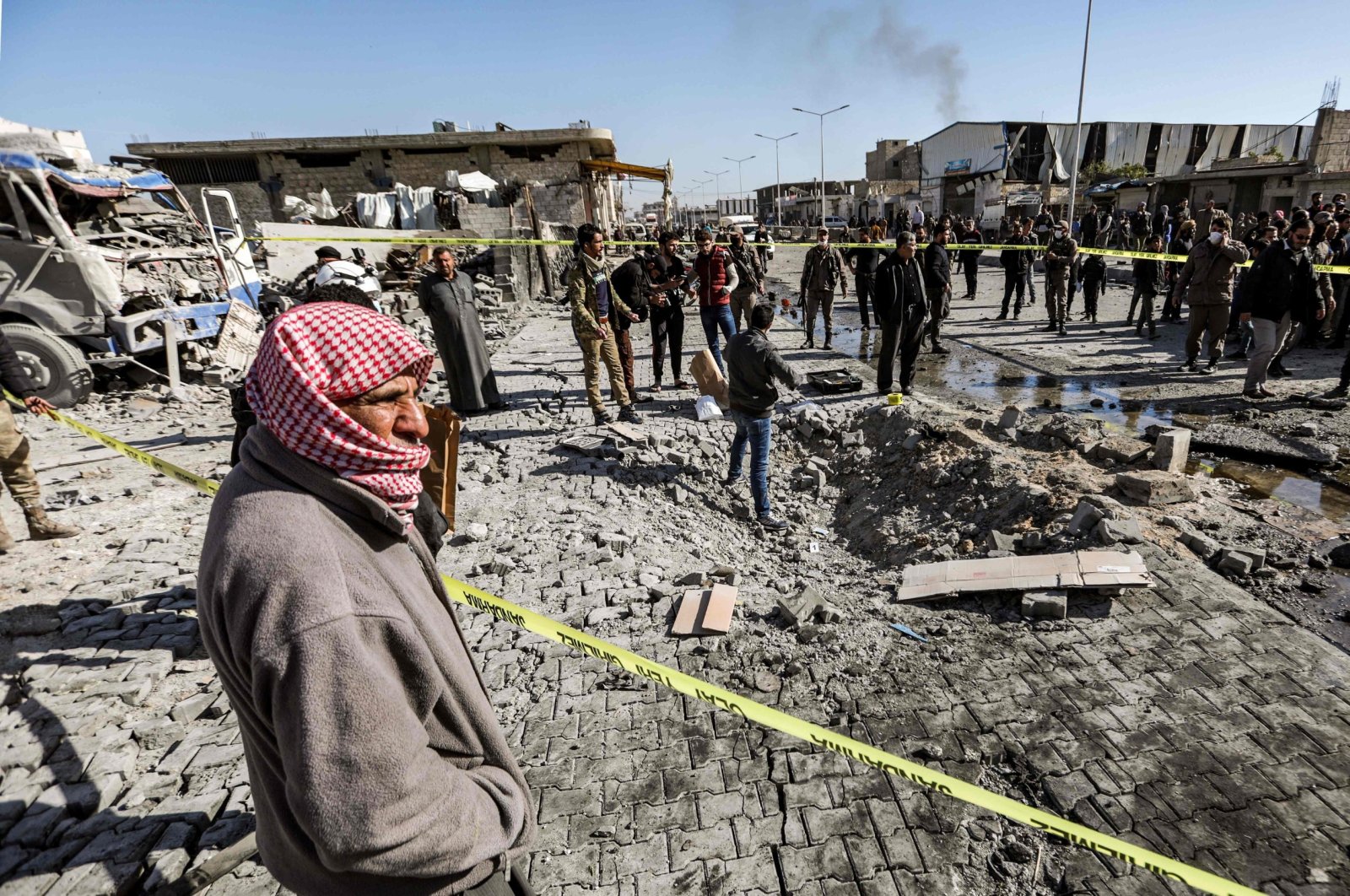 Residential areas of the district were targeted in over 10 separate missile attacks.

The YPG terrorist group often mounts attacks on Jarabulus, Afrin and Azaz from Syria's Manbij and Tel Rifat areas, which remain under its occupation.

“Two civilians lost their lives, and two others were injured. One of the injured is a volunteer in the White Helmets, in Hazwan village, east of Aleppo, hit by direct targeting with guided missiles fired from the areas controlled by the SDF and regime forces,” the White Helmets Syrian civil defense group wrote on Twitter, using another name for the YPG. The group added that it was deliberately hit and underlined that it is not a legitimate target.

Hadi Al-Bahra, co-chair of the Syrian Constitutional Committee, on Friday also touched on the issue, saying: "Innocent civilians in al-Bab, in the countryside of Aleppo, were targeted last night by the regime forces and its allies’ missile and artillery shelling. These military escalations in north and south of Syria prove the need for a comprehensive countrywide cease-fire."

Turkey’s Defense Ministry also condemned the attack in al-Bab and said, “In retaliation to these attacks by terrorists brutally murdering innocent civilians, terrorist targets were shot effectively with howitzers, artillery and mortars.”

Once ruled by Daesh terrorists, al-Bab was liberated three years ago in Operation Euphrates Shield, which was carried out by the Turkish Armed Forces (TSK) and the Syrian National Army (SNA).

Turkey launched Operation Euphrates Shield on Aug. 24, 2016, to eliminate the threat posed by Daesh and the YPG/PKK terrorists on Turkey's southern borders.

Following its liberation, most of al-Bab's residents have returned to the town.

Euphrates Shield is one of the three successful counterterrorism operations that Turkey launched since 2016 across its border in northern Syria to prevent the formation of a terror corridor and enable the peaceful settlement of residents. The other two are Olive Branch carried out in 2018 and Peace Spring in 2019.

The United States recognizes the PKK as a terrorist group, but works together with the YPG, ostensibly to fight Daesh. Turkey says using one terrorist group to fight another makes no sense.

Turkey strongly opposed the terrorist group’s presence in northern Syria and the formation of a terror corridor, which has been a major sticking point in strained Turkey-U.S. relations. Ankara has long objected to the U.S.' support of the YPG, a group that poses a threat to Turkey and terrorizes local people, destroying homes and forcing people to flee. While underlining that a country cannot support one terrorist group to fight another, Turkey conducted its own counterterrorism operations, over the course of which it has managed to remove a significant number of terrorists from the region.

Locals in YPG-controlled areas have long suffered from its atrocities. The terrorist group has a lengthy record of human rights abuses, ranging from kidnappings of suspected persons, recruiting child soldiers, torture, ethnic cleansing and forced displacement in Syria.

Turkey once again reiterated its condemnation of nations supporting the terrorist group.

“Countries that are encouraging the continuation of attacks that target peace and stability in our region through activities that constitute crimes by protecting the PKK/KCK-PYD/YPG terrorist organization despite Turkey’s goodwilled warnings and contrary to international law, are strongly condemned,” the Turkish National Security Council said in a statement late Thursday.

“States that establish illegal relations with terrorist organizations and that use terrorism as a foreign policy tool are reminded that it is inevitable their stance will lead to destructive consequences.”