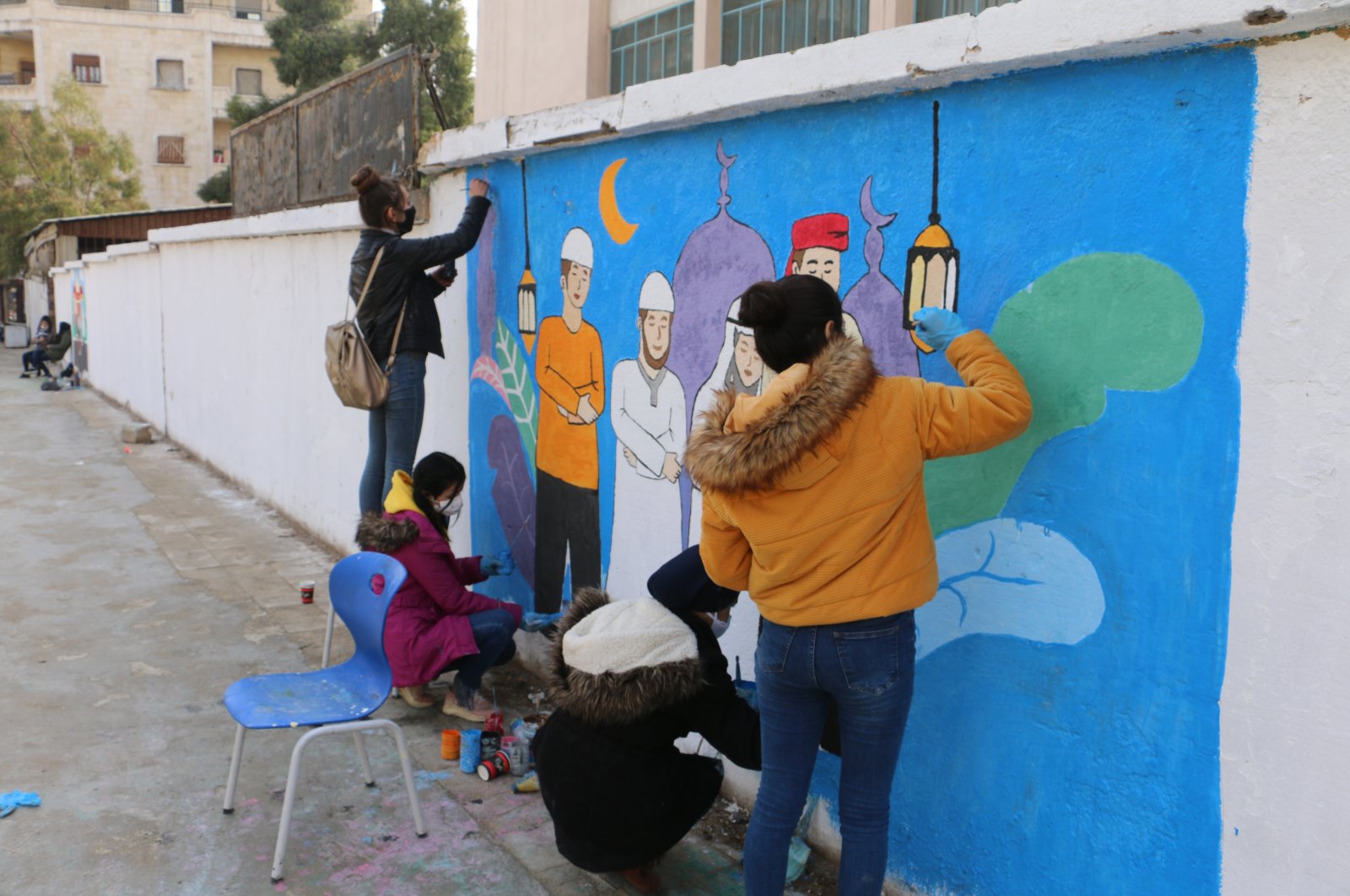 A group of Arabic and Kurdish young people decorates the walls of northern Syria's Afrin town with images and graffitis symbolizing brotherhood, tolerance and peace.

In Afrin, which was cleared of terror elements during Turkey's crossborder anti-terror Operation Olive Branch in 2018, local youth benefit from the atmosphere of peace and stability to turn their talents into art.

United under the name of Basmat Selam (Trace of Peace), volunteers' efforts have been supported by Afrin's local council and some nongovernmental organizations (NGOs).

The images drawn on the busiest streets of the town have been attracting the attention and admiration of local residents.

Beyazıd Beyazıd, one of the young volunteers, told the Anadolu Agency (AA) that Kurdish and Arabic youth coming together try to demonstrate the peace between local people through their street art with the support of the local council.

Stating that the images drawn by them are compatible with the Afrin people's traditions and values, Beyazıd said: "There are friends within our team who draw very beautiful pictures. They use their talents on walls."

Another volunteer, Sundus Fulfule, said they made the busiest streets of Afrin more beautiful with their drawings and added: "We do not have any discrimination between Arabs and Kurds. We live together, and we make programs moving together. Our drawings not only make walls beautiful but also make hearts beautiful. Our works of art created with the contribution of our young girls made a tremendous impact. Their impact will be long lasting."

Three years have passed since Turkey launched Operation Olive Branch to clear northern Syria’s Afrin district of terror groups. Since then, local people say they are satisfied with the secure and stable environment created as a result of the operation.

The operation was launched on Jan. 20, 2018, in cooperation with the Syrian National Army (SNA) and successfully ended on March 24, 2018, six days after Afrin was liberated from the occupation of the PKK terror group’s Syrian branch, the YPG.

After six town centers, 282 villages, 23 strategic mountains and hills and one dam were captured by the Turkish Armed Forces (TSK) and SNA, Turkish officials and NGOs rolled up their sleeves to revive the daily life in the region and started to deliver aid packages to civilians in the area.

Thanks to the measures taken by Turkish security forces, civilians, who had to flee the region due to the terror group's oppression and the following military operation, started to return to their homes on March 20, 2018. Since then, the population of the district reached 350,000 with rapid improvements in the region's infrastructure. The priority of the post-operation period for Turkish officials has been to strengthen the security of Afrin, enable the return of civilians and normalization of daily life.

In another effort to support the war victims of Syria, the Turkiye Diyanet Foundation (TDV) keeps offering education services to children in the northwestern Idlib and Azaz regions.

Ihsan Açık, the foundation's deputy chair of the board of trustees, said in a written statement that they, as a foundation prioritizing education, have been developing projects for the Syrian war victims' children to continue their education.

Saying that the TDV tries to meet the needs of victims from all over the world, Açık said that they believe that education will change the world in a positive direction.

"In Syria's Idlib and Azaz regions, we provide the education opportunity for nearly 8,000 students in a total of 12 education projects including a kindergarten, eight elementary schools, two high schools and a university laboratory," he told.

Almost a million people fled the Assad regime’s offensive on Idlib – the last opposition bastion – since December 2019 with many seeking refuge in overcrowded tent camps near the Turkish border. A fragile truce was brokered between Moscow and Ankara in March 2020 in response to the months of fighting by the Russia-backed regime, yet the regime still frequently carries out attacks on civilians, hindering most from returning to their homes and forcing them to stay in makeshift camps.