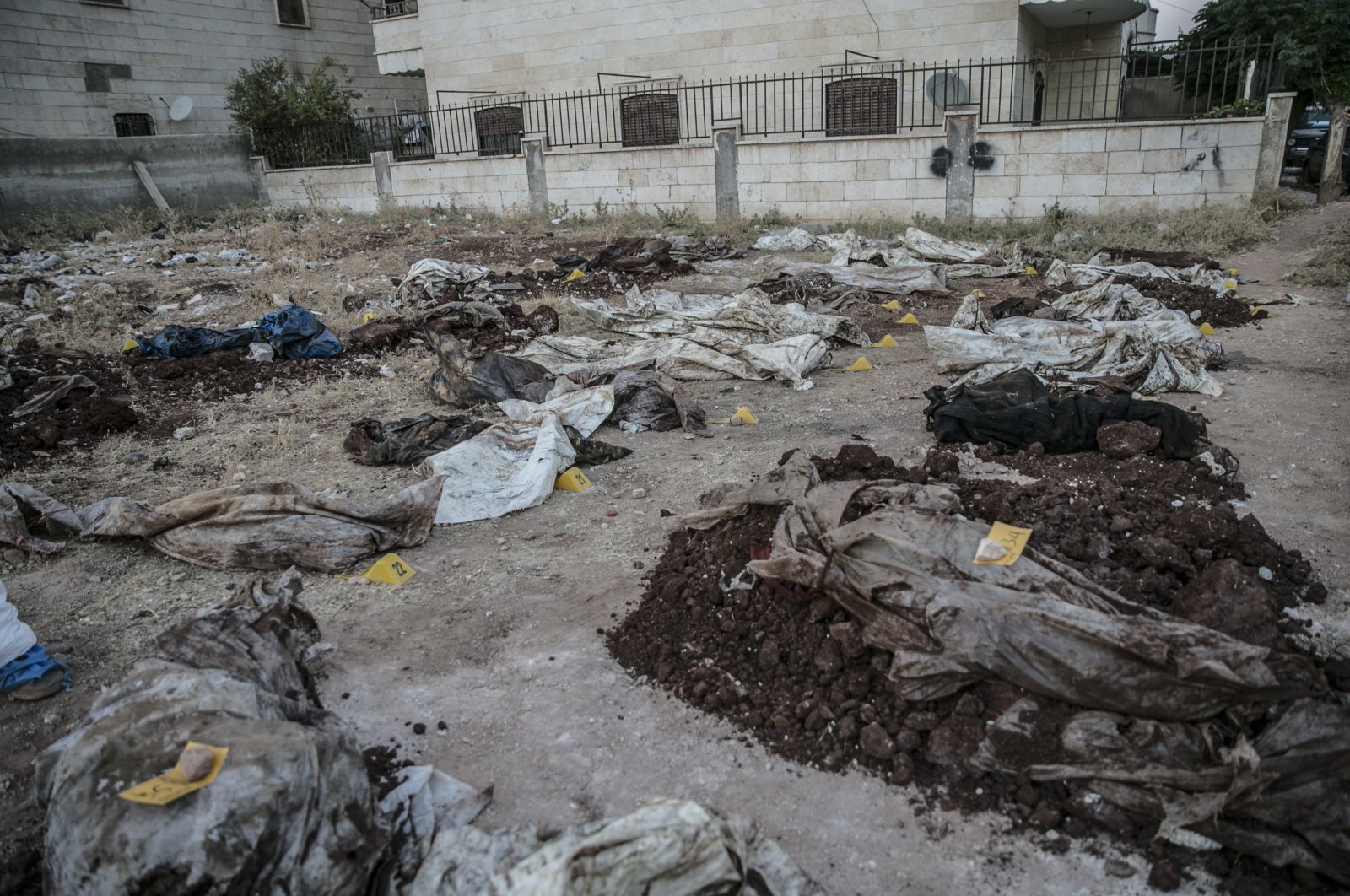 A mass grave has been uncovered in Afrin from a time when the YPG/PKK still controlled the region before Turkey's Operation Olive Branch, shining a light on the terrorist group's crimes against humanity

The PKK terrorist organization’s Syrian wing, the YPG, has buried 61 bodies in a mass grave in northern Syria’s Afrin in yet another crime against humanity, the Defense Ministry announced Wednesday.

"Another war crime of the terrorist organization PKK/YPG came to the light," the ministry said on Twitter.

According to the statement, after receiving information that the YPG/PKK terrorists had buried bodies in an empty plot of land in an Afrin neighborhood in January 2018, the area was excavated.

The statement noted that "35 bodies were found in sacks following the excavation conducted under the supervision of the prosecutor," adding that they fear more bodies will be found as excavations in the region continue.

However, according to a statement by the governor of southern Hatay province on Thursday, the number of bodies found has already risen to 61.

"These people that were massacred, were buried just in a neighborhood close to Afrin in graves that were opened with earth diggers and bulldozers. Yesterday, efforts started upon a notice," Rahmi Doğan stated, indicating that the number of bodies could increase.

"The local prosecutor, health units and local police are continuing their work. We want all international organizations and community to see this crime against humanity perpetrated by the YPG/PKK."

Doğan noted that the YPG, in another crime, targeted a hospital in Afrin last month, killing 14 civilians.

A recent United Nations report stated in May that the YPG has been recruiting children to fight among its ranks and that the organization has enlisted at least 400 children in the past two years.

Turkey aims to prevent the YPG from establishing a de facto autonomous region in northern Syria, which would border Turkey and connect the so-called northwestern Afrin canton to the Ain al-Arab and Jazeera cantons in the northeast.

Ankara describes this as a “terror corridor” that poses a grave security threat to its national security, pointing to its possible impact on the PKK’s activity around Turkish borders.

Since its liberation from the terrorist organization, the population of the district has gradually increased with rapid improvements in the region's infrastructure. The priority of the post-operation period for Turkish officials has been to strengthen the security of Afrin, enable the return of civilians and the normalization of daily life.

In search and scanning activities, military bases and ditches dug by the terrorist group, along with mines and other explosives planted by terrorists, were destroyed. In the district, seven local councils have been established to represent democratic rights for the local people. Local councils support various fields and activities including agriculture, industry, trade, culture, sports, health and education for the normalization and revival of life.

Most recently, Afrin has received electricity thanks to efforts by a local council that was established with Turkish support. Residents welcomed the improvement of their lives brought on by this recent development.

The local council established in Afrin in 2018 continues to assist residents. The council delivered uninterrupted cheap and clean electricity to residents via an agreement with a private company in Turkey after long-term studies were conducted.

Industrialists and civilians in the district were saved from the cost, and disturbing noises of generators, which could cause environmental pollution in the region.

After years of not having access to amenities, residents can now enjoy drinking cold water and use electrical appliances to cool off in the scorching summer months.

Electricity was first made available in the district center and efforts are underway to deliver uninterrupted electricity to rural areas.

The widespread use of electricity networks throughout the district will have a positive effect on agriculture and other industries.