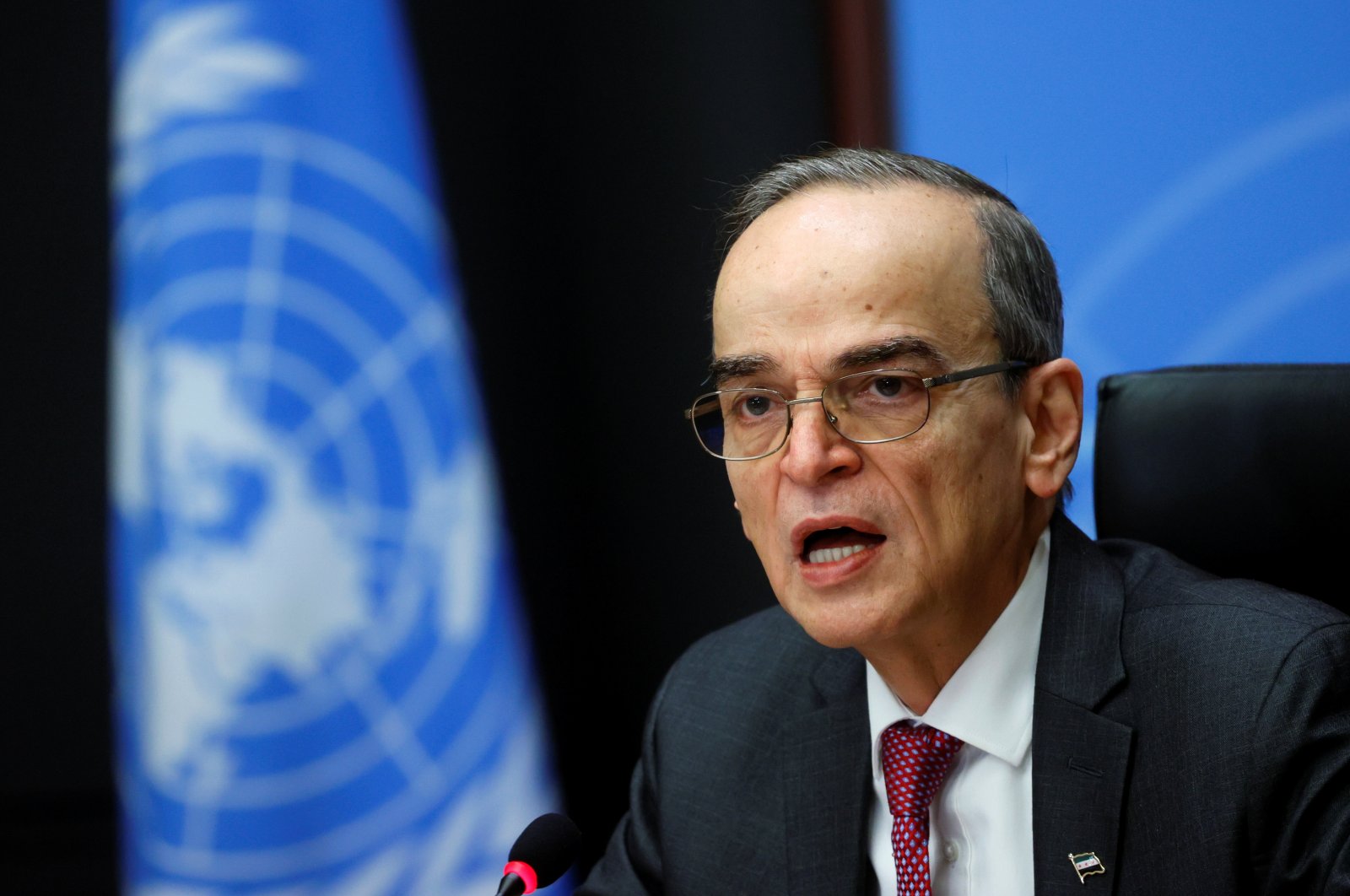 Hadi al-Bahra, co-chair for the Syrian opposition, attends a news conference after a meeting of the Syrian Constitutional Committee at the United Nations in Geneva, Switzerland, Jan. 29, 2021. (Reuters Photo)
by Nur Özkan Erbay Feb 03, 2021 1:30 pm

The regime refuses to formulate a methodology for drafting a new constitution that lives up to the aspirations of the Syrian people, the Syrian opposition's committee co-chair stressed after the end of a fifth round of talks

The time has come for the world to face the well-known reality of the Bashar Assad regime’s lack of seriousness toward the political process aimed at finding a solution to the country’s ongoing war, Hadi al-Bahra, the Syrian opposition's co-chair of the United Nations-facilitated constitutional committee, said Tuesday.

“Starting from the second Geneva negotiations in 2014 to the present day, the Syrian Revolutionary and Opposition Forces have proved to the Syrian people and the international community over and over again their commitment to the process while the regime's attitudes and practices have shown that it has no intention or seriousness toward any political solution,” al-Bahra told Daily Sabah.

He underlined that the opposition has exerted every effort from the establishment of the committee to the fifth session held in Geneva last week and “had an agreed and defined agenda that the representatives of the regime did not comply with.”

“This led to the obstruction of the work of the committee,” al-Bahra pointed out, elaborating that the regime rejected the opposition’s proposal regarding a methodology to structure the discussions and also refused to provide its own proposal for a methodology. During the talks, the opposition had prepared and presented the 10 main principles of the Syrian constitution to the Syrian Constitutional Committee.

He noted that the regime also rejected the proposal made by U.N. Special Envoy for Syria Geir Pedersen in this regard.

Talks on a new constitution for Syria hit a wall last week, with Pedersen concluding, "We can't continue like this."

The fifth round of discussions between 15 representatives each from the Assad regime, the opposition and civil society, staged all week at the U.N.'s office in Geneva, concluded with little to no progress.

Pedersen hinted the Syrian regime delegation was to blame for the lack of progress. The U.N. envoy said he presented a proposal to the heads of the regime and opposition delegations, adding that his proposal was rejected by the regime team and accepted by the opposition.

The opposition has frequently voiced that the regime uses the political process to waste time until it can reimpose itself on the international community again.

“They also rejected our proposal for setting a time frame for the process,” al-Bahra continued. “We have suggested that the duration of each session should be three consecutive weeks while the break between the two sessions should be one week.”

He said that the regime also refused to put forward a proposal for formulations of basic constitutional principles, insisting on limiting their proposals within the framework of preparation and discussion of the principles outside the context of constitutional formulations.

According to al-Bahra, the regime presented a paper that included political positions that are not suitable for principles or constitutional foundations, and “they had already presented this same paper during the fourth session.”

He indicated that this move proved the regime was not committed to the agenda set for the fifth session and wanted to continue with the agenda of the third and fourth sessions.

“International will and international consensus” are needed to put pressure on the regime, or any other entity that disrupts the process, in order to reach a comprehensive and sustainable political solution to the Syrian crisis, he underlined, saying that the opposition fulfilled its national duty and worked in coordination with the U.N.