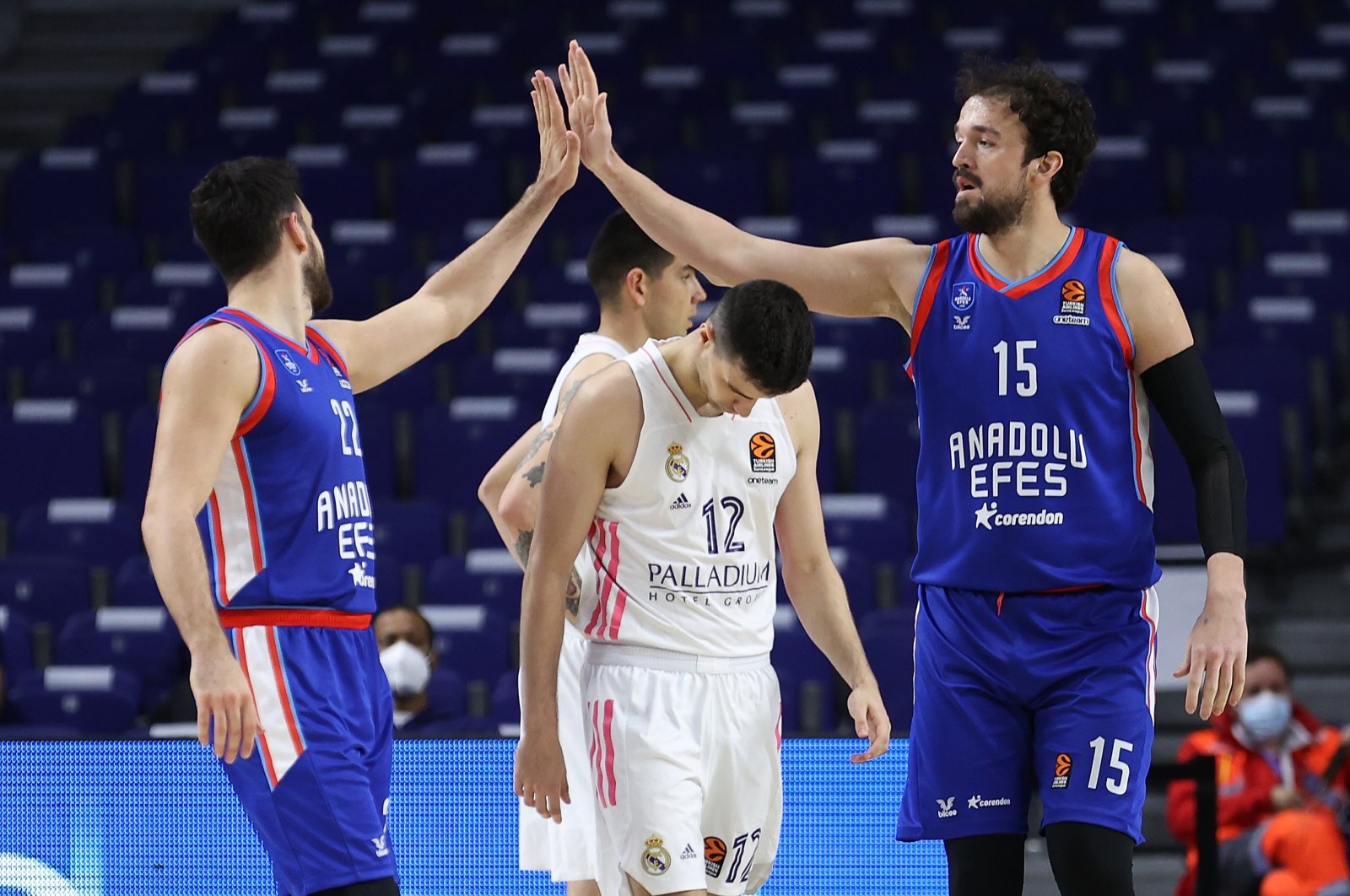 The Istanbul duo was also accompanied by CSKA and Milan after all four picked up convincing road wins. CSKA beat Zenit St Petersburg 74-86, while Milan clinched a 72-93 victory against Zvezda.

CSKA Moscow and Anadolu Efes now have 21 wins each, one more than both AX Armani Exchange Milan and Fenerbahçe, according to the EuroLeague’s official website.

These four teams joined league-leader FC Barcelona, who despite a 99-94 loss to Maccabi Tel Aviv, had already secured a playoff spot.

Anadolu Efes clinched its playoff place with an 83-108 thumping of Real Madrid in the Spanish capital.

The runner-up of the 2018/19 season took its record to 21-11 and remained in third place in the standings, inching closer to securing a home-court advantage, while Real dropped to 18-14 on the season.

The host led 42-41 at halftime, but Efes needed just a quarter and a half to score 56 points and open a 25-point lead midway through the fourth quarter en route to a resounding victory.

Sertaç Şanlı finished as Efes' top scorer with 17 points in 18 minutes. Shane Larkin scored all of his 16 points in the final 11 minutes of the game and Krunoslav Simon scored 13 of his 15 points in the first quarter. Vasilije Micic finished with 13 points and six assists, Rodrigue Beaubois had 12 points, Chris Singleton 11 and Bryant Dunston 10.

Fenerbahçe also raced through to the playoffs by downing Bayern Munich 68-77 at Audi Dome.

The 2017 EuroLeague champion improved its record to 20-12 and punched its playoffs ticket after its victory combined with CSKA Moscow's win against Zenit St. Petersburg.

In the meantime, Bayern, which would have reached the playoffs with a win, dropped to 19-13.

Fenerbahçe led 15-18 after 10 minutes and kept a 34-35 edge at halftime. The guests found a go-to person in Guduric, who joined forces with Vesely to boost Fenerbahçe’s lead to 44-53 after 30 minutes. Fenerbahçe went on to control the rest of the game until the final buzzer.

In Belgrade, Zvezda suffered a 72-93 loss to Milan. The visitor led from tip to buzzer in routing at the Aleksandar Nikolic Hall in the Serbian capital.

The victory lifted Milan's record to 20-12 and coupled with Real Madrid's loss to Anadolu Efes, secured it a spot in the EuroLeague Playoffs for the first time since 2014.

Kevin Punter shined with 23 points against his former team to lead the Zvezda attack. Zach LeDay and Shavon Shields added 14 points each with the latter dishing 5 assists. Kyle Hines scored 11 and Sergio Rodriguez delivered 8 assists. Jordan Loyd led Zvezda with 22 points and Ognjen Dobric scored 14 as the team fell to 9-23 on the season.

CSKA improved to 21-10 and registered its third consecutive win. Meanwhile, Zenit dropped to 17-14 and slipped out of the playoff zone.

Johannes Voigtmann led the winners with 21 points, Toko Shengelia added 14 and Daniel Hackett and Will Clyburn each scored 13 for CSKA.

Billy Baron led Zenit with 24 points, Will Thomas scored 13 and Kevin Pangos 12 for the hosts. Michael Eric, Hackett and Voigtmann helped CSKA to an 18-22 lead after 10 minutes.

CSKA extended its lead to 42-48 at halftime and then again to 50-61 late in the third quarter. Voigtmann and Shengelia made sure they kept CSKA way ahead until the final buzzer.

Zalgiris Kaunas, in the meantime, was unlucky as it did its part to remain alive in the race for the playoffs with a come-from-behind 96-86 victory at home over ALBA Berlin but still was eliminated later when Baskonia bested Panathinaikos OPAP Athens 82-97.