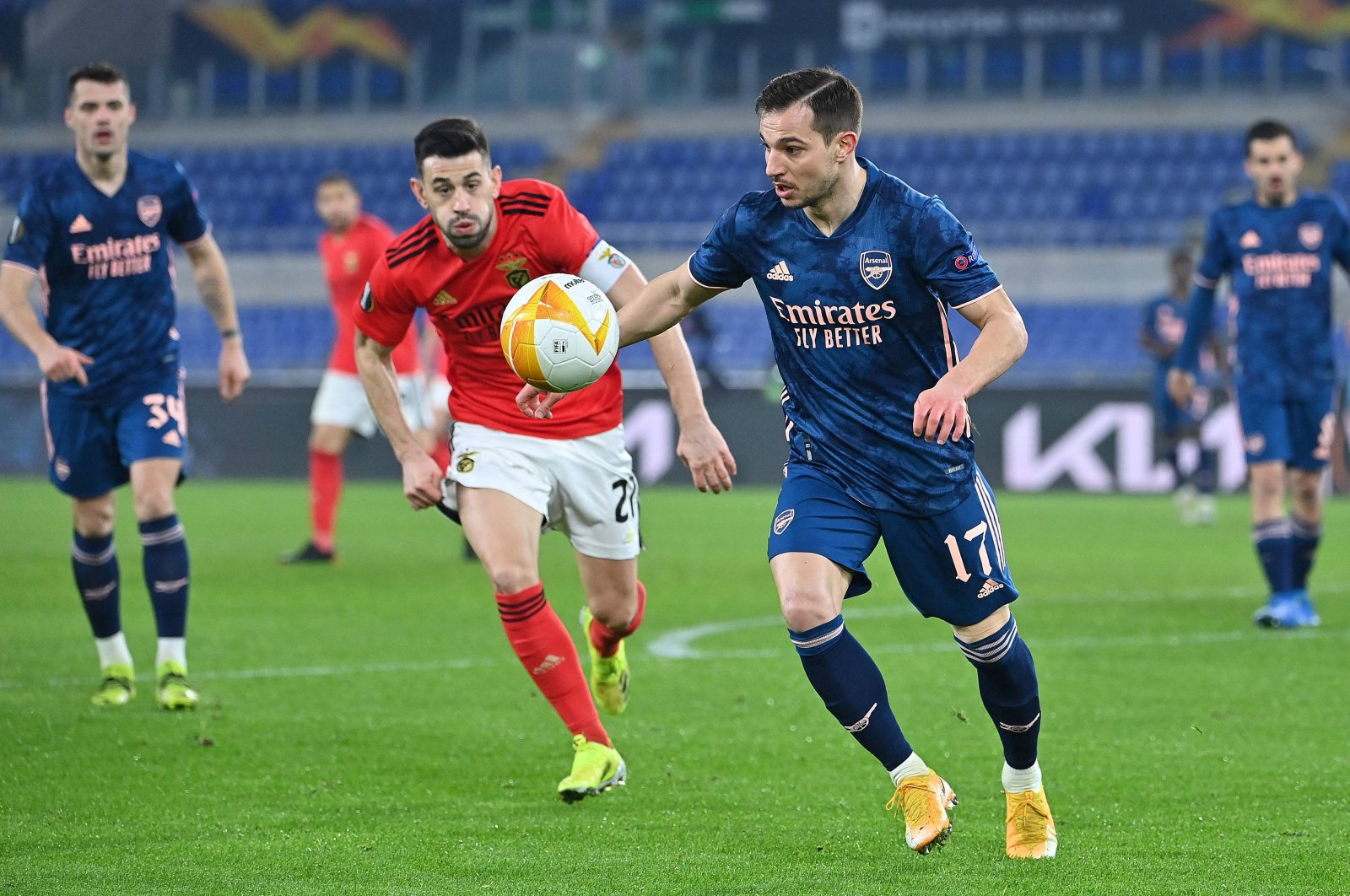 COVID-19 restrictions mean Arsenal will play the home leg of its Europa League last-32 tie against Benfica on Thursday in Greece, with the Gunners one of five British sides looking to secure a spot in the draw for the next round.

Mikel Arteta's Arsenal went to Rome last week to play the first, away leg of its tie against Benfica due to travel restrictions between the U.K. and Portugal, and those same restrictions saw the return moved from London to Greece, with the Karaiskakis stadium in the Athens port of Piraeus, home of Olympiakos, the venue for Thursday's encounter.

Perhaps ominously, it was Olympiakos who knocked the Gunners out of last season's Europa League but Arsenal will hope to get the better of Benfica after drawing 1-1 in Rome, where Bukayo Saka's equalizer gave them the advantage on away goals heading into the return.

With Arsenal sitting in mid-table in the Premier League, this competition presents the only viable route into next season's Champions League for Arteta's team. Benfica, meanwhile, is seeking solace in Europe having won just once in seven Portuguese league games to drop to fourth, a huge 15 points behind leaders Sporting.

Man Utd as good as through

Manchester United already has one foot in the last 16 after an emphatic 4-0 win over Real Sociedad last week, making the most of the fact the first leg of that tie was switched from Spain to Italy after the Spanish government introduced a ban on arrivals by air from the U.K.

It hardly seems especially fair on La Real that, having been deprived home advantage in the first leg, it now has to go to Old Trafford for the return, but this match is effectively now a dead rubber after a brace by Bruno Fernandes helped Ole Gunnar Solskjaer's side cruise to victory in Turin.

Meanwhile, Leicester City, who is behind second-placed United in the Premier League only on goal difference, does have work still to do in the return leg of its tie at home against Czech champions Slavia Prague after a 0-0 draw last week.

The draw for the last 16 takes place Friday, with Tottenham Hotspur expected to feature too, having won 4-1 in the first leg of its tie against Wolfsberg of Austria, a match that was played in Budapest. Its return is on Wednesday.

Steven Gerrard's Rangers need just seven points from its last eight games to clinch the Scottish title and so they can focus their energy on Europe, as they look to reach the Europa League last 16 for the second season running.

The Glasgow giants came from behind twice to win 4-3 in Belgium in the first leg against Antwerp last week, with Borna Barisic's second penalty of the game, in the last minute, proving decisive. At home this season, even without fans, the Rangers have been untouchable, with 18 wins and a draw in 19 games and just seven goals conceded.

The fitness of prolific right-back James Tavernier, who came off in the first leg, could be crucial.

The first meeting of two former European champions in AC Milan and Red Star Belgrade lived up to expectations, with the Serbians twice coming from behind to draw 2-2 at home in last week's first leg, Milan Pavkov scoring its second equalizer in injury time.

That game was overshadowed by accusations of racist abuse aimed at Zlatan Ibrahimovic, with Red Star condemning insults addressed to the veteran Swede, whose father is Bosnian.

N1 regional television broadcast scenes of Ibrahimovic, who did not play but was sitting at the stadium, as the voice of a man chanting to him "stinky Balija" several times could be heard. The latter is a pejorative name for Bosnian Muslims used by Serbian nationalists.

The episode should add spice to the return leg as Milan look to put behind them the disappointment of its defeat by Inter in last weekend's derby.