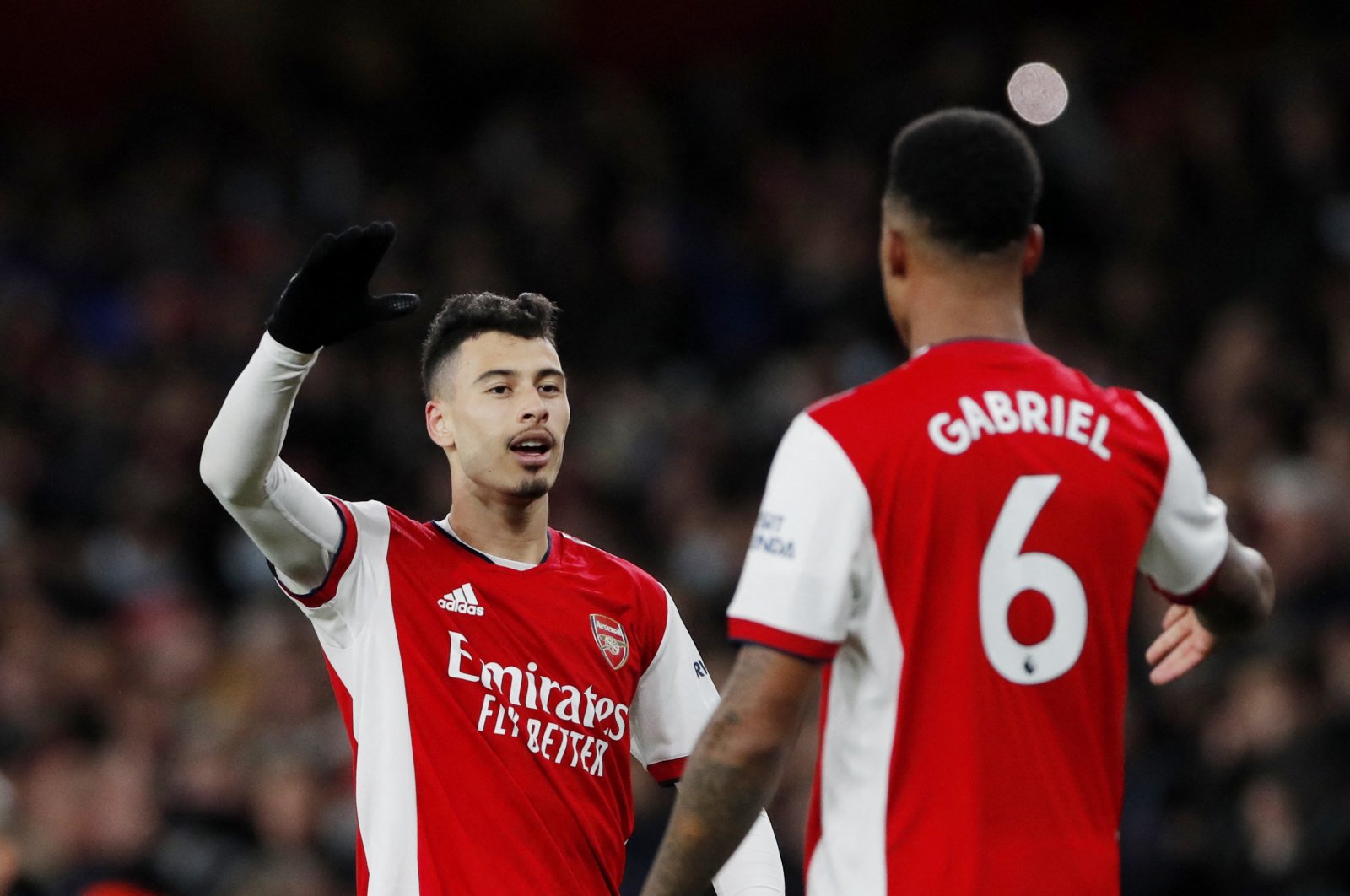 Arsenal looked like it has weathered the storm by moving back into the Premier League top 4 with a 2-0 derby win over West Ham on Wednesday.

It could have been a more comfortable night for Arsenal had Alexandre Lacazette, the captain again in place of the disciplined Pierre-Emerick Aubameyang, not had his penalty saved midway through the second half.

West Ham, for whom Vladimir Coufal was red-carded after conceding the penalty, failed to produce the kind of form that has seen it stationed in the top four since October.

The Hammers huffed and puffed and threatened sporadically but home keeper Aaron Ramsdale's only real save was from a Jarrod Bowen effort shortly after Martinelli's opener.

Victory hoisted Arsenal up two places into the fourth spot with 29 points from 17 games with West Ham on 28.

The pre-match build-up had been dominated by Arsenal's decision to strip Aubameyang of the captaincy for another lapse of discipline. But just as in the comfortable win against Southampton at the weekend, Arsenal did not miss him.

Mikel Arteta's side responded with a vibrant second-half display after a rather scrappy opening half-hour, with French forward Lacazette, who also wore the armband against Southampton, leading by example.

Disappointing as they were, West Ham's players were furious at Anthony Taylor's decision to show Coufal a second yellow card.

Replays showed he had made contact with the ball before sending Lacazette tumbling for the penalty, although Moyes was in no mood to make excuses.

"I didn't think a lot of our performance generally, Arsenal played well with good intensity and we couldn't deal with it," Moyes said. "(Coufal) got the ball but he should have got more of the ball."

A frantic opening half saw West Ham's Craig Dawson slice the first chance of the night high and wide while Pablo Fornals curled a right-footed effort wide for the visitors.

But as halftime approached Arsenal was dominating and was close to taking the lead when Kieran Tierney's fiercely-struck shot was touched on to the crossbar by keeper Lukasz Fabianski.

Fabianski was then alert to keep out Lacazette's shot before Dawson produced a goal-saving tackle to stop Martinelli from pouncing on the rebound.

It did not take Arsenal long to take the lead in the second half as Lacazette was given too much space and time to slide a pass through to Martinelli who calmly shot past Fabianski.

Lacazette was a constant menace and went down under a challenge from Coufal and the referee pointed to the spot, before showing the Czech defender a second yellow card.

Fabianski saved Lacazette's spot kick and as further chances went begging it seemed Arsenal might pay for its failure to finish off the lackluster visitors.

But Smith Rowe came off the bench and soon raced on to a pass by the impressive Bukayo Sako before curling home left-footed to make the points safe.

While Arsenal was hit by the coronavirus before their opening game of the season at Brentford, it has so far avoided the recent positive test plunging the league into turmoil.

Watford's match at Burnley was postponed less than three hours before kick-off on Wednesday after "an ongoing COVID outbreak" left the Hornets with insufficient players to fulfill the fixture.

It was the third Premier League game to be postponed due to COVID-19 in four days as the new omicron variant causes havoc in England's top-flight.

Tottenham's trip to Brighton last Sunday was called off due to an outbreak at the north London club, while Manchester United's match at Brentford on Tuesday was canceled after the Old Trafford club's positive tests.

United, Tottenham, Brighton, Leicester, Norwich and Aston Villa had already been hit by the virus over the last week.

Also on Wednesday, Leicester manager Brendan Rodgers said the Premier League had rejected an appeal from both clubs to postpone its match against Tottenham on Thursday.

Leicester is currently without nine players because of COVID-related issues and injuries.

Brighton boss Graham Potter had dealt with several COVID cases in his squad this week and his problems mounted as Wolves won 1-0 at the Amex Stadium.

Potter's side is without a win in 12 games in all competitions after Romain Saiss volleyed home in first half stoppage-time.

Jordan Ayew ended his 47-game goal drought to give Crystal Palace a 2-2 draw against Southampton at Selhurst Park.