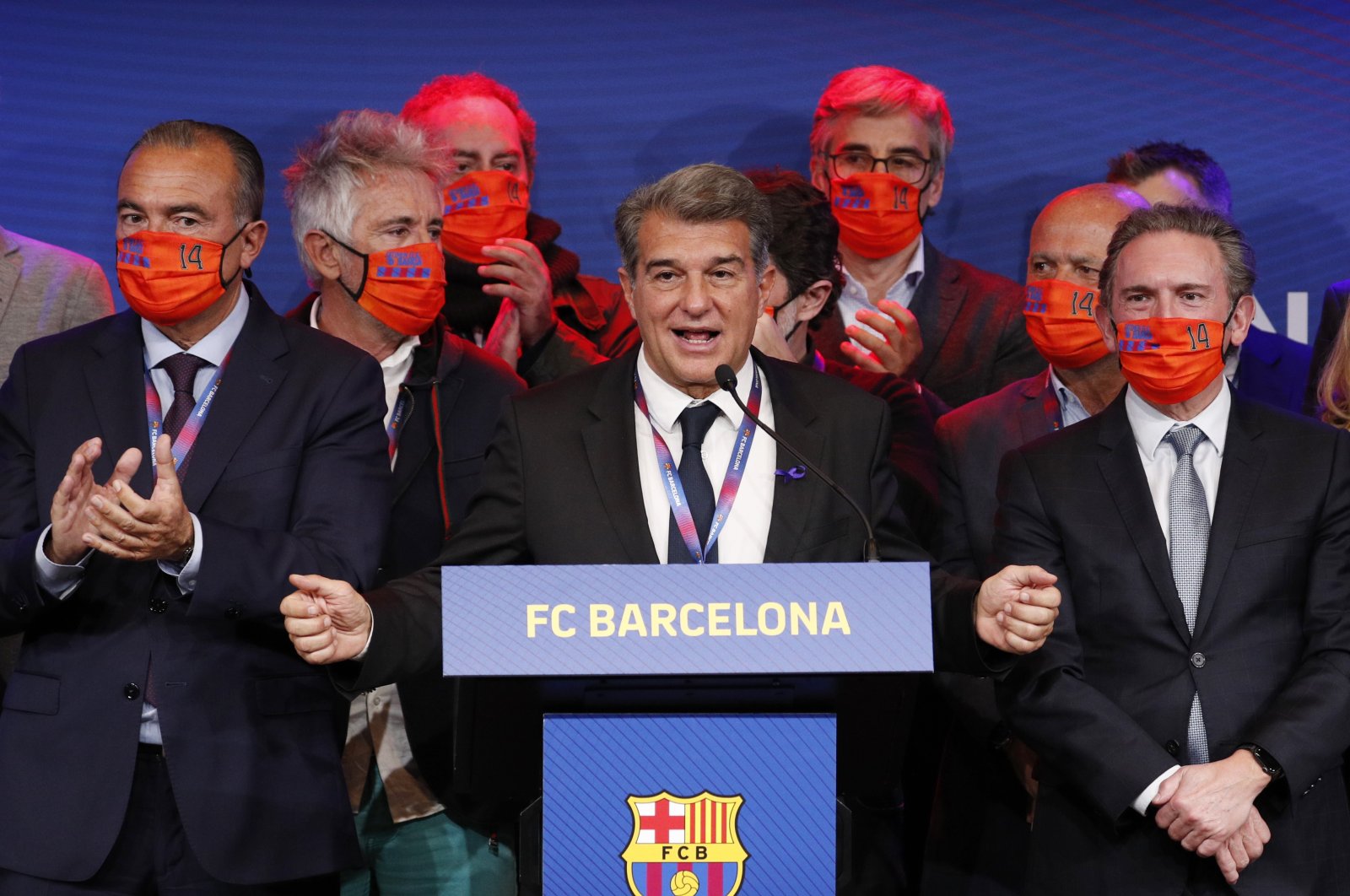 Former Barcelona president Joan Laporta was elected as the head of the Catalan club again on Sunday, taking charge of a team in crisis and facing daunting problems that include a huge debt and the possible departure of its superstar Lionel Messi when his contract finishes at the end of the season.

“The fact that the best player in the world came to vote today, along with his son, is proof that Leo loves Barca,” Laporta said. ”Together we will convince him to stay."

Laporta defeated businessman Víctor Font and longtime board member Toni Freixa, the other two candidates who were among the more than 110,000 members eligible to vote. The election was held just days after the club’s last elected president Josep Maria Bartomeu spent a night in jail while Catalan police investigated possible irregularities during his administration. Bartomeu has denied any wrongdoing.

The club posted a video of Laporta celebrating the victory along with his campaign team, jumping and chanting “Barca, Barca, Barca...”

The election, which was postponed from January because of the coronavirus pandemic, caps a week in which the club made worldwide headlines after a police raid at the team's headquarters led to arrests and further embarrassment for an institution that has long prided itself as “more than a club.”

The police investigation was related to the so-called “Barcagate,” which involved allegations that the former executive board hired an internet services company to spread negative messages about its own players and opponents on social media to boost the image of senior club officials.

Laporta, who has a five-year term, was the team’s president between 2003-2010, during Messi’s breakout seasons for the senior team. The 58-year-old Laporta has said all along during his campaign that he was the best candidate to convince the playmaker to stay.

He has known Messi since not long after the Argentina great joined the Spanish club after leaving his home country with his family. Messi's professional debut with Barcelona came as a 17-year-old in 2004, with Laporta already in charge.

Messi’s future was a key campaign issue as he can leave the club for free at the end of his contract this summer. He was upset with Bartomeu after the former president denied his request to leave at the end of last season.

At the start of his first stint as president, Laporta chose the equally inexperienced Frank Rijkaard as his first coach, and brought in Ronaldinho, Samuel Eto’o and Deco to team up with in-house talents Carles Puyol and Xavi Hernández. Messi quickly moved up through Barcelona’s youth teams and joined the senior squad in 2004. The team took off and won two Spanish league titles and the club’s second European Cup in 2006.

When that team began to falter, Laporta made another bold move by replacing Rijkaard with the untested Pep Guardiola and selling Ronaldinho. Guardiola retooled the team around Messi, Xavi and Andrés Iniesta, sparking the most glorious period in the club's history.

Laporta tried to unseat Bartomeu in a 2015 election, but Bartomeu won with the team coming off a triple sweep of the Champions League, Spanish league and Copa del Rey.

Members, including Messi and other players, voted at the team’s Camp Nou Stadium and other polling stations in northeast Catalonia and neighboring Andorra. Voting by mail also was allowed in certain circumstances.

The election was called after Bartomeu and his board resigned in October facing a possible no-confidence referendum by club members angry about the team’s trophy-less 2019-20 season – the first since 2007-08. The season ended in a humiliating 8-2 loss to Bayern Munich in the Champions League quarterfinals.

The club has qualified for the Copa del Rey final and is second in the Spanish league this season. It won 2-0 at Osasuna on Saturday. Barcelona lost 4-1 to Paris Saint-Germain in the first leg of the round of 16 of the Champions League.

The new president will face problems that include the possible departure of Messi at the end of the season and a debt of more than 1 billion euros ($1.2 billion) brought on in large part by the coronavirus pandemic but also by one of the highest payrolls in soccer.

Of the three candidates, 52-year-old Freixa was the only one who has guaranteed that coach Ronald Koeman would remain in place to see out his contract through the end of next season. The 48-year-old Font, by contrast, had promised to bring back midfield great Xavi in some capacity, either as sports director or as the coach.

Font was the only outsider among the candidates who had no experience at the club’s administration. He had been calling for renewal at the club.

Freixa was a Barcelona board member from 2010-15. He rejected its portrayal as a club on the brink of collapse and had said he could win as an underdog.