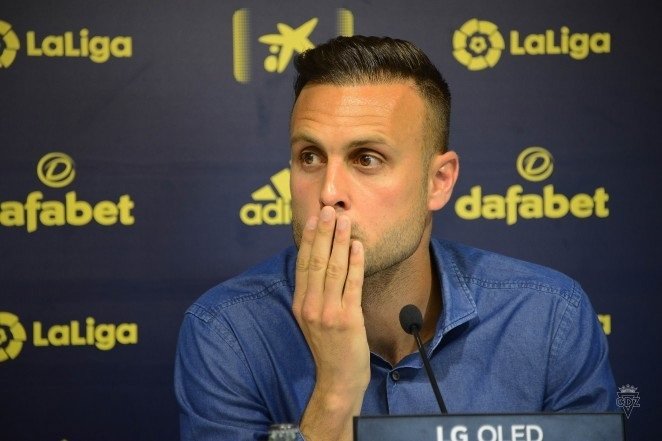 Cadiz's Spanish defender Juan Cala has vehemently denied racially insulting Valencia's Mouctar Diakhaby during Sunday's La Liga game and insisted he has been the victim of a "circus" and a "witch-hunt."

Cala gave a press conference on Tuesday afternoon, during which he defended himself against accusations he racially insulted Diakhaby.

He also threatened to sue anyone making the allegations and when asked if he would also take legal action against Diakhaby, Cala said: "That is something for my lawyer. What I can tell you is I will defend my honor."

La Liga is investigating the incident, with Valencia the first top-flight team in Spain to walk off the pitch during a match in protest against racist abuse.

Valencia's players left the field in the 29th minute of the game against Cadiz before returning around 15 minutes later to resume but without Diakhaby, who was substituted.

The club initially said the team returned at the request of Diakhaby but later shifted the emphasis, insisting it was "forced" to continue under threat of punishment and a points penalty.

Earlier on Tuesday, Diakhaby spoke for the first time about the incident through a video posted on social media.

He said: "A player (racially) insulted me ... That is intolerable, I cannot allow that and you have all seen my reaction."

Diakhaby also claimed a Cadiz player asked if Valencia would return to the pitch if Cala agreed to apologize.

"My teammates and I said no, that there are things you can't just apologize for and let it pass," Diakhaby said.

The statement said the club was "deeply saddened" by Cala's response and added he had "missed a great opportunity to accept his mistake and apologize."

Cala had not spoken publicly since the game and began his press conference by saying he had been "forced to appear." He denied racially insulting Diakhaby, claiming he told the Frenchman: "Leave me alone."

"I never said it," Cala said. "Everything he says is false. If there was a Cadiz player that said I would apologize, I will quit football. This is a media witch-hunt."

"Either he made it up or he understood something else when I said 'Leave me alone,'" Cala continued.

"I will take legal action against all the people who have tried to discredit me.

"There are two victims here: a player who is accused and another who believes he is the victim of a racist insult."

Cala also said he was "astonished and embarrassed" when Valencia left the pitch and said a number of times, "there is no racism in Spanish football."

"There are black players on all teams, they are all super-integrated," he said.

If Cala is found guilty, Cadiz could be sanctioned, while the club has also raised the possibility of punishing Cala themselves.

"Anyone guilty of such an offense, whether or not they belong to our team, must be punished," a club statement read Sunday.

Referee David Medie wrote in his match report that Diakhaby told him that Cala had racially insulted him but none of the refereeing team heard it.

Valencia released a video on Monday afternoon of first-team players and staff standing behind Diakhaby on the club's training pitch in a show of support.

Valencia coach Javi Gracia and defender Jose Luis Gaya both said the team was told in the changing rooms they would be punished if they did not resume.

"In the changing rooms we were told if we didn't return, we would be sanctioned," said Gracia.

"We went back out to play because they told us they could penalize us with three points and something more," said Gaya.