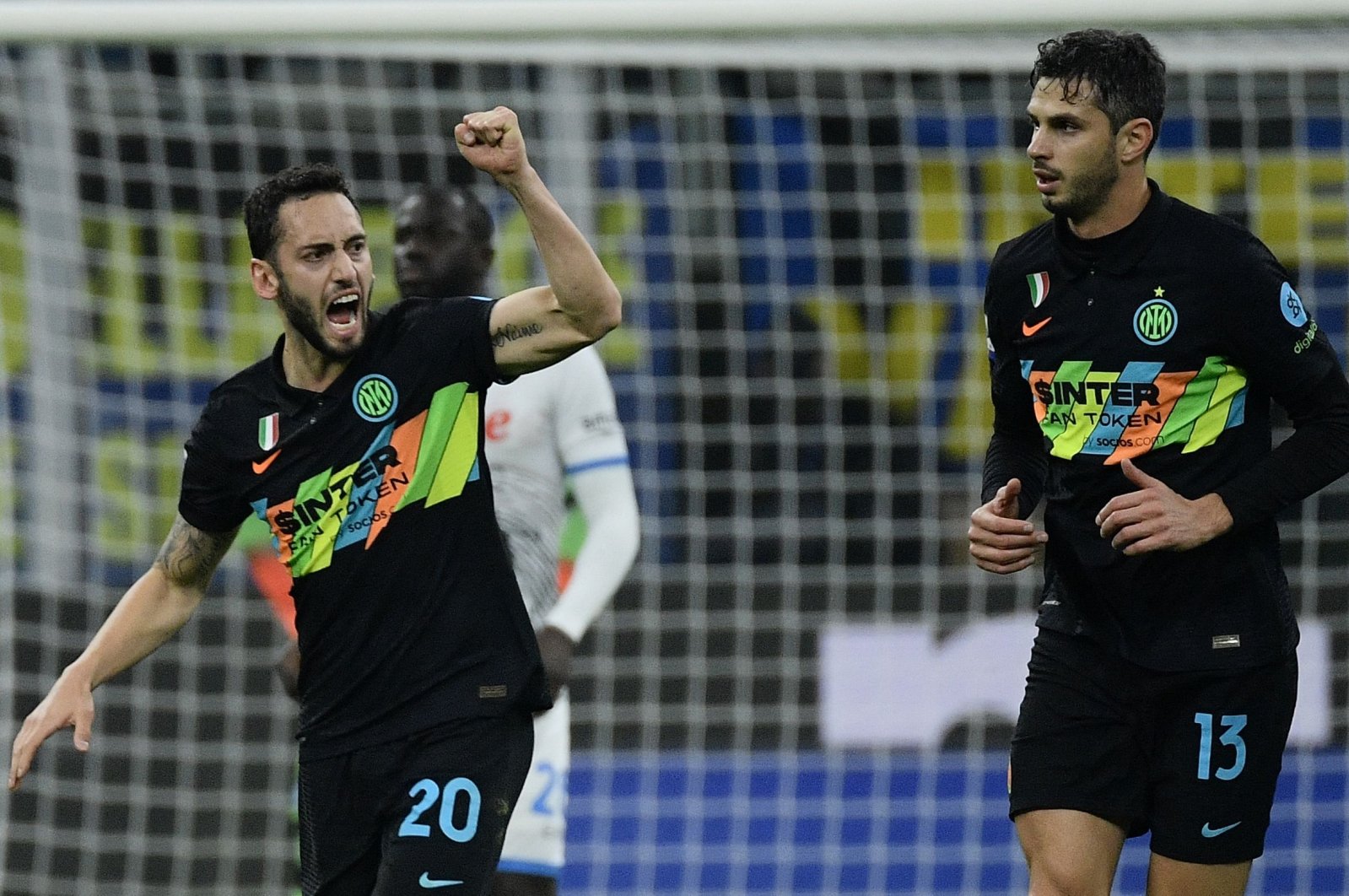 Inter Milan bolstered its Serie A title defense with an enthralling 3-2 win on Sunday that ended Serie A leader Napoli's undefeated run this season.

The win also moved Inter within four points of the top spot. Simone Inzaghi's side came back from Piotr Zielinski's powerful early strike to close the gap on both Napoli and AC Milan, who lost 4-3 at Fiorentina on Saturday, in a breathless encounter at the San Siro.

Hakan Çalhanoğlu leveled the scores from the penalty spot midway through the first half.

Ivan Perisic's header just before the break and Lautaro Martinez's smart finish after a heart-pounding upfield surge from Joaquin Correa made sure of the points and a three-way title race even more interesting.

"It was a very important game for us looking at the league table," said Martinez to DAZN.

"We have been playing well but every now and again the result isn't the right one for us, but today the team played with intensity and character."

Napoli, who also scored through Dries Mertens with 11 minutes left, lost its unbeaten league record just as Milan did in Florence after Samir Handanovic pulled off a miracle save to deny Mario Rui's header in stoppage time.

Mertens then wasted a gilt-edged chance to snatch an unlikely point with seconds remaining when he skied Andre-Frank Zambo Anguissa's perfect cross, completely unmarked and at point-blank range.

To make matters worse for Napoli, Luciano Spalletti also had to watch two of his players come off worse in clashes of heads.

Star striker Victor Osimhen had to leave the field 10 minutes after the break after he and Milan Skriniar thumped into each other, with Napoli revealing late on Sunday that the Nigeria attacker had suffered "multiple fractures" of his left cheekbone and eye socket.

Goalkeeper David Ospina also collapsed to the ground in a worrying fashion after his head whacked into Inter substitute Edin Dzeko's, but both players carried on with their heads bandaged.

"I said to my players at halftime that if we play with fear we won't make courageous choices," said Spalletti of his team's underwhelming first-half display.

Felix Afena-Gyan made sure that Andriy Shevchenko got off to a losing start in charge of Genoa with the teenage substitute scoring both goals in a 2-0 win for Roma on a soaking night on the Italian Riviera.

The 18-year-old Ghanaian slotted home the opener eight minutes from the end in the middle of a downpour at the Stadio Luigi Ferraris and then curled home a stunning long-range effort in stoppage time before charging over to celebrate with coach Jose Mourinho.

His goals, the first by a Serie A player born in 2003, move Roma to fifth, three points behind Atalanta in the final Champions League spot.

"I promised him that I'd buy him a pair of really expensive shoes that he likes," Mourinho told DAZN.

"They cost something like 800 euros, so he came over to remind me not to forget. I'll buy them first thing tomorrow morning."

Shevchenko has a job on his hands at Genoa, whose anemic display meant it stays in the relegation zone after being put there earlier in the day by local rival Sampdoria's 2-0 win at the bottom side Salernitana.

Earlier, David Okereke struck the only goal to earn Venezia a surprise 1-0 win at Bologna on Sunday, its second impressive victory in as many Serie A games.

Nigerian attacker Okereke, on loan at promoted Venezia from Belgian outfit Club Brugge, poked home the winner in the 61st minute to move Venezia up to 13th and six points from the relegation zone.

The 24-year-old's fourth league goal of the season gave Paolo Zanetti's side a second straight shock win after also beating Roma before the international break.