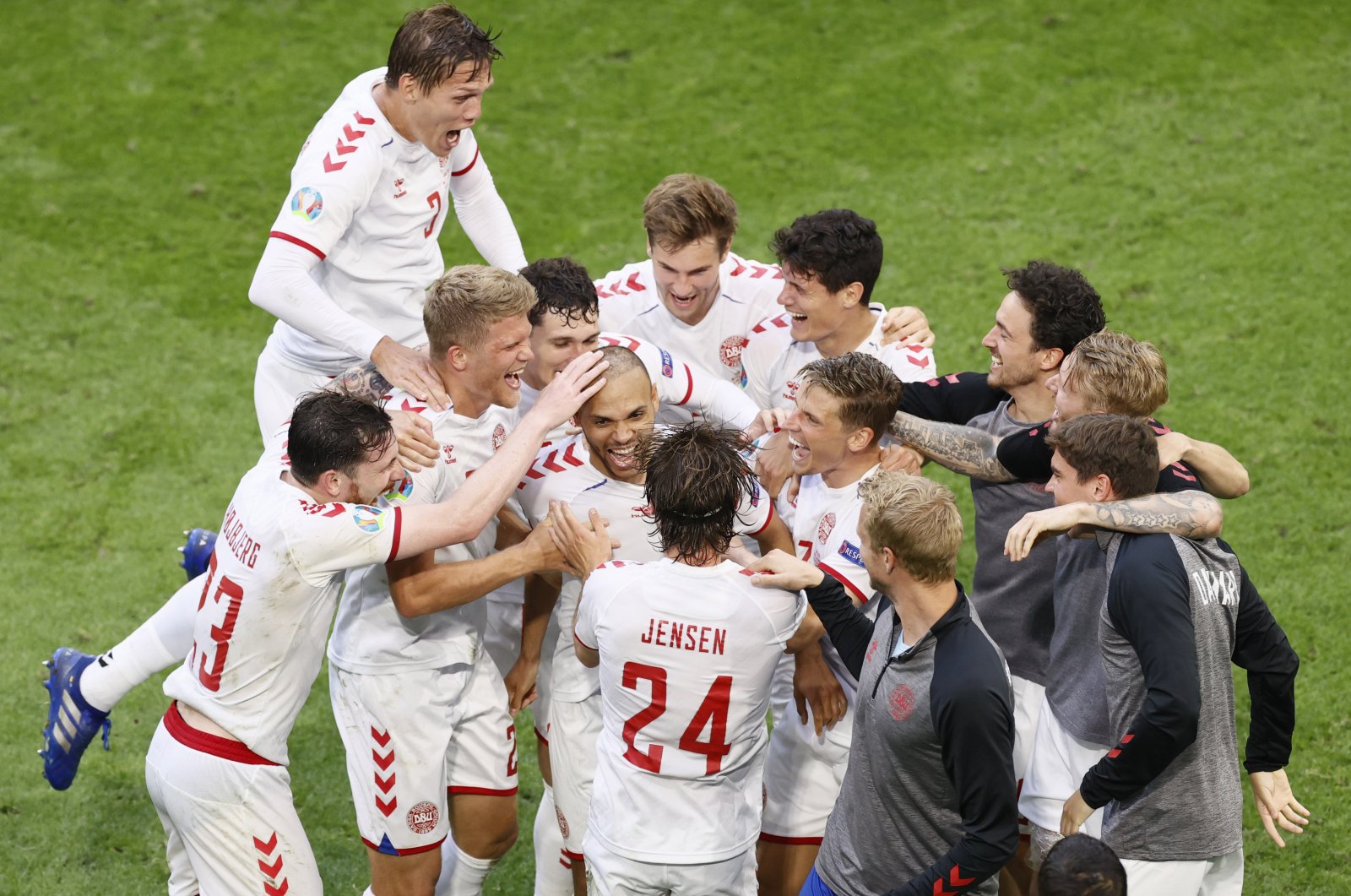 Denmark's Martin Braithwaite (C) celebrates with his teammates after his goal against Wales during the Euro 2020 match against Wales at Johan Cruyff Arena in Amsterdam, the Netherlands, June 26, 2021. (AP Photo)
by Associated Press Jun 26, 2021 8:59 pm
RECOMMENDED

Denmark advanced to the quarterfinals at Euro 2020 by beating Wales 4-0 on Saturday in Amsterdam, getting two goals from Kasper Dolberg exactly two weeks after Christian Eriksen collapsed on the field during the team’s opening match.

Both Eriksen and Dolberg played for Ajax, the team that plays its home matches at the Johan Cruyff Arena. Much of the crowd of 16,000 was cheering on the Danes.

“It feels like a home game,” Dolberg said. “This stadium, which is very special to me, it’s fantastic.”

Dolberg, who was given his first start of the tournament by Denmark coach Kasper Hjulmand, scored a goal in each half. Joakim Maehle scored the third in the 88th minute and Martin Braithwaite added the fourth in injury time.

It was the second match in a row that Denmark scored four times, after beating Russia 4-1 to qualify for the round of 16 after losing its first two matches. Denmark is the first nation to score four or more goals in consecutive matches in the history of the European Championship.

“We needed the love and support and that’s what gave us wings,” Hjulmand said of the crowd in Amsterdam.

After soaking up early pressure by Wales, Dolberg struck.

He took a pass from Mikkel Damsgaard in the 27th minute and cut infield from the left before curling a right-foot shot into the far corner. He doubled the lead in the 48th minute when he scored with a low shot after Neco Williams' attempted clearance went straight to him.

Dolberg knows all about scoring in Amsterdam. He found the net 45 times in 119 matches for Ajax from 2016-19 before signing for French club Nice.

“I think we have a star striker in Kasper,” Hjulmand said.

Saturday’s strikes brought his tally at the Johan Cruyff Arena to 31, with the other 29 coming for Ajax.

“Today when we were walking ... to the stadium I felt that it was something very, very special for me," Dolberg said. "Today everything feels right.”

Dolberg became the first Danish player to score at least twice in a match at a major tournament since Nicklas Bendtner against Portugal at Euro 2012.

With Wales increasingly ragged, Maehle made it 3-0 with a powerful shot when he had time and space to control the ball and beat Wales goalkeeper Danny Ward. Braithwaite's goal was initially ruled offside but allowed after a video review.

Harry Wilson was sent off in the 90th minute for a foul on Maehle as Wales slumped to its worst loss in a competitive match since being beaten 6-1 by Serbia in September 2012.

“We’re all hurting. We didn’t want our supporters to watch us going out like that,” Wales coach Rob Page said, adding he believed there was a foul on Kieffer Moore in the build-up to the second Denmark goal.

The Danes will next play either the Netherlands or the Czech Republic in the quarterfinals in Baku on Saturday.

Wales had an early chance to take the lead when captain Gareth Bale sent a swerving shot just wide in the 10th minute. He shot wide again two minutes later as he attempted to break an international goal drought that has now reached 15 matches.

Wales managed only one shot on target in the entire match. Denmark had eight.

“We showed real heart,” said Bale, one of Wales’ key players when the team reached the semifinals at Euro 2016 in France.