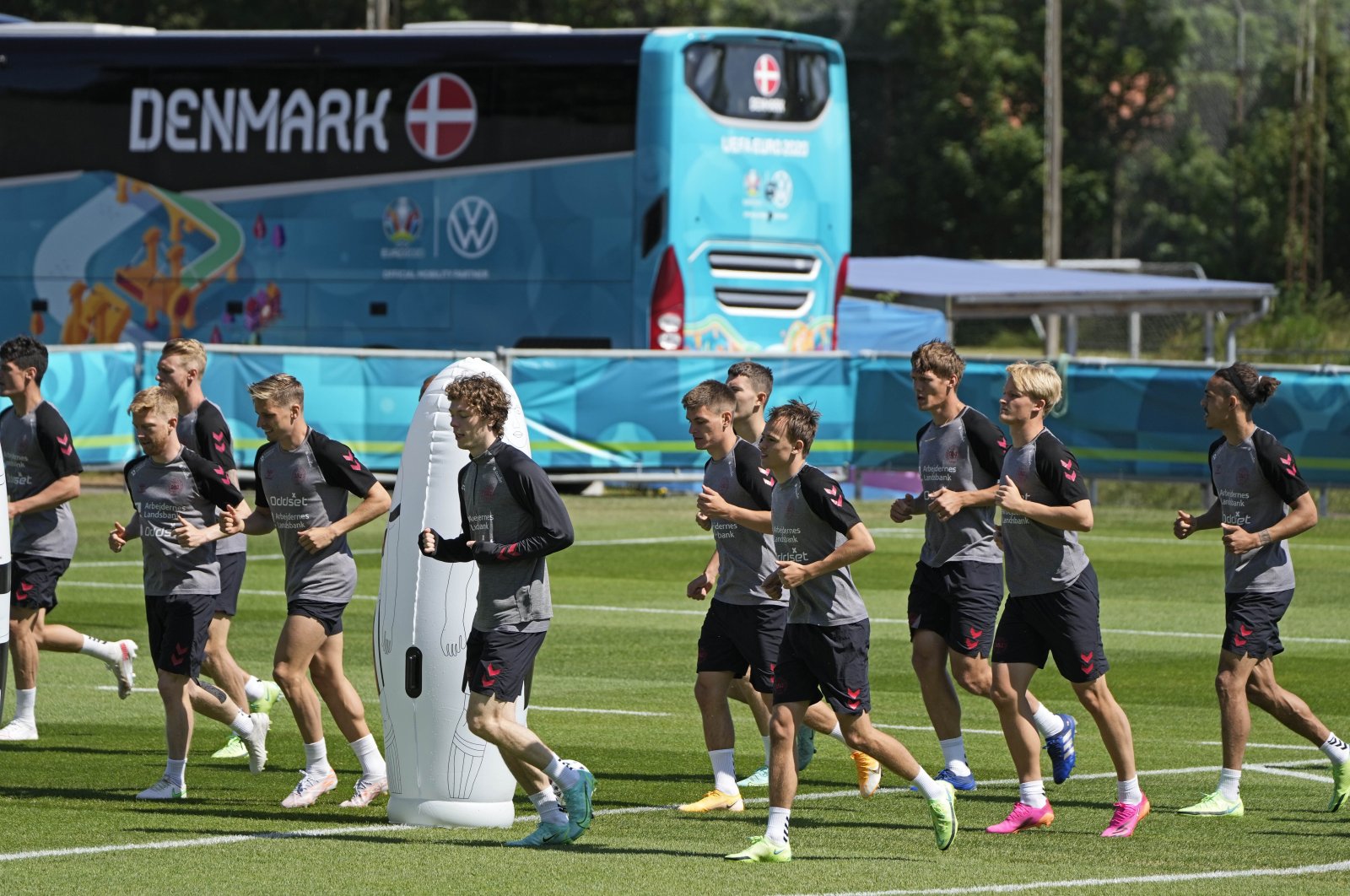 An emotional Danish side will take comfort in the fact that Christian Eriksen is recovering and will be cheering them on along with the rest of the country as it faces Euro 2020 favorites Belgium in Copenhagen Thursday.

Kasper Hjulmand's talented side knows that its qualification from Group B will be in jeopardy if it gets the same treatment that leaders Belgium dished out to Russia on Saturday, and they need to bounce back from their traumatic 1-0 defeat by Finland.

Eriksen told the world on Tuesday that he was "fine – under the circumstances" following his mid-match collapse and said he will be right behind the teammates who rallied to his side as medics rushed to save his life.

Those players were still dazed when, after what UEFA called a "crisis meeting," they returned to the field some two-and-a-half hours after kick-off to finish a match which had long since been overshadowed by Eriksen's plight.

That loss came after what Kasper Schmeichel described on Monday as "a position, that I personally feel that we shouldn't have been put in" as Denmark was offered the choice to complete the game that evening or Sunday afternoon.

However, on Tuesday coach Hjulmand said Eriksen was in daily contact with the rest of the team and was trying to gee up his friends before they face the world's top-ranked team.

Hjulmand said that "no-one can replace Christian" but will be looking to harness the emotions of the home crowd at the Parken Stadium, where Denmark will have the backing of some 25,000 fans after the Scandinavian nation relaxed coronavirus restrictions.

Denmark will need all the support they can get against Eriksen's Inter Milan teammate Romelu Lukaku, whose ominous double in Belgium's 3-0 win over the Russians showed why at the age of just 28 he is by some distance Belgium's all-time record scorer with 62 goals.

Belgium top Group B on goal difference ahead of Finland and can seal their passage to the knockout stage with a game to spare at the Parken.

Roberto Martinez's side was hugely impressive in their opening match and has been further boosted by the news that Borussia Dortmund midfielder Alex Witsel is available again after recovering from an Achilles tendon injury which had kept him out of action since January.

Witsel only began running again around a month ago but Belgium's physiotherapist Lieven Maesschalk, who guided the player's recovery, said "he isn't scared" about his return.

"He is ready to play even if the risk of a relapse isn't zero," said Maesschalk Tuesday.

In the meantime, Austria and the Netherlands both broke through barriers in getting their European Championship campaigns off to winning starts and will be looking for more of the same when they meet in Amsterdam.

Austria’s 3-1 victory over North Macedonia in Bucharest on Sunday was its first-ever at the European Championship while the Dutch marked its return to a major tournament for the first time in seven years with a dramatic 3-2 win over Ukraine.

Another home game at the Johan Cruyff Arena gives the Netherlands an advantage although it will need to tighten up in defense to avoid a repeat of Sunday’s Group C game in which they let slip a two-goal lead before being rescued by Denzel Dumfries’s 85th-minute winner.

Austria, on the other hand, will be looking to build on its maiden success but aware the Dutch will be a much tougher proposition than rookies North Macedonia.

It is likely to make changes in attack, even though the three goals in Bucharest were more than in all its previous six European Championship appearances.

Marko Arnautovic and Michael Gregoritsch should start after coming off the bench to seal Sunday’s win.

The Dutch are not likely to make any changes as they stick with a 5-3-2 formation which had been the subject of much debate in the country before the Ukraine match.

The strong performances of wing backs Dumfries and Patrick van Aanholt against Ukraine, however, may have quelled the dissent.

Ukraine needs to shrug off the disappointment of conceding a stoppage-time goal in its 3-2 defeat by the Netherlands in Euro 2020 and shift the focus to the crunch game against North Macedonia, head coach Andriy Shevchenko said.

Although Shevchenko was pleased with his team's fightback against the Dutch, he conceded the game's relentless pace took its toll on the players.

"Many of the lads were empty vessels after the match with the Netherlands, we will see how many of them will be able to recuperate sufficiently for the game against North Macedonia," Shevchenko told Ukrainian media.

"We knew even before the tournament this would be the pivotal game of the group stage."

Shevchenko stressed Ukraine would try to take a leaf out of Austria's book after its opening 3-1 win over the North Macedonians, who are playing their first major tournament as an independent nation.

"We will watch the tape and screen all the things the Austrians did right," Shevchenko said. "We still have two games left and we need to cling on to every chance."

North Macedonia wing back Ezgjan Alioski said the Balkan nation must learn from their mistakes after conceding two goals in the last 20 minutes against the Austrians.

"The match against Ukraine is like a cup final because it's a must-win situation for both teams but no matter what, we need to keep enjoying the tournament and have fun," Alioski told a news conference on Tuesday.

"We have to recover quickly from the defeat by Austria though and we don't have much time. It is essential that we believe that we can win although Ukraine is the favorite.

"They are a great attacking side full of top quality individuals and it will take a tactically sound defensive effort to thwart them," he said.