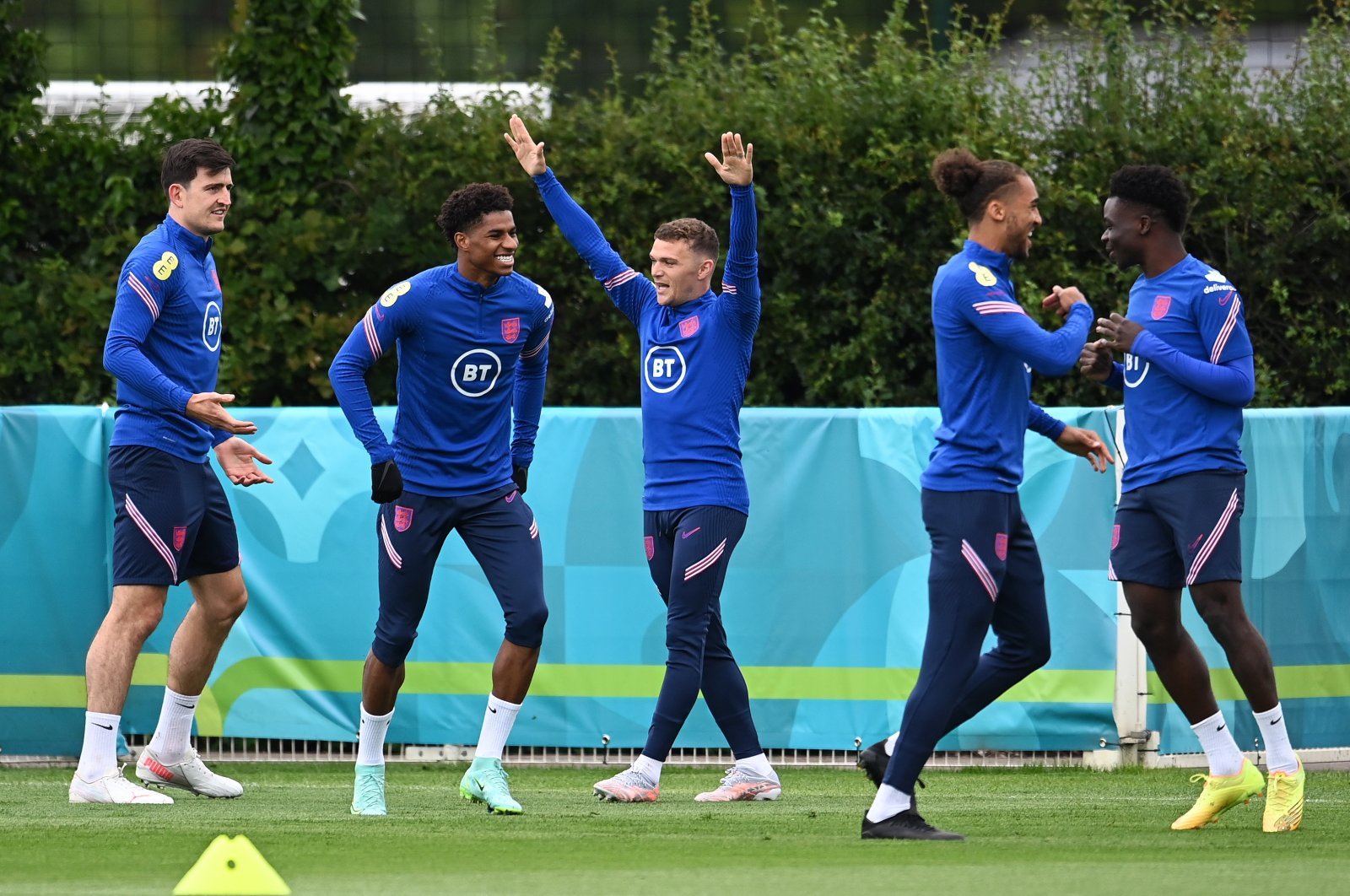 Despite calls for a more positive style after a goalless draw against Scotland, England is unlikely to bring any major changes as it prepares for Tuesday's final Euro 2020 Group D match against the Czech Republic at Wembley.

Manager Gareth Southgate may change some personnel, but it is not expected he will switch to the kind of attacking lineup some of his critics have been demanding.

The Czechs are top of the table on four points, ahead of England on goal difference, and a draw would see both teams advance regardless of the outcome of the game between Croatia and Scotland, who are both on one point.

So while critics may be demanding Southgate switch to a more offensive lineup, he will know the priority is to make it safely into the last 16.

On Sunday, Southgate took the unusual step of announcing that captain Harry Kane, whose sluggish displays have worried England fans, will definitely start against the Czechs.

Since the Scotland game, he has also pushed back gently against those who have been calling for Borussia Dortmund winger Jadon Sancho, who has yet to feature, to be given a slot on the right wing.

"We've got some explosive options and a lot of them are young players and experiencing a big tournament for the first time," he said.

"So as a coaching staff we are realistic about our expectations of them as individuals.

"Jadon is in that mix. He's trained well the last few days and of course, we have got those options and those decisions to make," he said.

Sancho, linked with a move to Manchester United after a strong season in the Bundesliga, would be an alternative to Raheem Sterling, who scored the goal in the opening 1-0 win over Croatia, but who he has been struggling for form over recent months.

The most popular change Southgate could make is to bring creative midfielder Jack Grealish into the side, but even if he does introduce the Aston Villa player it is unlikely to be part of a major tactical shift.

"We expect to face the extremely strong England we know from recent years. Their team is well-balanced with experienced players from top-class clubs, talented youngsters. We are not reading much into the performance against Scotland: it was a derby with its own specific characteristics," he said.

Czech striker Patrik Schick is the joint top scorer, with Cristiano Ronaldo, in the tournament having grabbed three goals so far in the opening two games – including his wonderful long-range strike against Scotland.

Nowhere to hide against Scotland

Croatia's crunch Euro 2020 game against Scotland at Hampden Park on Tuesday will show whether the 2018 World Cup runners-up still have the mettle for success on the big stage, striker Bruno Petkovic said.

After poor performances in a 1-0 defeat by England and 1-1 draw with the Czechs, Croatia must beat the Scots to keep alive hopes of advancing into the last 16 from Group D.

"The Scotland game will give all the answers," the towering 26-year old striker told a news conference in Croatia's coastal base camp of Rovinj on Sunday.

"We've been below par so far as shown by our performances and the points tally. We know that in the end we will only be judged by the results and the clash with Scotland is the perfect chance to show that we still have what it takes.

"The Scots are a compact side difficult to break down and that was clear to see from their 0-0 draw with England at Wembley. But we have to try to take advantage of their shortcomings."

Manager Zlatko Dalic's strategy of deploying winger Ante Rebic as a "false nine" at Petkovic's expense backfired in both games, with Croatia looking more comfortable and threatening after he came on as a substitute.

"I am not happy and I don't feel comfortable ahead of the last group match," he told Croatian media after his side came from behind to salvage a draw against the Czechs.

"This is not the Croatia I wanted or planned for but we have one more chance to make it right. The displays have not been encouraging and we can take very few positives from the opening two games because the results dictate the atmosphere."

The Scots, in contrast, are in good spirits after a gritty performance against England at Wembley but know that they too need a win to stay in the hunt for a last 16 berth as they were beaten by the Czechs 2-0 in their opening game.

Their center back Grant Hanley pointed out a superb defensive display against England will only be rewarded if they can deliver at the other end against Croatia.

"Of course, we want to finish the job now and not waste what we did on Friday night," he said.

"We are really looking forward to it and we will have to be physically and mentally ready if we want to progress from the group."