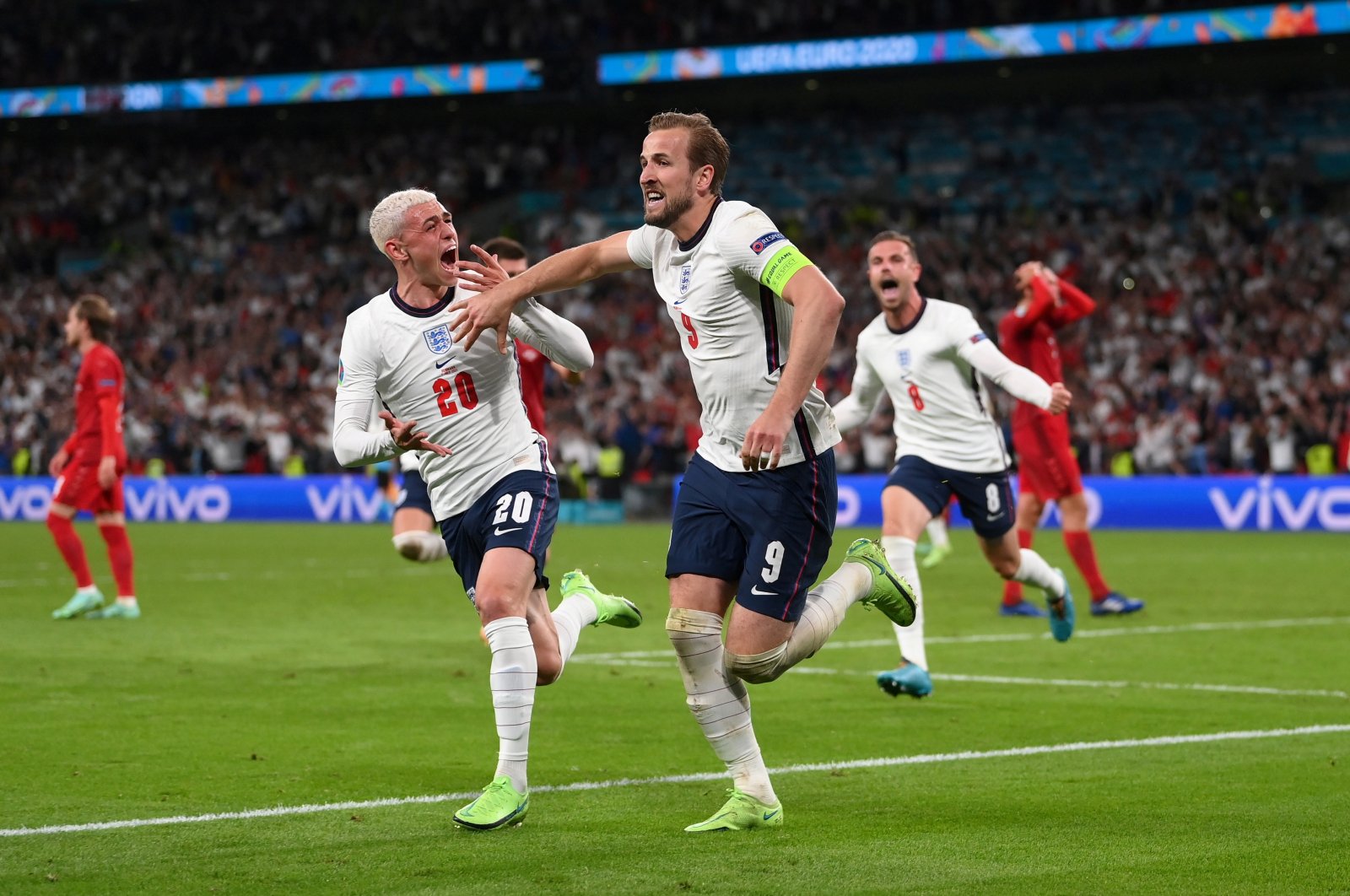 England capitalized on the home advantage provided by an almost full house at Wembley to beat Denmark 2-1 in extra time in the Euro 2020 semifinals Wednesday.

The Three Lions are now just 90 minutes away from ending their 55-year trophy drought.

Gareth Southgate's men will face Italy on Sunday – again on home turf and roared on by a nation at fever pitch – infused with the belief they can make history by winning the Euros for the first time and lift a second major trophy after its 1966 World Cup triumph.

"Probably the best feeling in the world" screamed The Sun's front page when it hit the newsstands Thursday, with a picture of a jubilant England captain Harry Kane celebrating his extra-time winner.

Footage of England fans erupting in celebration around the country filled social media and the victory dominated British television news.

But for the crestfallen 1992 champions Denmark, defeat spelled the end of a fairytale run to the last four after the trauma of witnessing star Christian Eriksen collapse in its opening group game against Finland with a cardiac arrest.

A Wembley crowd of almost 65,000 whipped themselves into a frenzy before kickoff with rousing renditions of "Sweet Caroline" and "Football's Coming Home," only to fall flat when Mikkel Damsgaard smashed home a 30th-minute free-kick past the despairing dive of Jordan Pickford.

It was the first goal England had conceded in the tournament and the first scored directly from a free-kick.

Just nine minutes later, with the thousands of British-based Danes inside Wembley still celebrating, England pulled level when Denmark captain Simon Kjaer bundled the ball into his own net under pressure from the lurking Raheem Sterling.

Neither side could find a goal in the second half, but the volume reached a crescendo in extra-time when Sterling, who was brought up a stone's throw away from Wembley, fell under Joakim Maehle's challenge and referee Danny Makkelie pointed to the spot.

Kane, normally deadly from 12 yards, saw his nervous, weak effort saved by the outstanding Kasper Schmeichel, but the Premier League top scorer was quickest to the rebound and slammed home.

It gave England an advantage they would keep until the final whistle, which sparked scenes of delirium in the stands and on the pitch as the Three Lions players partied.

"When you've waited as long as we have to get through a semi-final, the players – considering the limited international experience some of them have – have done an incredible job," Southgate told ITV.

"The most pleasing thing is we've given the fans and nation a fantastic night and the journey carries on for another four days.

"We suffered in Moscow (2018 World Cup semifinal) on a night like this and we've managed to put that right."

The match was attended by British Prime Minister Boris Johnson and Prince William, who is president of the English Football Association.

"Tonight @England played their hearts out," tweeted Johnson. "What a fantastic performance from Gareth Southgate's squad. Now to the final. Let's bring it home."

England has suffered semifinal heartbreak at major tournaments four times since 1966 and those agonizing defeats have been etched in the psyche of English football.

But Southgate has overseen the emergence of a vibrant young team unconcerned by the failings of its predecessors and England has reached its first European Championship final after losing in the semi-finals in 1968 to Yugoslavia and 1996 to Germany.

The spirit of the side – little ego, and all playing for each other – was best exemplified by Jack Grealish, who could have been bitter at being substituted in extra-time only having only come off the bench in the 69th minute.

"I love this team!! What a night at Wembley!" tweeted the Aston Villa midfielder.

"Final Bound ... Come on England!!!" posted Sterling with a #BoyFromBrent hashtag referencing his roots growing up in the London borough of Brent, where Wembley stadium is situated.

Kasper Hjulmand's Denmark team had been fueled by desire after Eriksen had to be resuscitated on the pitch, embarking on a three-match winning run that took them to a first semifinal in 29 years.

"One thing is to lose a game, but losing this way is a disappointment because these guys have fought a lot," Hjulmand said.

"We have to digest this before we can describe these feelings. It's a bitter way to leave the tournament."

Italy, who failed to qualify for the 2018 World Cup, lie in wait for England at Wembley this weekend after beating Spain 4-2 on penalties at the same stadium following a gripping 1-1 draw on Tuesday.