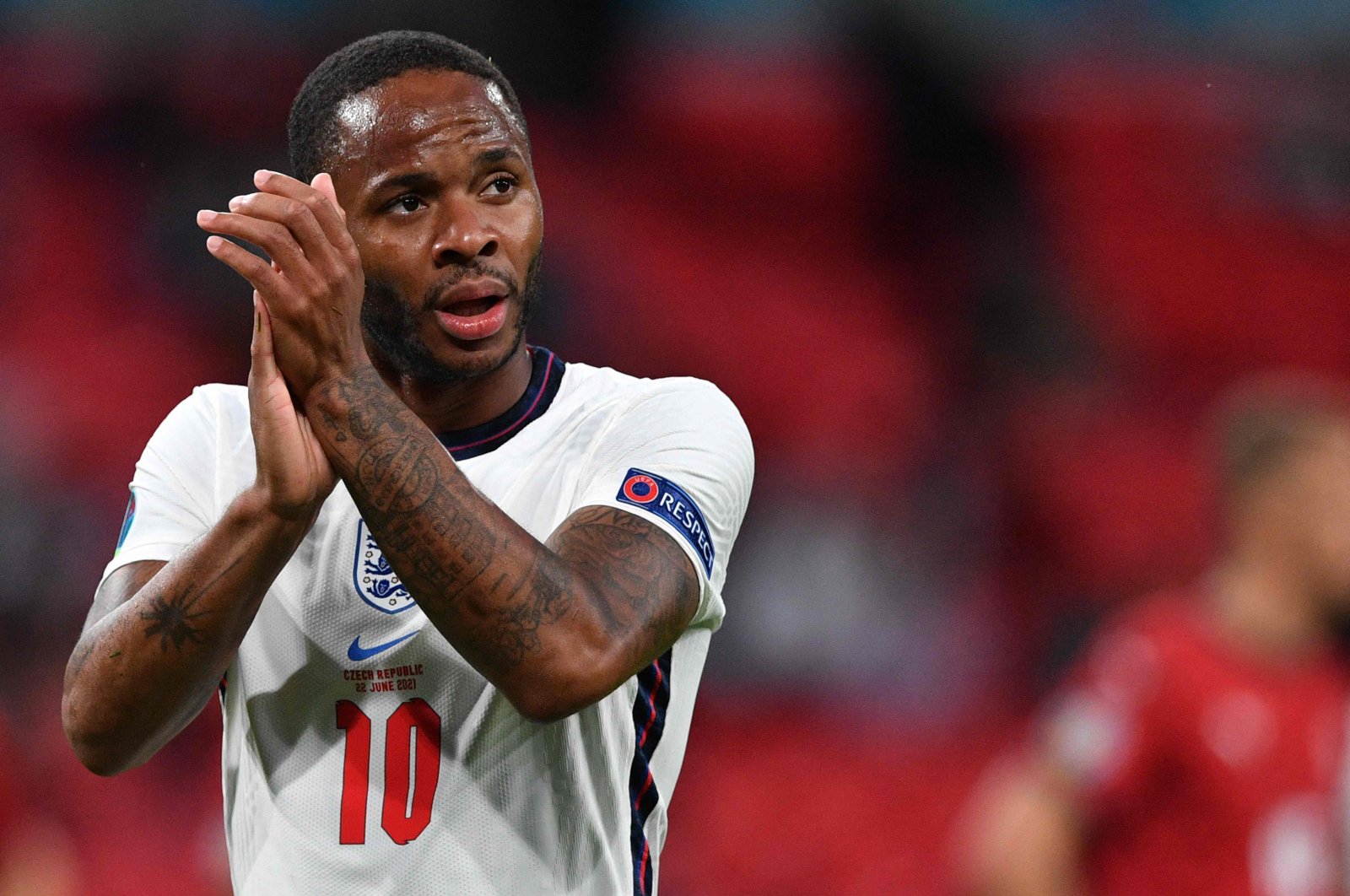 England's forward Raheem Sterling applauds as he comes off during the UEFA EURO 2020 Group D football match between Czech Republic and England at Wembley Stadium in London on June 22, 2021. (AFP Photo)
by REUTERS Jun 22, 2021 11:55 pm
RECOMMENDED

The Brits advance to Euro 2020's last 16 as the group winners while the Czechs were also through as one of the best third-placed teams.

Sterling scored his and England's second goal of the tournament in the 12th minute but the initial injection of pace, intensity and crowd-pleasing excitement brought by Jack Grealish and teenage man of the match Bukayo Saka gradually dissipated as the game petered out into an utterly forgettable second half.

Neither side will mind though as they now begin to plot their assaults on the knockout phase.

England returns to Wembley on Tuesday to face the runners-up from Group E – likely to be France, Germany, or Portugal – while the Czechs must wait to find out which group winner they play.

They were dislodged from second place by Croatia, who beat Scotland 3-1 and will play the Group E runners-up – Sweden, Slovakia, Spain, or Poland – in Copenhagen Monday.

On the positive side of England's balance sheet is two wins and a draw, three clean sheets, a return to Wembley and a good number of players getting a taste of the action.

Conversely, it has scored only two goals – the lowest by any team ever to top a Euros group – was sluggish and over-cautious for long periods of all three games and the midfield combination and approach seemingly remain anything but settled. It also face a potentially daunting last 16 game next. "We are not fluent but we have moments where we look a good side," said England coach Gareth Southgate.

"The Czechs are a really good side. They use the ball well and are really tough to break down. There is more to come from us, definitely. We have not scored from a set play yet. They are crucial in big matches and we have to get those nailed.

"All of our next opponents will be different games but there are a lot of good things we are doing."

Sterling was at the sharp end of England's early attacks as they began full of energy. He struck a post in the second minute when he lifted the ball past advancing keeper Tomas Vaclik – the third time England had hit a post of the same goal early in each match.

Ten minutes later Sterling found the target with a close-range header from a delicious floated cross by Grealish after a driving run by Saka had splintered the Czech rearguard.

Making his first appearance of the tournament, the 19-year-old wide man showed a willingness to run with the ball that was painfully absent from England’s first two performances and with Grealish a constant menace, the hosts looked more threatening.

Harry Kane looked sharper too and had a shot well saved late in the first half by Vaclik, but that early promise was gradually replaced by the all-too-familiar caution and England barely mustered another meaningful attempt.

The Czechs were neat and tidy without carrying a huge amount of penalty box threat, though Tomas Holes had a shot palmed clear by Jordan Pickford and Tomas Soucek fired just wide in the first half.

Substitute Jordan Henderson thought he had scored his first goal for England on his 60th appearance five minutes from time after a scramble, only to see it ruled out for offside.

Overall though it was desperately thin gruel for most of the second half, with the loudest cheers reserved for the big screen announcements of Croatia's goals that eliminated Scotland.