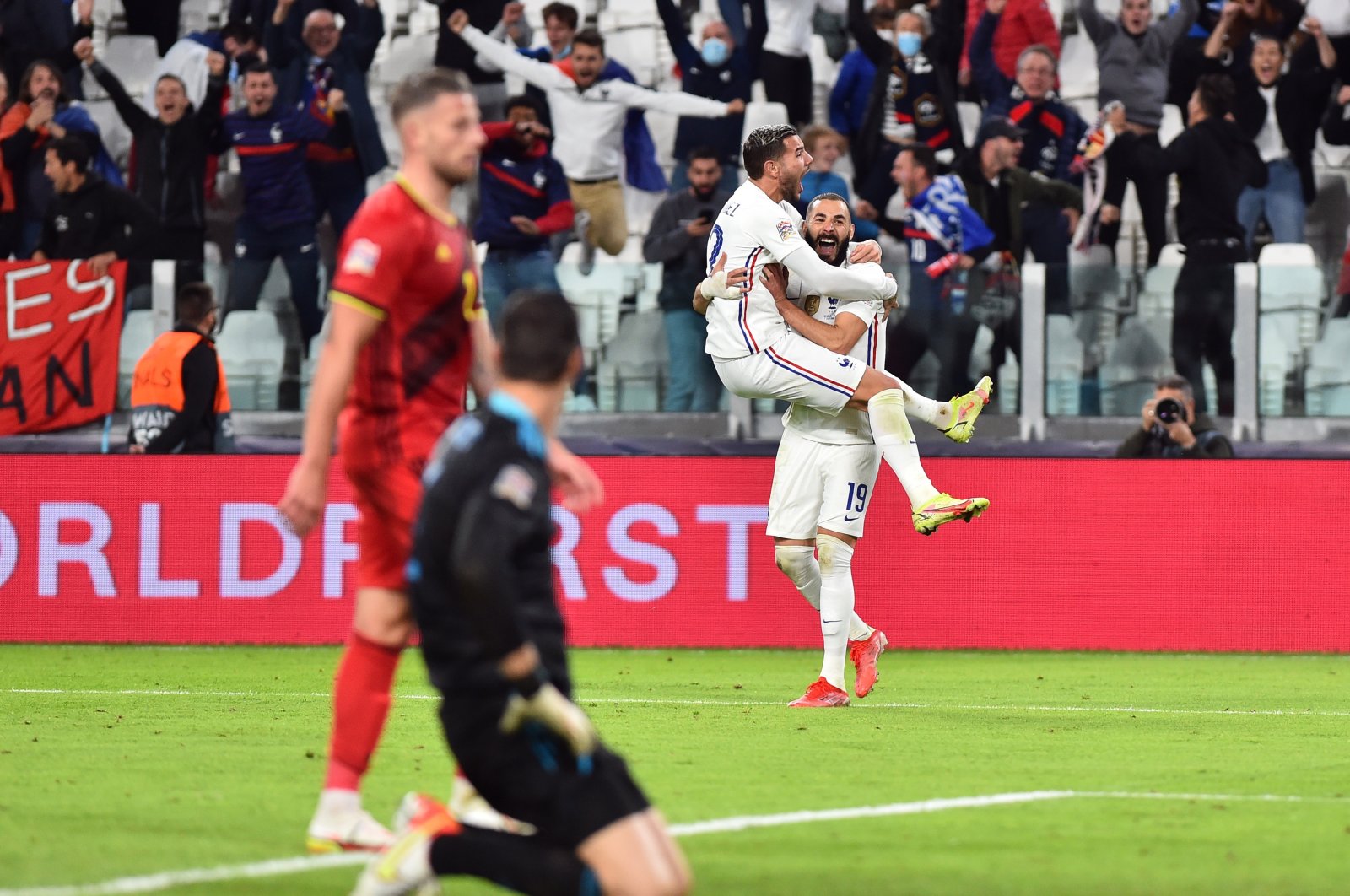 World champion France is set to face Spain in the Nations League final after Les Bleus came from two goals down to beat Belgium 3-2 Thursday.

Theo Hernandez scored the last-minute winner to complete the comeback and push France through to Sunday’s final against Spain. It was only his second appearance for his country and came the day after his 24th birthday.

Two quickfire goals at the end of the first half had given Belgium a seemingly comfortable lead but Kylian Mbappe, who became the youngest player to reach 50 caps for Les Bleus, set up Karim Benzema's goal in the 62nd minute and converted a penalty seven minutes later.

“To be capable of doing what we did, and you shouldn’t forget the team we did it to, the top-ranked team in the world at the moment, it’s fantastic what the team of France managed to do,” coach Didier Deschamps said. “I don’t think there were many people who thought we could at halftime. All credit to the players. The pride and character that they showed, added to the quality, ensured we did it.”

The 22-year-old Mbappe was made somewhat of a scapegoat for France’s failure at the European Championship after missing the decisive penalty in the shootout in France’s loss to Switzerland in the round of 16.

“I never doubted Kylian. I always showed him that I was with him, behind him,” Deschamps said. “I know very well that the France team is stronger with him.”

For Belgium, it was another disappointing failure for a team that has entered the past few major tournaments as one of the big favorites but hasn't reached a big final since Euro 1980.

Even the official Twitter account of the Belgian national team seemed confident of victory at halftime, tweeting “Well, that’s a comfortable lead!” – before gently mocking itself after the final whistle.

“You need to look at the first half we did, it was full of cool heads, real understanding of what was needed, creating chances, our performance was at the level we expect,” Belgium coach Roberto Martinez said. "Second half we became emotional, we were thinking of getting to the final as quickly as we could rather than playing our game.”

Theo Hernandez and his brother Lucas Hernandez were named in the starting lineup for France, in midfield and defense. It was the first time two brothers had played together for Les Bleus since Herve and Patrick Revelli in 1974.

Spain beat Italy in the other semifinal on Wednesday.

Belgium was looking to avenge its semifinal defeat to France at the 2018 World Cup and it almost got off the perfect start as Jules Kounde’s woeful clearance from Romelu Lukaku's cross fell straight to Kevin De Bruyne, who was in a great position in the middle of the penalty area. But his shot was palmed around the post by France goalkeeper Hugo Lloris.

Belgium took control shortly before halftime. Yannick Carrasco broke the deadlock in the 37th minute when he cut inside from the left, turned a defender and drilled into the near bottom corner.

De Bruyne provided the assist for that goal, spotting Carrasco’s run, and he did the same four minutes later as he threaded a through-ball to Lukaku, who collected with his back to goal before turning, racing clear of Lucas Hernandez and firing into the roof of the net.

France upped the pressure at the start of the second half and nearly pulled a goal back in the 58th minute when Mbappe cut in from the right and rolled the ball across to Antoine Griezmann, who fired just wide of the post.

France did reduce the deficit four minutes later as Mbappe again danced his way past defenders before finding Benzema, who managed to squeeze in a swiveling shot despite being surrounded by red shirts.

And Deschamps’ side was level shortly afterward when Mbappe drove a penalty kick into the top right corner after Youri Tielemans was adjudged – with the help of video review – to have fouled Griezmann.

Lukaku thought he had scored a late winner but it was ruled out for offside. Instead it was France that snatched victory as Theo Hernandez curled into the far side of the net following a good team move.

Paul Pogba had sent a free kick off the crossbar moments earlier for Les Bleus.

Those three incidents came in quick succession in a frenzied finale.

“That’s the football we love,” Deschamps said. “If you’re on the good side of the craziness that’s great, we were on the bad side this summer.”