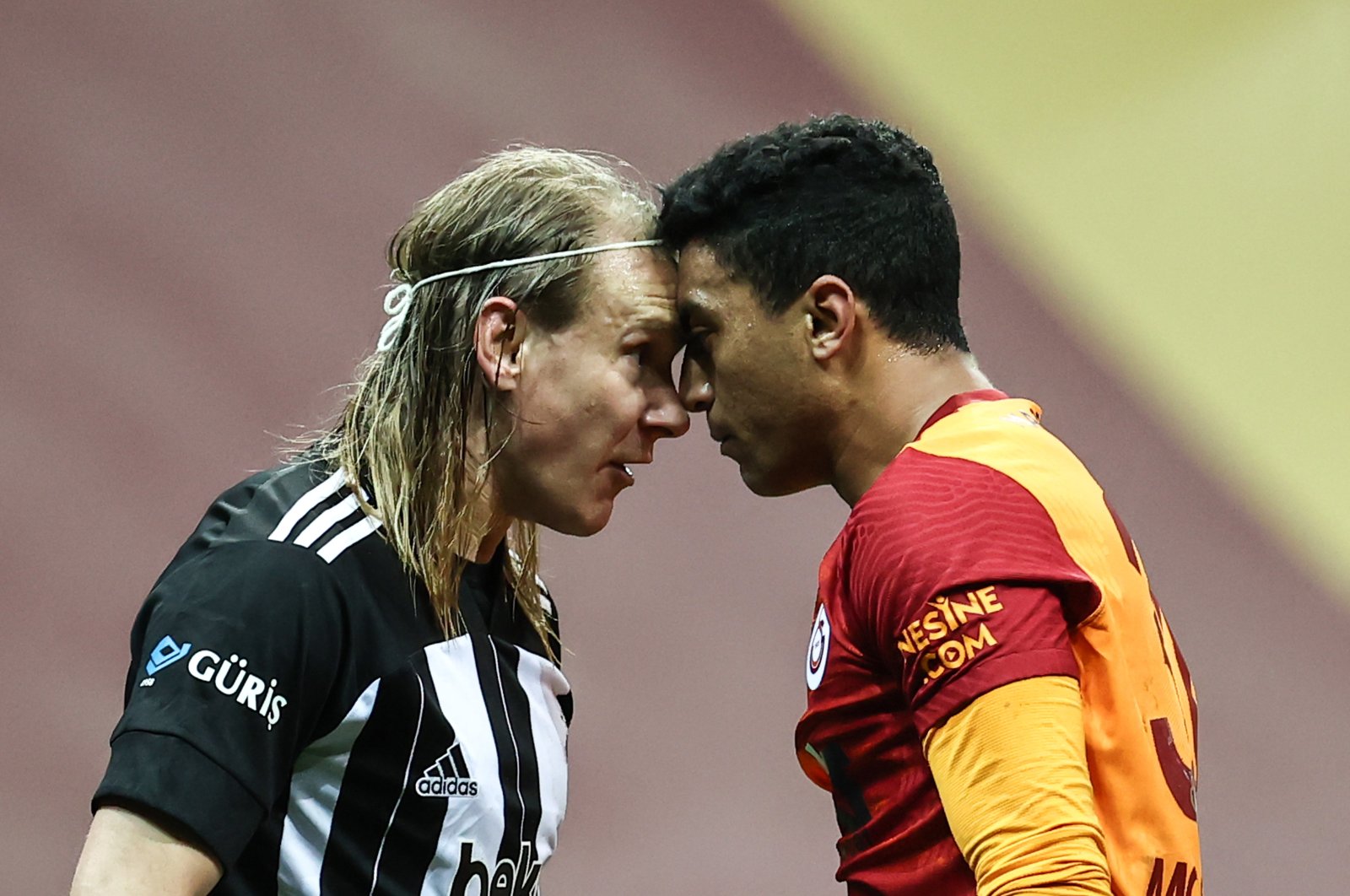 Beşiktaş's Domagoj Vida (L) and Galatasaray's Mostafa Mohamed try to stare each other down during a Süper Lig match at the Türk Telekom Arena, in Istanbul, Turkey, May 8, 2021. (AA Photo)
by Can Kazancıoğlu Oct 22, 2021 3:36 pm
RECOMMENDED

Two of Turkish Süper Lig’s top teams prepare to face each other as Galatasaray hosts defending champion Beşiktaş in Istanbul derby on Monday.

Monday night’s clash could be a prime opportunity for both sides to make a beeline for the upper parts of the table, if they can manage to best each other.

The previous leader Fenerbahçe was knocked out of its perch last week after Trabzonspor handed the Yellow Canaries a 3-1 humbling defeat. Only four points now separate the top seven teams of the league.

Beşiktaş sits at fourth place with 17 points, just two shy of Fenerbahçe, while Galatasaray is sixth with the same amount of points due to goal difference. A potential win for either the Lions or the Black Eagles can slingshot them all the way to second place.

But it will be easier said than done, especially for Galatasaray, as it has been more than six years since the last time the Lions defeated Beşiktaş at an away game. To make things worse, Beşiktaş is yet to lose a home match to its city rivals since moving to Vodafone Park in 2016.

Galatasaray, however, might be primed to break the streak. Making a faltering start to the season, Fatih Terim’s side has managed to turn things around these days. Enjoying a three-match winning streak at Süper Lig, Galatasaray put the cherry on top with a 1-0 win at Lokomotiv Moscow in the Europa League.

Beşiktaş, on the other hand, is on a reverse path. Coach Sergen Yalçın’s men might have lifted the trophy back in May but their current form leaves much to be desired. The Black Eagles made a running start to the season with four wins in five matches, but since then, they have run out of steam and have dropped eight points in the last four games.

Aggravating the issue is the fact that Yalçın’s men are turned into the punching bag of Champions League Group C as they sit at the bottom with three losses and a minus-6 goal difference. Beşiktaş's latest suffering in the Champions League was by the hands of Sporting Lisbon with a 4-1 hammering at home.

Earlier on Sunday, Fenerbahçe will host Alanyaspor on the Asian side of the city in a bid to retake the reins of Süper Lig. Fenerbahçe sits third with 19 points and defeating its visitor could make coach Vitor Pereira’s men leaders once again.

Leader Trabzonspor, meanwhile, will visit Izmir club Göztepe on Saturday in a bid to cement its position at the top.