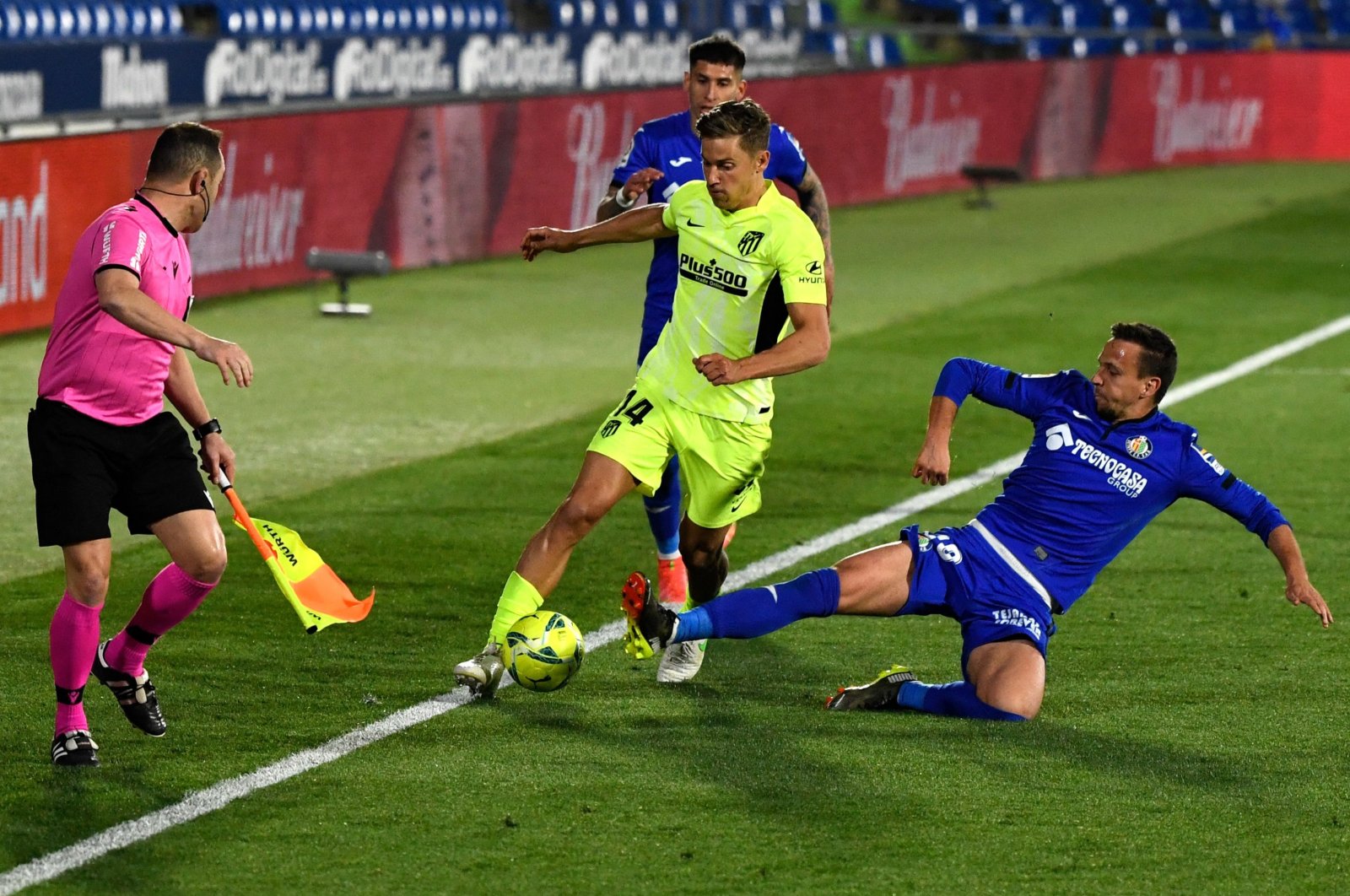 Atletico Madrid slipped up again in La Liga on Saturday as it failed to break down 10-man Getafe in a goalless draw that gives further encouragement to Barcelona and Real Madrid in the title race.

Real Madrid had earlier come from behind to beat Elche 2-1 thanks to a late double from Karim Benzema, with Atletico's stalemate meaning the gap is down to six points between the city rivals.

Barcelona, meanwhile, can move to within four points of the leaders by beating bottom club Huesca on Monday night.

Getafe was reduced to 10 men when Allan Nyom was sent off in the 70th minute before Luis Suarez hit the post and Moussa Dembele twice went close during a period of sustained Atletico pressure.

But it failed to find the finishing touch, meaning Diego Simeone's side has now won only two of its last seven games in all competitions, with a trip to Chelsea up next on Wednesday in the Champions League.

Atletico will be attempting to overturn a 1-0 deficit at Stamford Bridge.

"We did everything we could but the ball wouldn't go in. We have to take a point," said goalkeeper Jan Oblak.

"It was the game I expected," said Simeone. "A point is still a step forwards."

Nyom was sent off for a high tackle on Renan Lodi, with referee Jose Sanchez needing only one look at the replay to decide a yellow card needed to be upgraded to a red.

Joao Felix had already had a goal ruled out and with 20 minutes left and a man extra, Atletico poured forward.

Dembele shot from close range but was denied by David Soria while Lodi made a mess of finishing Suarez's cross to the back post.

Suarez then went closest, a curling effort with his left foot beating everyone only to pop back off the post. Dembele should have scored late on but headed wide.

Benzema's late equalizer salvaged a draw against Atletico last weekend and the Frenchman came up trumps again for Real Madrid, a brilliant shot flying in off the post in the 91st minute to secure victory at Valdebebas.

"It was a beautiful goal and it won us three points, so I'm happier than ever," he said.

Sergio Ramos returned from a knee injury to make his first appearance since January, although the defender came off shortly after an hour, meaning his availability for Tuesday's Champions League game at home to Atalanta is perhaps not guaranteed.

Eden Hazard, who has also been out since January, came off the bench in the second half and could play in midweek, when Madrid will start with a 1-0 advantage from the first leg.

Toni Kroos and Luka Modric were rested, perhaps with that game in mind, but both were needed by Zinedine Zidane before the end.

And a change in system to three at the back was not an obvious success as Zidane's team struggled to break down an Elche side that sits 17th.

"Against teams that sit back, it's always difficult," said Zidane. "We had to find a solution and in the end, we found a gap."

Madrid was the better team in the first half but there was hardly a chance to show for it, the only real opening falling to Benzema at the back post.

Elche took the lead early in the second half. Ramos shielded his eyes as if struggling with the sun and the corner found Dani Calvo, who climbed above Raphael Varane to head in off the crossbar.

Ramos, Isco and Fede Valverde made way for Modric, Kroos and Rodrygo, and 10 minutes later Madrid was level. Modric collected a short corner and swung a cross into the back post, where Benzema nodded in.

There were 17 minutes left to find a winner but it came in injury-time. Benzema scooped the ball up to Rodrygo on the edge of the area. He cushioned it back to the striker, who caught the ball in the air with a brilliant shot that flew in off the far post.