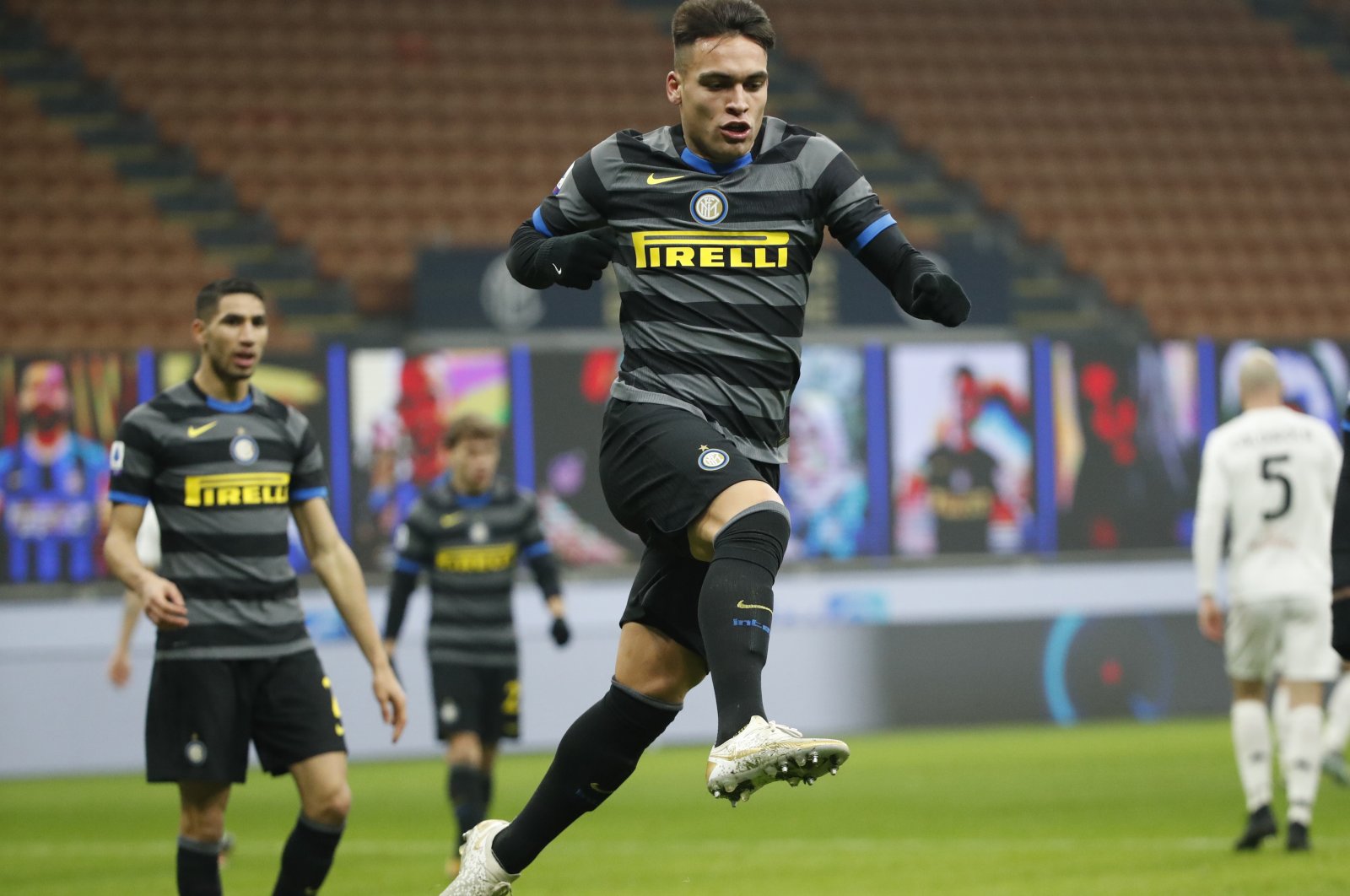 Inter Milan's Lautaro Martinez celebrates a goal during a Serie A match against Benevento at the Giuseppe Meazza stadium, in Milan, Italy, Jan. 30, 2021. (Reuters Photo)
by Agencies Feb 12, 2021 12:37 pm
RECOMMENDED

Second-place Inter Milan faces a tough home clash with in-form Lazio on Sunday, a week before a table-topping derby with Serie A leader AC Milan.

Inter exited the Italian Cup against Juventus in the semifinals on Tuesday, after knocking out Milan in the previous round. The domestic league is now Inter’s only goal for the season.

"We try to work as hard as possible and always look up," Inter coach Antonio Conte was quoted as saying by Deutsche Presse-Agentur (dpa) after drawing 0-0 with Juventus, which won the home leg 2-1. "We would have liked to do well in the Champions League, and we've once again gone out at the semifinal stage of the Coppa Italia for a second consecutive year.

"We'll continue to work to try to be where we would like to be, but we aren't there yet. The important thing is that Inter have regained credibility and have started to strike fear into opponents again," Conte said.

Inter is the Serie A top-scoring team with 51 goals, despite Romelu Lukaku and Lautaro Martinez only getting three and five, respectively, in the last eight league games.

Lazio skipper Ciro Immobile has fared better with three goals in the last four outings to go level on 14 with Lukaku and Milan veteran Zlatan Ibrahimovic, as Juventus' Cristiano Ronaldo is top on 16.

"We are confident," Immobile said after last weekend's 1-0 win against Cagliari. "Champions League had drained us of mental and physical energies, but now we have relaunched ourselves with six straight (Serie A) win. We'll have to tackle Inter with determination."

Lazio moved to fifth place past Napoli, which lost 2-1 at modest Genoa last weekend and exited the Italian Cup through Wednesday's 3-1 defeat at Atalanta.

The Neapolitans will now welcome third-place Juventus Saturday, as their early October game in Turin remains to be rescheduled.

Things are rosier for Gattuso's former Milan teammate Andrea Pirlo, who in August began his coaching career at champion Juventus, where he won the first four in a record run of nine straight league titles as a player.

"I hoped to get to this stage of my debut campaign and be in the last 16 of the Champions League, have won the Super Cup (beating Napoli 2-0 in January) and reached the final of the Coppa Italia," Pirlo said. "But we haven't done anything yet so we have to keep working away and stay focused."

Meanwhile, fresh from breaking the 500 club goals barrier, Ibrahimovic will continue to lead Milan's bid for a first Serie A title in a decade when the pacesetters travel to Spezia on Saturday night.

The Swede's brace against Crotone last weekend took him to 501 club goals and put him on 14 in the league for the season at the ripe old age of 39.

"He brings us a lot. With all the experience he has acquired, he tries to take us to the highest level with him, he always seeks perfection," teammate Ismael Bennacer told Agence France-Presse (AFP) in an interview. "He gives us a lot of advice."

Ibrahimovic will be looking to add an incredible league total racked up in just 11 appearances and help Milan extend its lead at the top.

Spezia, however, will be no walkover. Vincenzo Italiano's side sits 16th, six points above the drop zone, but has collected 10 points from its last six matches and won 2-1 at Europe-chasing Sassuolo last time out.