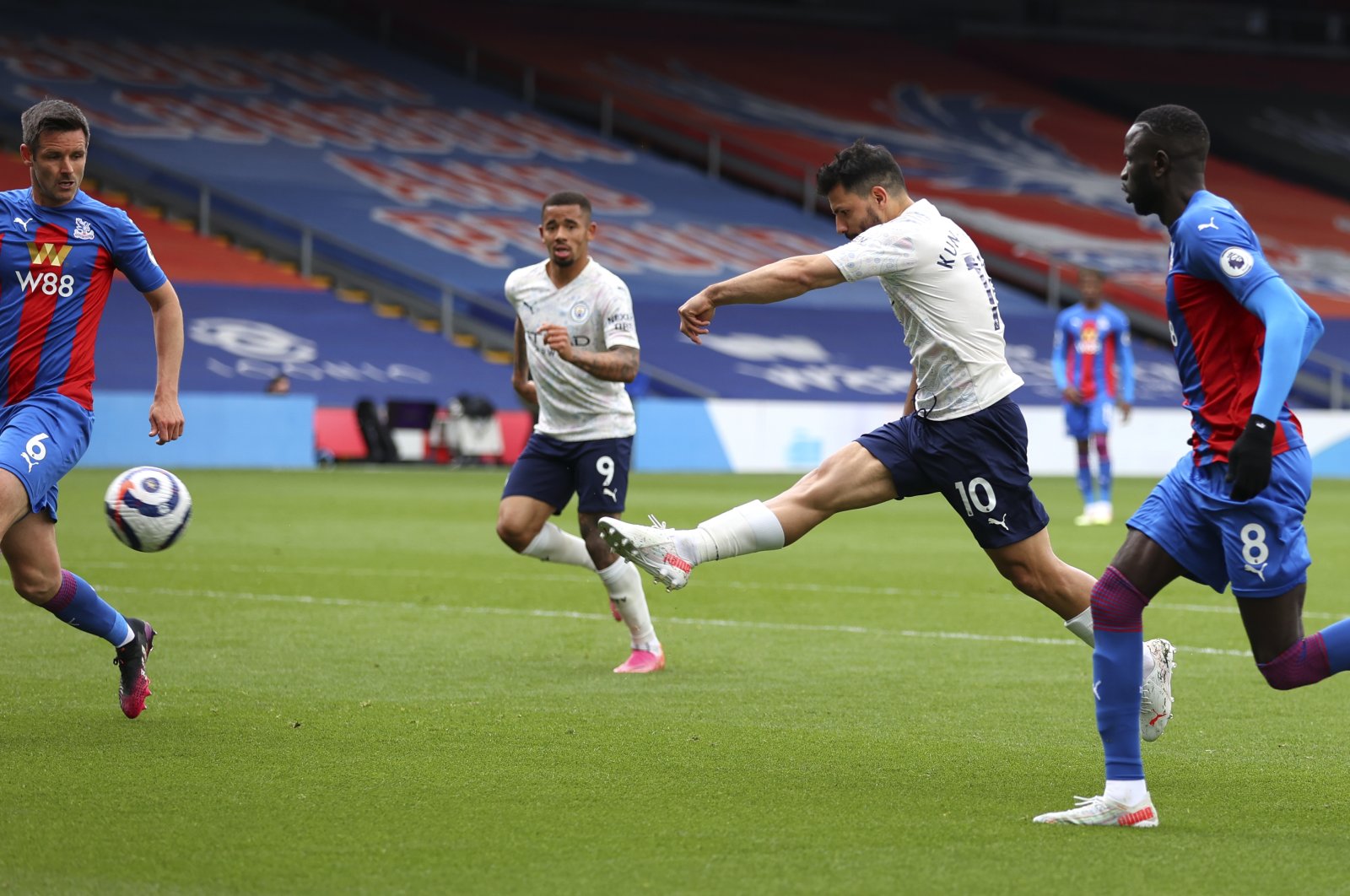 Anxiously awaiting the result of Sunday's Liverpool showdown of their city rivals Manchester United, Manchester City celebrated Saturday the return of the veteran star Sergio Aguero, who fired perfectly in a 2-0 victory over Crystal Palace in a win that might have sealed his team their third title in four years.

A minute later Ferran Torres's clinical low shot doubled City's advantage and the Blues could have racked up a bigger margin of victory as they turned on the style with Raheem Sterling denied by the woodwork and Joao Cancelo also going close.

With four games left, City has 80 points, 13 ahead of Manchester United who host Liverpool on Sunday knowing that defeat would seal the title for its neighbor.

"It was a long time that I hadn't played 90 minutes," Aguero, who scored only his second league goal of an injury-hit season, told BT Sport.

"The goal was good because maybe we can win the Premier League. We wait for tomorrow. Every game is difficult. Of course, if Liverpool win it's better."

Should United draw on Sunday it could still mathematically catch City but their goal difference is far inferior. If United wins, City can seal the title by beating Chelsea next weekend.

After being left in the shade by Liverpool's Jurgen Klopp last season, Guardiola knows City is as good as champions.

"We can start to put the champagne in the fridge, not to open yet, but it is there," he said.

City enjoys many options on the bench

The embarrassing wealth of options available to Guardiola was evident again as he left the likes of Kevin de Bruyne, Riyad Mahrez, Phil Foden, Ruben Dias and Kyle Walker on the bench, with one eye on Tuesday's Champions League semi-final against Paris St Germain which they lead 2-1.

Yet his starting line-up still oozed quality with an attacking quartet of Aguero, Sterling, Jesus and Torres.

Sterling, whose place on the team is no longer guaranteed, should have put City ahead after skipping into the box but he delayed his shot and his effort was blocked.

Jesus thought he had opened the scoring with a close-range volley but he had strayed offside and City, for all their possession, looked to be playing in third gear and failed to force a save from Vicente Guaita before the interval.

Palace's only real chance fell for Christian Benteke but his close-range effort on the turn was saved by Ederson.

It was left to Aguero, a veteran of four City title triumphs, to break the deadlock with a finish of stunning quality.

The 32-year-old Argentine, in the final weeks of his magnificent City career, was picked out by Benjamin Mendy's pass. His first touch was superb and his second sublime as he thrashed the ball past Guaita without breaking stride for his 182nd Premier League goal for City since joining in 2011.

His record-extending 258th goal for City left Pep Guardiola in awe. "What a goal, what an action, what a man,” the City manager said.

"We are going to enjoy the last games with him. He showed, with his goal, what he is. I am in love as a person.”

Torres threaded a shot past Guaita 83 seconds later, City's 700th goal under Guardiola, and they looked capable of running riot with Sterling thumping a shot against the post and whistling another effort just wide.

Cancelo also curled over the bar and Guaita denied Aguero a second goal late on as City closed in on the second part of what the team hopes will be a treble this season, having secured the League Cup last weekend.