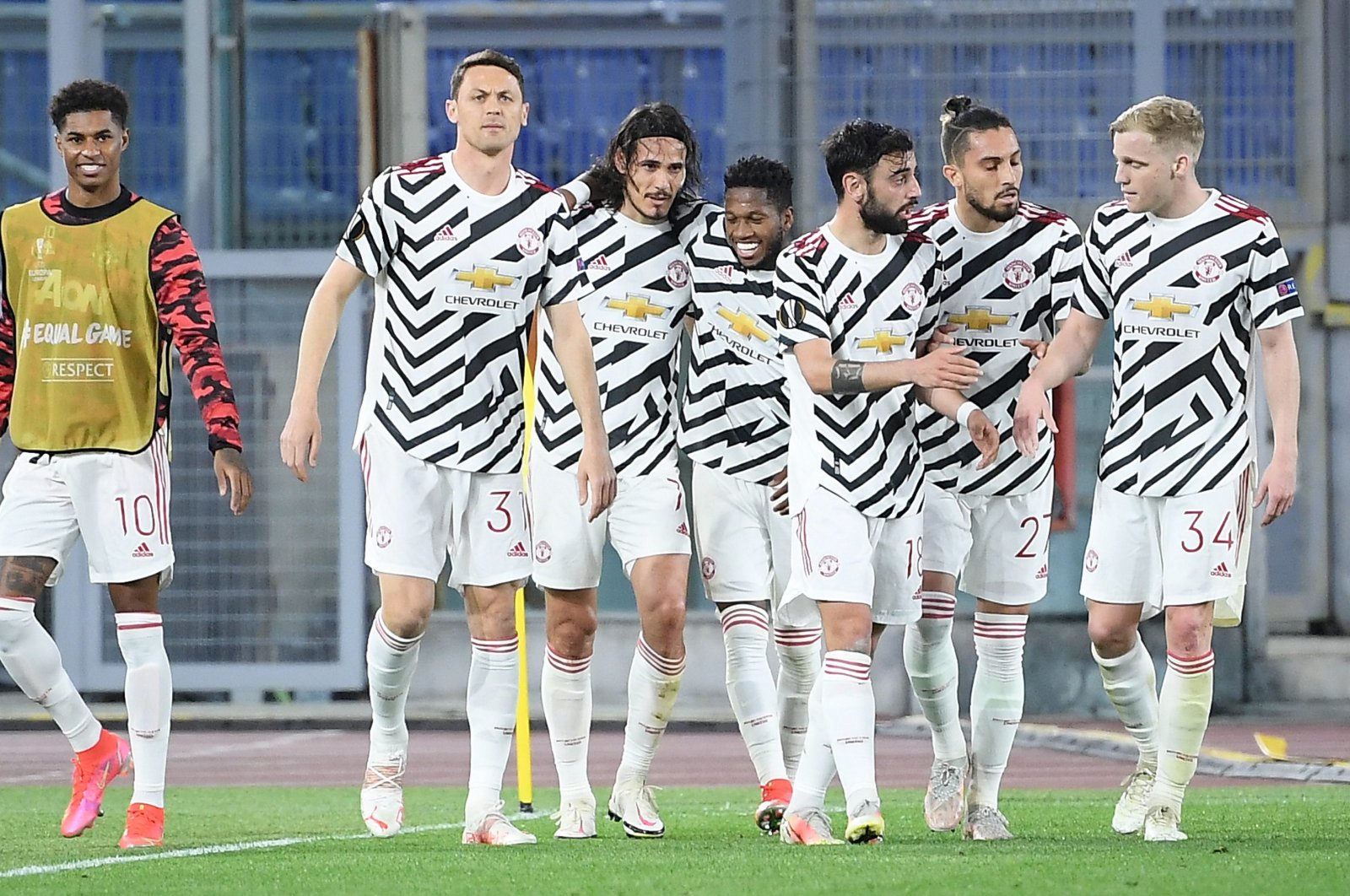 Manchester United players celebrate a goal during a UEFA Europa League match against AS Roma at the Olimpico stadium in Rome, Italy, May 6, 2021. (EPA Photo)
by Associated Press May 07, 2021 1:29 pm
RECOMMENDED

Manchester United and Villarreal are set to face each other for the Europe League trophy after the Premier League giant and the La Liga side managed to emerge victoried from their semifinal clashes on Thursday.

United advanced to the final despite losing to Serie A side Roma 3-2, but a 6-2 trashing in the first leg of the semifinals allowed Ole Gunnar Solskjaer’s side to advance.

An inspired goalkeeping performance by David de Gea ensured United was only beaten 3-2, allowing the English team to complete an 8-5 victory on aggregate.

It ended a run of four losses in the semifinals of major tournaments in the last 18 months for Solskjaer, who is under pressure to win United’s first trophy since 2017. That came in the Europa League, when Jose Mourinho was manager.

Yet Solskjaer was critical of his team for giving Roma so many chances at the Stadio Olimpico to turn around a semifinal that looked over.

“We played one very good half at Old Trafford that got us through,” he said. “The second half today was disappointing. Very, very poor.”

Roma created enough clear-cut opportunities to pull off what would have been another remarkable comeback, three years ago after it recovered from 4-1 down against Barcelona in the Champions League quarterfinals, winning the second leg 3-0 at the Olimpico to advance.

Goals by Edin Dzeko and Bryan Cristante, in the 57th and 60th minute, briefly put Roma 2-1 ahead and that was the least the Italian team deserved after regularly breaching United’s defense. The visitors were thankful for a slew of saves by De Gea in both halves, ensuring Nicola Zalewski's deflected 83rd-minute winner on the 19-year-old's debut proved only a consolation for Roma.

Villarreal will be United’s opponent in the May 26 final in the Polish city of Gdansk after Unai Emery's side held Arsenal to a 0-0 draw in the second leg of their semifinal, which was enough to secure a 2-1 aggregate win.

Emery will be looking for his fourth Europa League title after winning three straight with Sevilla and then taking Arsenal to the final two years ago.

“Satisfaction, pride, happiness,” Emery said when asked how he was feeling after the match. “We have to go to the final and beat Manchester United.”

On his first return to the Emirates since being fired in November 2019, Emery calmly walked out of the tunnel so late that he nearly missed the kickoff. He quickly shook his replacement Mikel Arteta's hand and then watched as his new team held a toothless Arsenal at bay without ever looking seriously threatened.

Emery is already the most successful coach in the history of the Europa League, winning it three times in a row with Sevilla from 2014-2016. But he failed on his fourth attempt in 2019, when Arsenal lost 4-1 to Chelsea in the final.

For Arsenal, the failure to overturn the deficit means the team is facing the likelihood of being shut out of European competition for the first time in 25 years.

Arsenal's elimination will anger fans further as the team sits mid-table in the Premier League and has little chance of qualifying for even the Europa League next season.