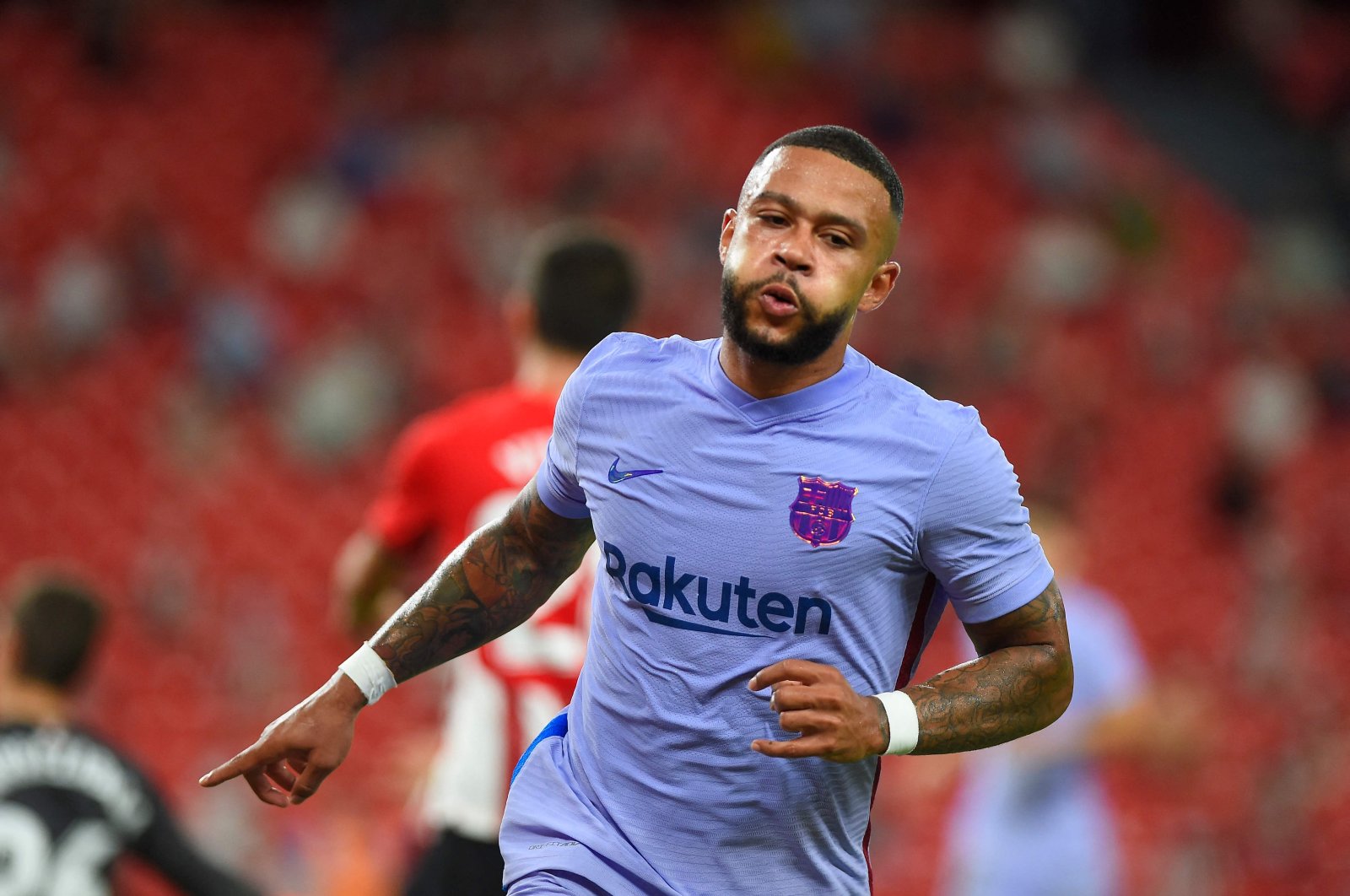 Barcelona newcomer Memphis Depay scored his first goal for the Spanish side to secure a late 1-1 draw for the Catalans against Athletic Bilbao on Saturday.

Depay found the net with a fine left-foot half-volley 15 minutes from time in the Basque Country for his first goal in La Liga since moving to Barcelona from Lyon.

Ronald Koeman's side had impressed in its first match of the post-Lionel Messi era as it beat Real Sociedad 4-2 last weekend, but it was fortunate to depart with a point from this game and it was impossible to avoid questions about the Argentine at full-time.

"I don't like to always talk about the same thing but he is the best in the world and the opposition might be more afraid if Messi is there," Koeman admitted.

"For us too, if there is a pass to Leo, normally he doesn't lose the ball, and today we gave the ball away too often in the first half.

It was a difficult night for Barcelona's defense in particular, with Gerard Pique coming off after half an hour and Eric Garcia being sent off in stoppage time for bringing down Inaki Williams.

Former Manchester City defender Garcia received news of his grandfather's death before the match and struggled throughout the 90 minutes, allowing Inigo Martinez to get away from him to head in the opener early in the second half.

"He is a great professional to play so well in a game after the death of his grandfather. We wish him all the best in his personal situation," said Koeman, who insisted the draw was the right result.

Athletic, though, will feel they should have won despite missing several key players, among them goalkeeper Unai Simon, who has not featured at the start of this season after helping Spain reach the Euro 2020 semifinals and then the final of the Tokyo Olympics.

Barcelona was unchanged from its opening victory meaning another start for Pedri, the brilliant young midfielder who also played at Euro 2020 and the Olympics and is now set to get a two-week holiday.

Martin Braithwaite, who netted twice against Real Sociedad, missed an early sitter for the visitors when he blazed over after great play by Depay.

Athletic, with 11,000 of its fans allowed into the 53,000-capacity San Mames for this game as coronavirus restrictions are gradually loosened in la Liga, then saw Oihan Sancet turn and crash a shot off the crossbar from 12 yards out.

Pique then came off to be replaced by Ronald Araujo, suggesting Koeman should not have played the center back who had reportedly been struggling with a minor injury before the game.

Athletic were seeking revenge for its 4-0 loss to Messi's Barcelona in the Copa del Rey final last April and it went ahead in the 50th minute when Martinez attacked a corner quite magnificently, getting ahead of Garcia to divert the ball into the far corner.

While Garcia played for Spain at the European Championship, fellow center back Martinez opted not to join Luis Enrique's squad because he wasn't "at 100% physically or mentally."

Koeman responded by withdrawing Braithwaite and Pedri and sending on Sergi Roberto as well as Yusuf Demir, the 18-year-old Austrian international signed in July on loan from Rapid Vienna.

Frenkie de Jong hit the bar with a brilliant attempted lob before Depay leveled a quarter of an hour from time, controlling Sergi Roberto's ball over the top and crashing a brilliant strike past goalkeeper Julen Agirrezabala at his near post.

Garcia then denied Athletic a chance of a last-gasp winner as he chopped down Williams just outside the area.

Promoted Mallorca are level with Barcelona and Valencia on four points after winning 1-0 at Alaves with a late Fer Nino goal.