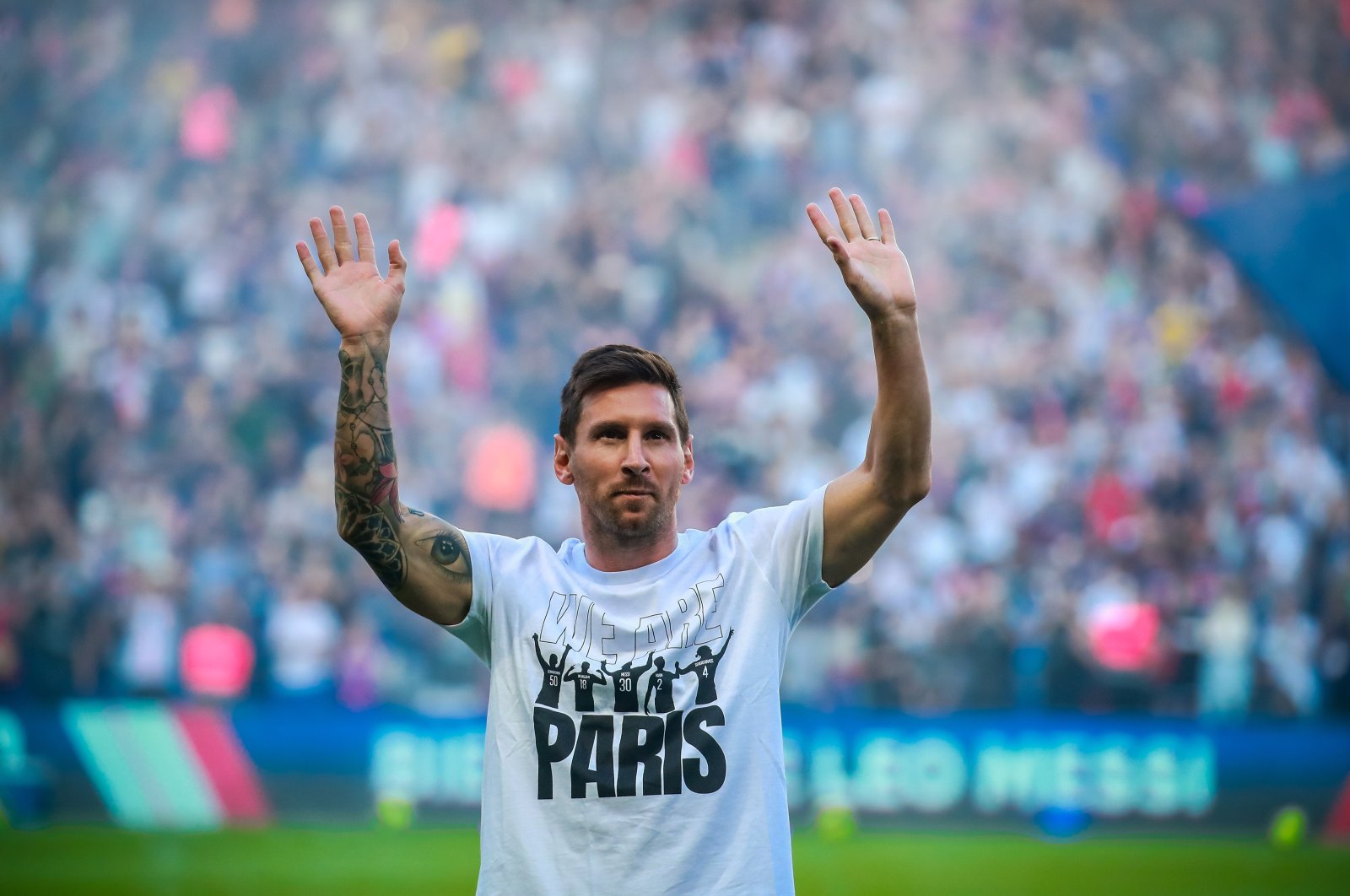 Lionel Messi was welcomed by a raucous crowd during his Paris Saint-Germain presentation in front of a full Parc des Princes Saturday.

The Argentinian star then watched his teammates beat Strasbourg 4-2 in Ligue 1 with Kylian Mbappe playing a starring role.

Messi received a rapturous reception as he ran out onto the pitch along with PSG's other summer signings, with a 48,000-full house greeting the six-time Ballon d'Or winner despite the welcome ceremony taking place an hour before kick-off.

Messi joined fellow recruits Sergio Ramos, Gianluigi Donnarumma, Georginio Wijnaldum and Achraf Hakimi on a stage set up on the turf at the Parc des Princes, and the flashy presentation ceremony threatened to overshadow the match itself.

The Argentine later watched from the stands alongside Neymar and Angel di Maria – the trio not yet considered match-fit having enjoyed an extended break after playing at the Copa America – as Mauricio Pochettino's team made it two wins from two Ligue 1 matches this season.

They led 3-0 at half-time thanks to goals by Mauro Icardi and Julian Draxler either side of a Ludovic Ajorque own goal, but Kevin Gameiro and Ajorque netted after the interval to bring the visitors back into the contest.

However, Pablo Sarabia made sure of the win late on after Strasbourg had been reduced to 10 men in the first match played before a full house at the Parc des Princes since before the COVID-19 pandemic struck in March last year.

"With all that has been happening at the club, it was not easy to stay focused on the game," Pochettino admitted to broadcaster Canal Plus.

All wanted to get a glimpse of Messi, but the Argentine is not likely to make his Paris debut for another couple of weeks yet.

While Messi is the new idol of the PSG support, those fans jeered when Mbappe's name was read out by the stadium announcer ahead of kick off.

The France striker is in the spotlight with speculation that he will seek a move away from PSG before the transfer window shuts – he has so far refused to extend his contract, which expires at the end of the campaign.

"Kylian is focused on what he has to do here. He had a really good game and he needs to continue like that," Pochettino added.

Mbappe played a key part in PSG's victory, which looked a certainty from the moment Icardi headed in Abdou Diallo's cross in the third minute.

The second goal arrived in the 25th minute when Mbappe's shot went in via a cruel deflection off the face of Ajorque, and two minutes later it was Mbappe's cross that was turned in at the back post by Draxler.

Nevertheless, former PSG striker Gameiro pulled one back for Strasbourg with a well-taken header not long after half-time, and giant frontman Ajorque then scored with a header of his own to make it 3-2.

Mbappe had come close in between those goals and PSG was sweating before its opponents had defender Alexander Djiku sent off nine minutes from time when a foul on Icardi earned him a second booking.

PSG then secured a 4-2 win with four minutes left when Mbappe burst towards the byline and cut the ball back for substitute Sarabia to convert.

Earlier Lille – who defied expectations to pip PSG to the title last season – suffered a humiliating 4-0 defeat at home to Nice, whose coach Christophe Galtier joined in the summer from the champions.

Galtier oversaw Lille's remarkable title triumph in May but then ended his three-and-a-half-year association with the club and headed south to take charge of an ambitious Nice outfit owned by Ineos, the group chaired by British billionaire Jim Ratcliffe.

Denmark striker Kasper Dolberg bagged a brace for Nice, his goals coming either side of a Hicham Boudaoui strike and a penalty converted by Amine Gouiri.