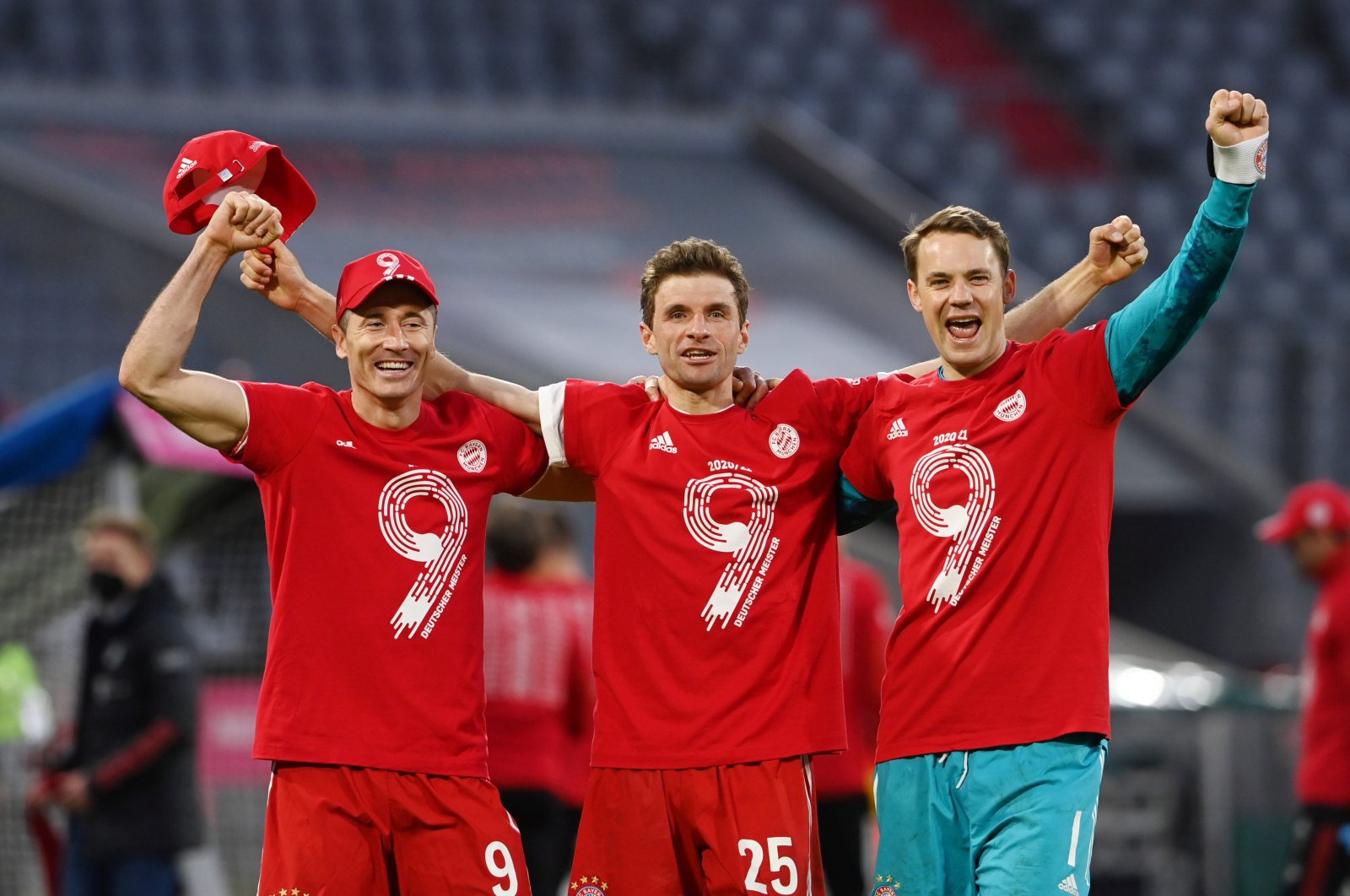 After securing its ninth straight Bundesliga title on Saturday, Bayern Munich already has its eyes on a decade of dominance in the league.

The Bundesliga giant celebrated its success with a 6-0 thrashing of Borussia Monchengladbach.

Robert Lewandowski scored a hat trick to leave him on 39 league goals this season – one short of Gerd Mueller's all-time Bundesliga record – as the champions swept Gladbach aside at the Allianz Arena.

The players learned they were champions again while still warming up following Dortmund's victory.

Board member Oliver Kahn challenged Bayern to secure a 10th title in a row before they had even lifted the trophy.

"We watched the Leipzig game together, the atmosphere was great," said Kahn. "You don't get used to it, it's an incredible achievement.

"Now we can do something next season that no team in the world has ever done: become champions 10 times in a row."

The only blot on a near-perfect night for Bayern was a red card for Tanguy Nianzou for a clumsy tackle 15 minutes from time.

Bayern wasted no time in hitting their stride, with Lewandowski finding the bottom corner of the net with just under two minutes gone.

Kingsley Coman struck the post before Jamal Musiala's pass picked out Thomas Mueller to slot in his 11th league goal of the season, before Lewandowski volleyed home his second on 34 minutes.

Kingsley Coman made it 4-0 before the break, then won a penalty which Lewandowski converted in the 66th minute to leave him one goal short of Gerd Mueller's historic mark, before Leroy Sane added a late sixth.

Julian Nagelsmann, the 33-year-old coach who will leave Leipzig to replace Flick at Bayern next season, offered a terse "congratulations on a deserved title" to his future employers.

Earlier, England winger Jadon Sancho netted twice as Dortmund's win lifted them into the Champions League places, but Eintracht Frankfurt can retake the fourth spot if it beats Mainz on Sunday.

Even without injured striker Erling Braut Haaland, Dortmund was 2-0 up early in the second half thanks to goals from Marco Reus and Sancho.

Leipzig fought back through a Lukas Klostermann header and Dani Olmo's equalizer, only for Sancho to grab the winner.

"We showed a lot of morale, the game had absolutely nothing to do with the final in Berlin, but of course we want to win on Thursday too," said Reus.

Dortmund hopes to have Haaland back from a thigh problem before the final, and even with its top scorer watching from the stands, the hosts still raced into the lead after less than seven minutes.

Reus span out of Lukasz Piszczek's pass, sprinted behind the defense and took a beautiful back-heeled ball from Thorgan Hazard before sweeping his shot past Leipzig goalkeeper Peter Gulacsi.

Dortmund goalkeeper Marwin Hitz did not come out for the second half after being injured colliding with his centre back Manuel Akanji just before the break and was replaced by Roman Burki.

Dortmund doubled their lead just six minutes after the interval with a superb piece of skill from Sancho, who cut inside after a Raphael Guerreiro pass and fired in off the far post.

The visitors pulled a goal back on 63 minutes when Emil Forsberg floated in a corner and Klostermann steered his header past Burki.

However, Sancho snatched all three points when he flicked the ball to Guerreiro, took a return pass and slotted in to hand Bayern the title.