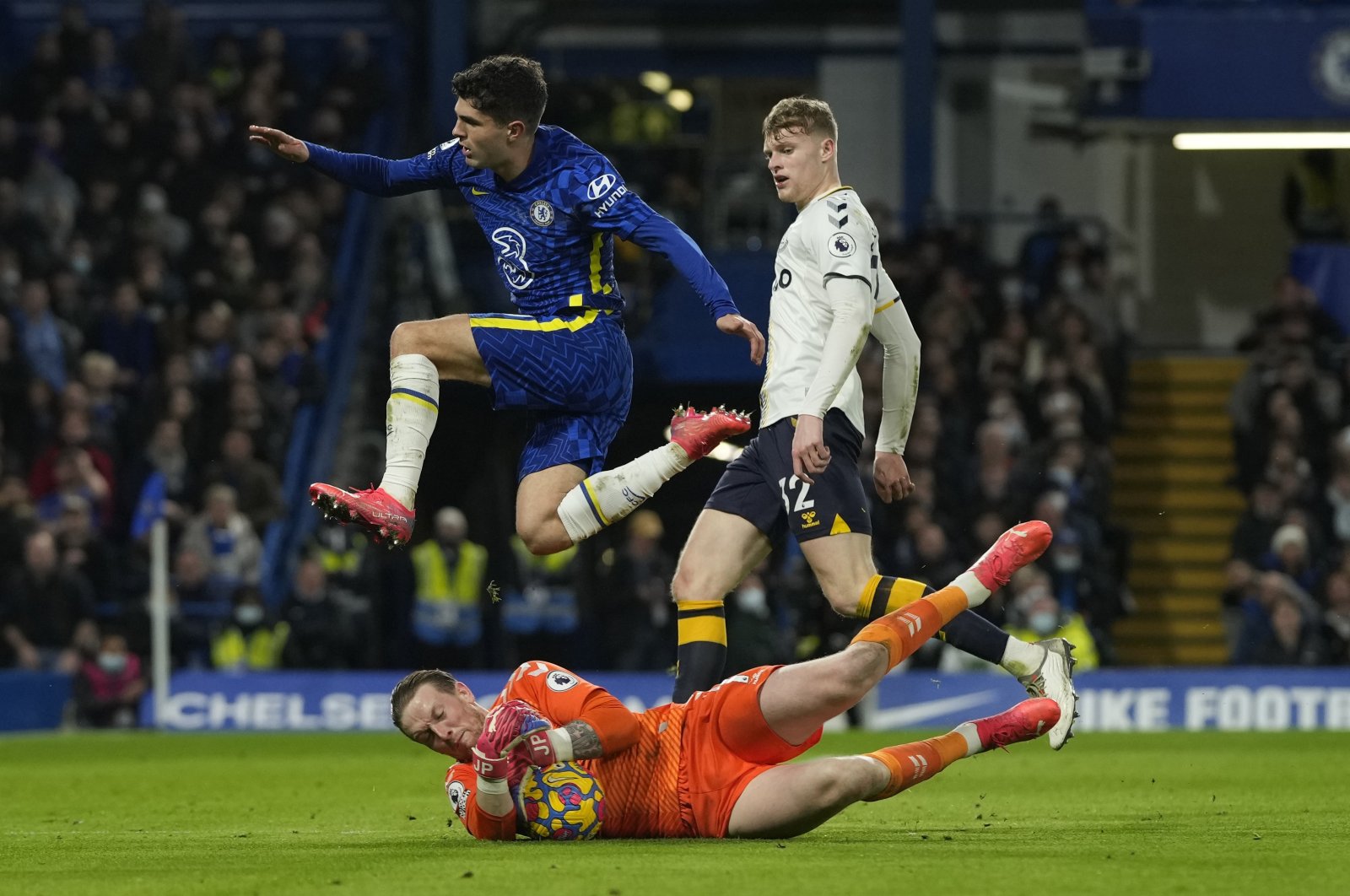 Everton's goalkeeper Jordan Pickford saves on an attempt to score by Chelsea's Christian Pulisic during a match at the Stamford Bridge stadium, in London, United Kingdom, Dec. 16, 2021. (AP PHOTO)
by Daily Sabah with Reuters Dec 17, 2021 10:23 am

While coronavirus infections pile up in the Premier League, leading to the postponement of some matches, the race to the top continues unabatedly with this weekend's games

The COVID-19 pandemic dampened the mood in the Premier League, but teams are gearing up for weekend action in their title race despite new infections possibly derailing U.K. football as Manchester City, Liverpool and Chelsea pursue title ambitions in the three-way race.

City, who leads the table by a point, travels to relegation strugglers Newcastle United, while second-placed Liverpool visits Tottenham Hotspur, who has had its last two league games postponed because of infections. Third-placed Chelsea, who was deprived of three players because of COVID-19 in its 1-1 home draw with Everton on Thursday, is first up at Wolverhampton Wanderers.

Whether all or any of the games go ahead as planned, however, is a matter of some doubt. The league has ruled out a "pause" for the season to allow clubs to recover their squads, although the surging omicron variant has put paid to half of the weekend's fixtures, including Manchester United's home game with Brighton & Hove Albion. Aston Villa, who has also reported infections, is still scheduled to host Burnley on Saturday with Leeds United also in action against fourth-placed Arsenal in the late kickoff.

Despite the distractions and uncertainty, the title rivals will be keenly aware that the season is reaching a crucial phase and any slip-ups now could prove extremely costly.

Not that champions City look remotely flustered, having put seven goals past Leeds United on Tuesday. If any squad can cope with the current strains it is Pep Guardiola's at City. With quality options in reserve, the team is beginning to accelerate at just the right time having won its last seven league matches. Six players were on target in the 7-0 win against Leeds, with Kevin de Bruyne striking twice, and Newcastle's creaky defense will not be relishing City's visit on Sunday.

Liverpool kept up the pressure at the top as it came from a goal down to beat Newcastle 3-1 on Thursday, despite having Virgil Van Dijk, Fabinho and Curtis Jones missing because of positive COVID-19 tests on the day of the game. Juergen Klopp said he "hoped" the Tottenham game would go ahead but did not sound too optimistic. "It's a really tricky situation. Nobody knows exactly how we'll be tomorrow," the German said on Thursday. "I've never had three players on match day pull out. The most important thing is because the boys are vaccinated they will not feel it really. That's good. We have to wait for them. "Should we stop the league I have no real answer for it. If you stop it for two weeks and we come back, I really don't know what to do. There are plenty of questions we need to find answers for but I don't have the solution."

Chelsea's surprise home draw with Everton left the team four points behind City and Thomas Tuchel's side face a tough task at Wolves, who sit eighth after a midweek win at Brighton. Asked if the title race should be put on hold while the protagonists deal with COVID-19 infections, Tuchel said he did not want to get involved in sports politics. "We are all worried about COVID, it is close to us, we had four positives. Other games get canceled, ours didn't. If they decide we have to play, we play," he told reporters.