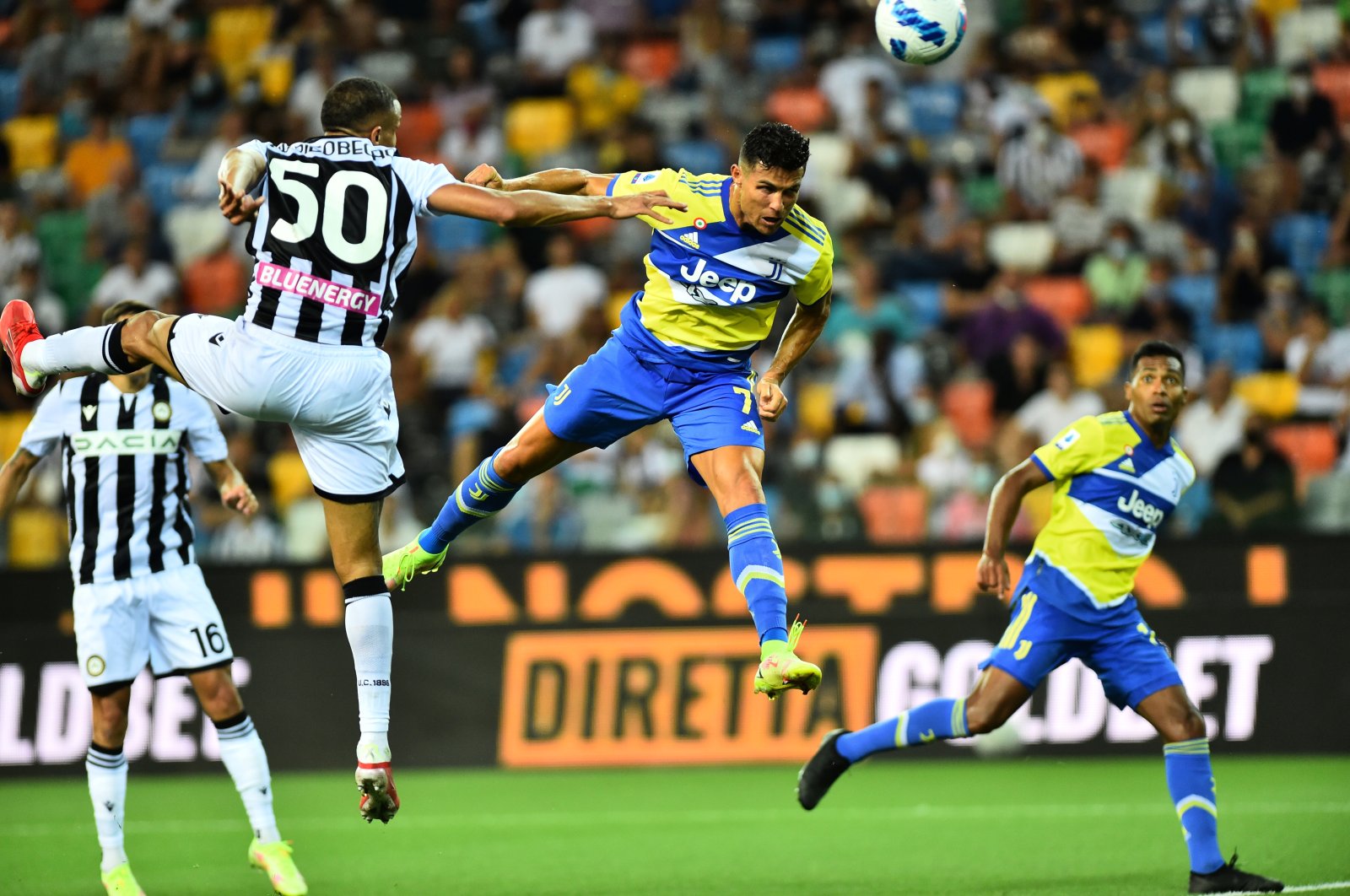 Juventus' Cristiano Ronaldo scores a goal that is later disallowed after a VAR review during a Serie A match against Udinese at the Dacia Arena, Udine, Italy, Aug. 22, 2021. (Reuters Photo)
by French Press Agency - AFP
Aug 23, 2021 10:30 am

Cristiano Ronaldo came off the bench on Juventus' season opener before being denied a last-gasp winner to save his side from a dramatic 2-2 draw at Udinese on Sunday.

Serie A newcomer Jose Mourinho, in the meanwhile, got off to a winning start at Roma with a 3-1 victory over Fiorentina.

Ronaldo started on the bench at the Dacia Arena in Udine amid rumors he is looking for a way out of the Italian giants, but he almost snatched the three points deep into stoppage time after Juve insisted he was going nowhere this term.

After the match returning coach, Massimiliano Allegri played down the controversy, saying that he was always planning to bring on Ronaldo.

"Cristiano is OK ... It's the start of the season and seeing the condition everyone is in and thinking about the game, especially at the beginning, I put him on the bench knowing that there would be a need for him to come on," he told broadcaster DAZN.

"He made himself available, like everyone. He played well, even scored a goal but unfortunately, it didn't stand."

Allegri's Juve looked to be cruising to victory when Paulo Dybala, wearing the captain's armband, and Juan Cuadrado put them two ahead midway through the first half.

Ronaldo entered the field to loud applause from the Juve fans on the hour mark with Juve leading 2-1 and he was unlucky not to restore their two-goal advantage when his header from a Dybala cross flashed wide.

And with just seconds left he wheeled away after meeting Federico Chiesa's pinpoint cross with a trademark header, celebrating with his jubilant teammates who thought he had saved their skins.

However, he could only watch on in desperation as his winner was chalked off by VAR.

It was the most dramatic moment in an eventful night in the Italian top flight, with six red cards in four matches and three big-name managers returning to the touchline.

The one with the biggest reputation – Mourinho – was made happy by two assists from new signing Tammy Abraham who shone on his Roma debut at the Stadio Olimpico.

With Fiorentina already down to 10 men in the 26th minute, Abraham slipped through Henrikh Mkhitaryan whose neat finish was given as a goal after a long VAR check.

However great work again from Abraham – who also hit the bar – led to Roma retaking the lead through Jordan Veretout four minutes later, the 23-year-old just about staying onside before rolling a perfect low cross which allowed the French midfielder to slot home.

Veretout made sure Mourinho got three points from his first match in Serie A since winning the league with Inter Milan in 2010 when he rolled home the third in the 79th minute after collecting a brilliant Eldor Shomurodov pass.

"I liked the spirit, the sacrifice the work we put in after the super difficult match on Thursday. But we had difficult moments that I wasn't expecting."

Luciano Spalletti also triumphed on his return to football with Napoli, his team running out 2-0 winners over promoted Venezia despite playing three-quarters of the match a man down after striker Victor Osimhen was sent off for punching Daan Heymans.

Lorenzo Insigne opened the scoring with a 62nd-minute penalty after having blazed over a spot-kick just minutes before, and former Fenerbahçe player Eljif Elmas drilled home the second 11 minutes later to secure the win.

There was no lack of drama in Sunday's other match, with Bologna beating new boys Salernitana 3-2 in a match in which three players were sent off.