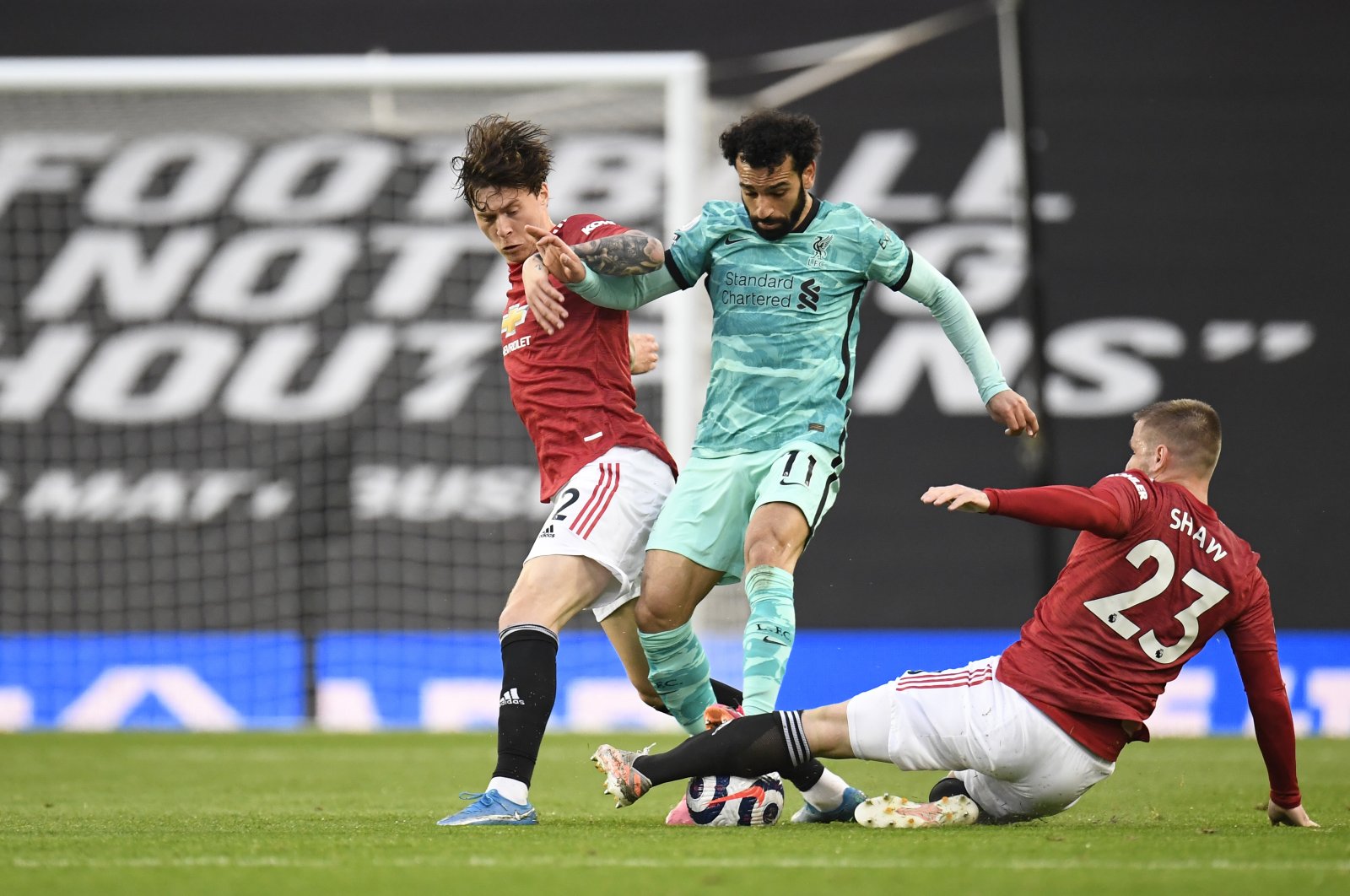 Liverpool's Mohamed Salah (C) duels for the ball with Manchester United's Luke Shaw (R) during a Premier League match at the Old Trafford stadium in Manchester, England, May 13, 2021. (AP Photo)
by Reuters Oct 22, 2021 11:32 am
RECOMMENDED

Manchester United manager Ole Gunnar Solskjaer may have breathed a sigh of relief following the chaotic midweek Champions League victory over Atalanta, but his job does not get any easier as his side hosts an in-form Liverpool in the Premier League.

Sunday's clash is the first of what could be a defining set of fixtures for United and Solskjaer with a resurgent Tottenham Hotspur and champion Manchester City on the horizon.

United has assembled an attack that is the envy of several clubs, but Solskjaer has yet to get the best out of his team which sits in sixth – five points behind leader Chelsea – following humbling defeats by Aston Villa and Leicester City.

The results led pundits to question whether Solskjaer is the right man to craft a United team that gets the best out of its individual talents and plays with a clear philosophy, rather than a disjointed outfit that relies on flashes of individual brilliance to save the day.

Much of the criticism has been directed at United's forwards, who critics say do not press opponents as much as other top sides. Solskjaer will be able to observe firsthand how Jurgen Klopp has set up his team to win the ball back and create chances.

Liverpool, which won 4-2 at Old Trafford in May last season, is the only team to remain unbeaten this campaign. It travels to United in ominous form, having scored at least three goals in each of its last eight away games in all competitions.

Chelsea leads Liverpool by one point and is the favorite to finish the weekend on top of the standings.

Thomas Tuchel's side, which has the joint-best defensive record in the top flight, hosts winless Norwich City, who have scored only twice this season.

Tuchel has injury worries, however, after potentially losing both Romelu Lukaku and Timo Werner, while Christian Pulisic continues to nurse a foot problem that has sidelined the American for more than a month.

Newcastle, also seeking its first win of the season, begins the post-Steve Bruce era with a trip to Crystal Palace, with Graeme Jones serving as interim manager until the club finds a replacement.

Arsenal kicks things off on Friday when it hosts Aston Villa – a team that has won four times at the Emirates, as well as the last three meetings between the two sides without conceding.