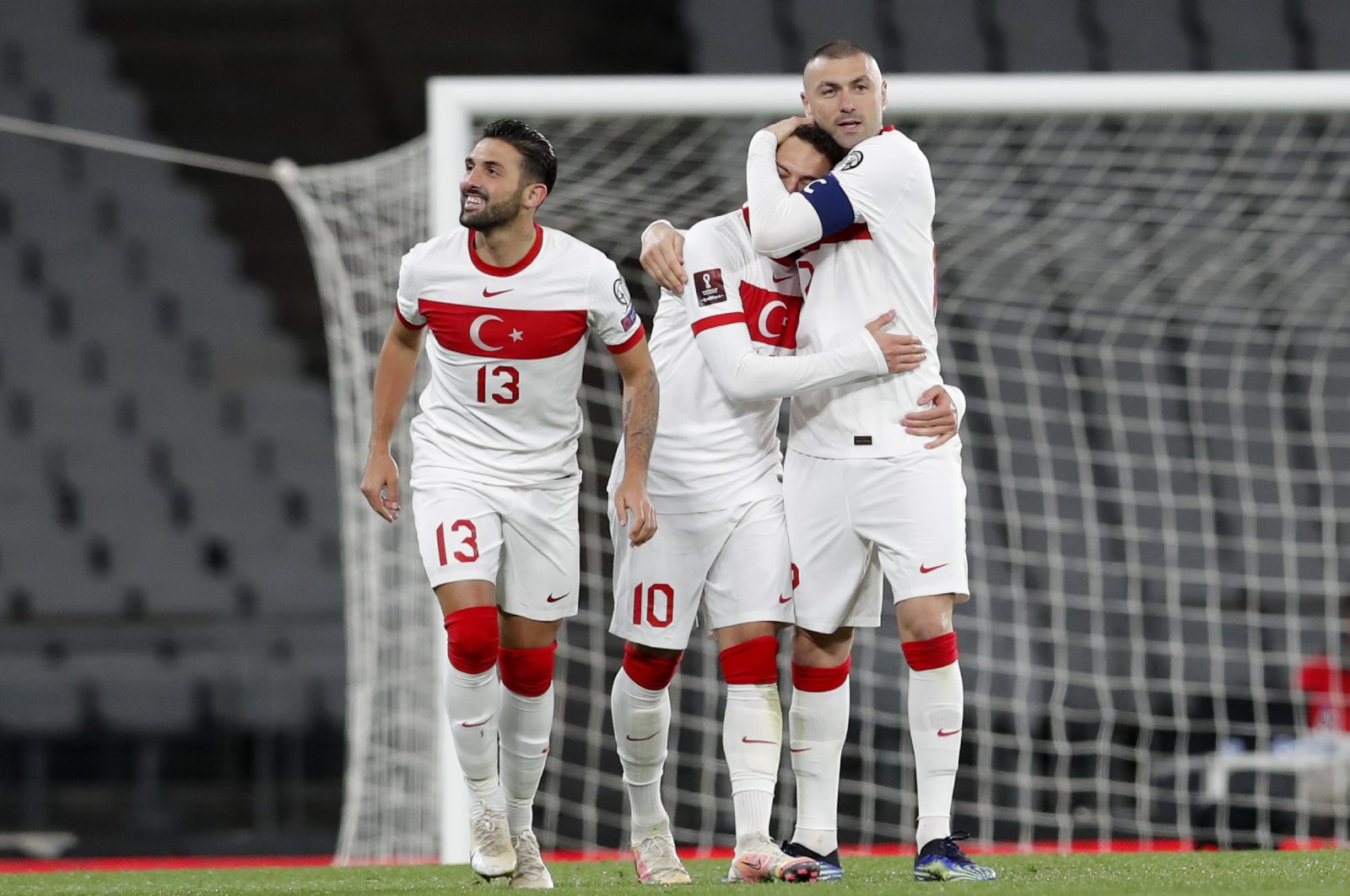 Turkey players celebrate a goal during a World Cup 2022 qualifying match against the Netherlands at the Atatürk Olympic Stadium, in Istanbul, Turkey, March 24, 2021. (AP Photo)
by Daily Sabah Mar 26, 2021 2:20 pm

Starting the World Cup 2022 qualifiers by defeating the group's most formidable team 4-2, Turkey will face the challenging Norway test with a fresh boost of confidence

Making a superb start to the 2022 World Cup qualifiers by hammering the Netherlands 4-2 on Wednesday, Turkey will face Norway on Saturday for its next test.

Following Wednesday’s victory, coach Şenol Güneş and his men will look ahead with a little more confidence, but before they can secure a ticket for the tournament in Qatar, Güneş’s side will need to prove to everyone that the team’s performance against the Netherlands was not a fluke.

While Güneş proved his mettle by securing a place for Turkey in this summer’s Euro 2020 tournament, the team has had a questionable form in the past year, especially in the UEFA Nations League.

Despite losing only three games since the start of Güneş’s second stint at the national team, the Netherlands victory marked the second time Turkey managed to win a match in its previous nine games.

Considering that Turkey has never started a World Cup qualifier with consecutive wins, Saturday’s match could cut short the upbeat mood in the Turkish team. With players like Erling Haaland and Alexander Sorloth, Norway is considered the second-biggest threat to Turkey in Group G, after the Netherlands.

Defeating Gibraltar 3-0 on Wednesday, Norway had been getting mixed results for much of the past year. Despite losing only three of its last 15 matches, Norway failed to qualify for the Euro 2020 after a dramatic loss to Serbia in extra time.

And similar to Turkey, the team is no stranger to World Cup disappointments. The last time Turkey managed to qualify for a World Cup was in 2002 when the team finished the tournament third, much to the world’s surprise. Norway, on the other hand, has been longing for more, as it last qualified in 1998.

So, if Güneş and his men could keep their nerve and not panic like they did in the third half of the Netherlands match, it wouldn’t be too surprising for them to return home with three points.

Striker Burak Yılmaz will undoubtedly be Güneş’s strongest weapon in Saturday’s match. Looking to build upon his hat trick against the Netherlands, Yılmaz has been proving his critics wrong with his recent form in both domestic and international games.

While many watching Saturday’s game will undoubtedly focus on Borussia Dortmund’s young start Erling Haaland, Norway will have a much more dangerous player against Turkey, Alexander Sorloth.

Becoming a local hero in Turkey’s Black Sea region for his incredible performance during his one-year tenure at Süper Lig side Trabzonspor, Sorloth became the Turkish top-flight’s most scoring player of 2020 and earned the respect of even fans of rival teams.

And it's his intimate knowledge of Turkish football that could give Norway the upper hand in Saturday’s match.

With Turkey’s goalkeeper Uğurcan Çakır being a former teammate, Sorloth played against many of Güneş’s men and could provide valuable information to Norway coach Stale Solbakken about their weaknesses.

As usual with coronavirus precautions, the match will be played behind closed doors at La Rosaleda Stadium in Spain’s Malaga. The match will kick off at 5 p.m. GMT.

Turkey will meet with Lithuania next on Tuesday, while Norway will visit Montenegro.