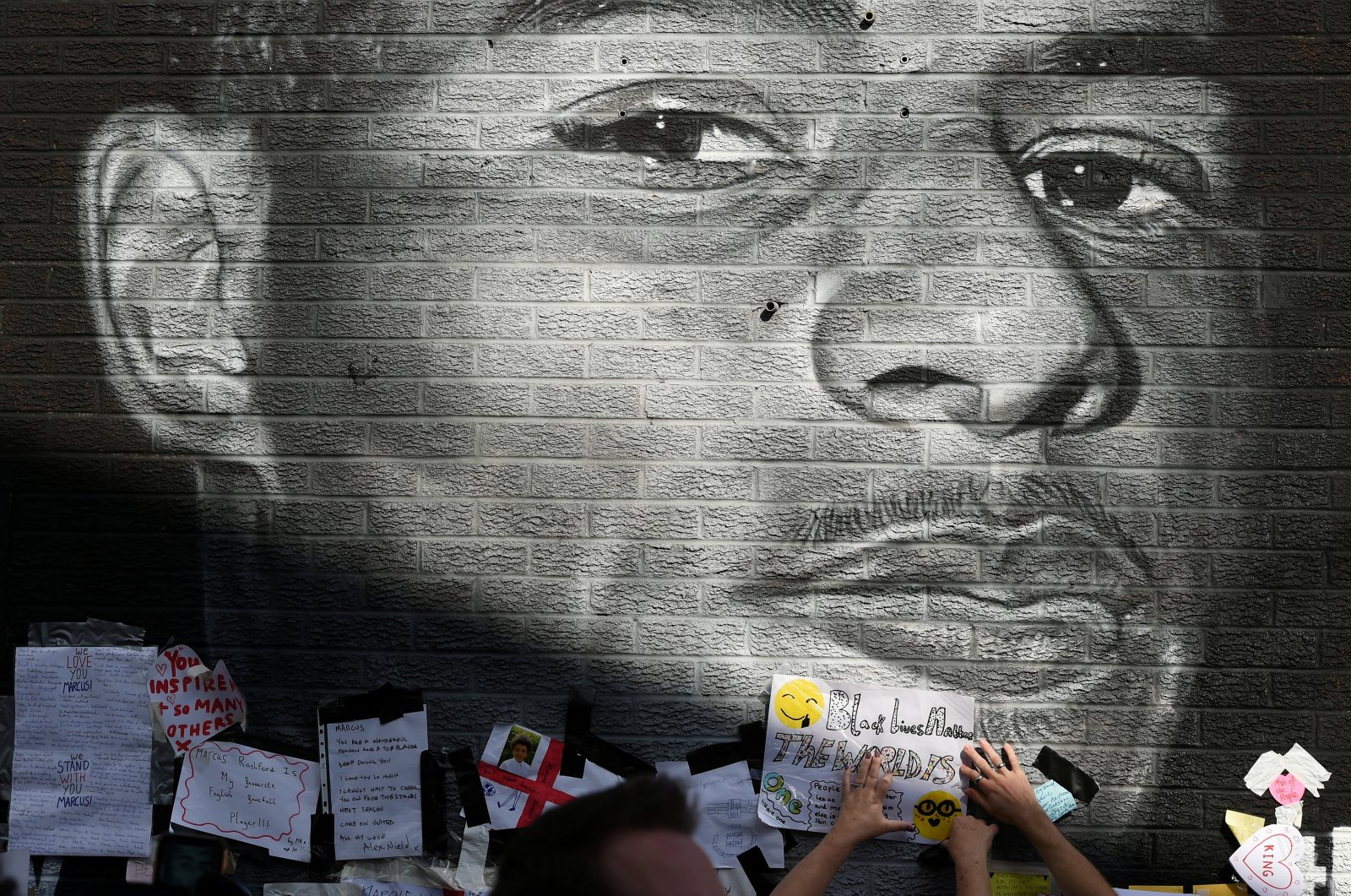 Stand Up to Racism Demonstration at the Marcus Rashford mural after it was defaced following the Euro 2020 Final between Italy and England, Withington, Manchester, Britain, July 13, 2021. (Reuters Photo)
by Agencies Aug 10, 2021 3:27 pm
RECOMMENDED

The Three Lions' European Championship run ended in a penalty shoot-out defeat to Italy in July, with Marcus Rashford, Jadon Sancho and Bukayo Saka failing to convert their spot-kicks.

The trio was subjected to online abuse in the aftermath, with police last week confirming they had so far made 11 arrests.

Twitter has now shared an overview of its analysis of "the abhorrent racist abuse" directed at players on the platform around last month's final.

"On the night of the Euros final, our automated tools kicked in immediately, and ensured we identified and removed 1,622 abusive Tweets in the 24 hours that followed," Twitter U.K. posted Tuesday.

"Only two per cent of the tweets we removed generated more than 1,000 impressions." the Twitter post said.

"While many have quite rightly highlighted the global nature of the conversation, it is also important to acknowledge the UK was – by far – the largest country of origin for the abusive tweets we removed," it added.

"Our data suggests that ID verification would have been unlikely to prevent the abuse from happening – as of the permanently suspended accounts, 99 per cent of account owners were identifiable.

"Soon, we will be testing a new product feature that temporarily autoblocks accounts using harmful language.

"There is no place for racist abuse on Twitter."

Following the game, Marcus Rashford wrote a statement on Twitter refusing to bow down to online racism, saying he will "never apologize for who I am" in an emotional statement.

"I'm Marcus Rashford, 23-year-old black man from Withington and Wythenshawe, South Manchester. If I have nothing else I have that," Rashford wrote in a statement on Twitter.

Rashford, who came on late in the second period of extra time, apologized for his penalty miss and said "something didn't feel quite right" when he came to take the kick.

"It's been playing in my head over and over since I struck the ball and there's probably not a word to quite describe how it feels. Final. 55 years. 1 penalty. History. All I can say is sorry. I wish it had gone differently," he wrote.

"I can take critique of my performance all day long, my penalty was not good enough, it should have gone in but I will never apologize for who I am and where I came from," Rashford added.