Young Turkey side hopes to upset Italy in Euro 2020 opener 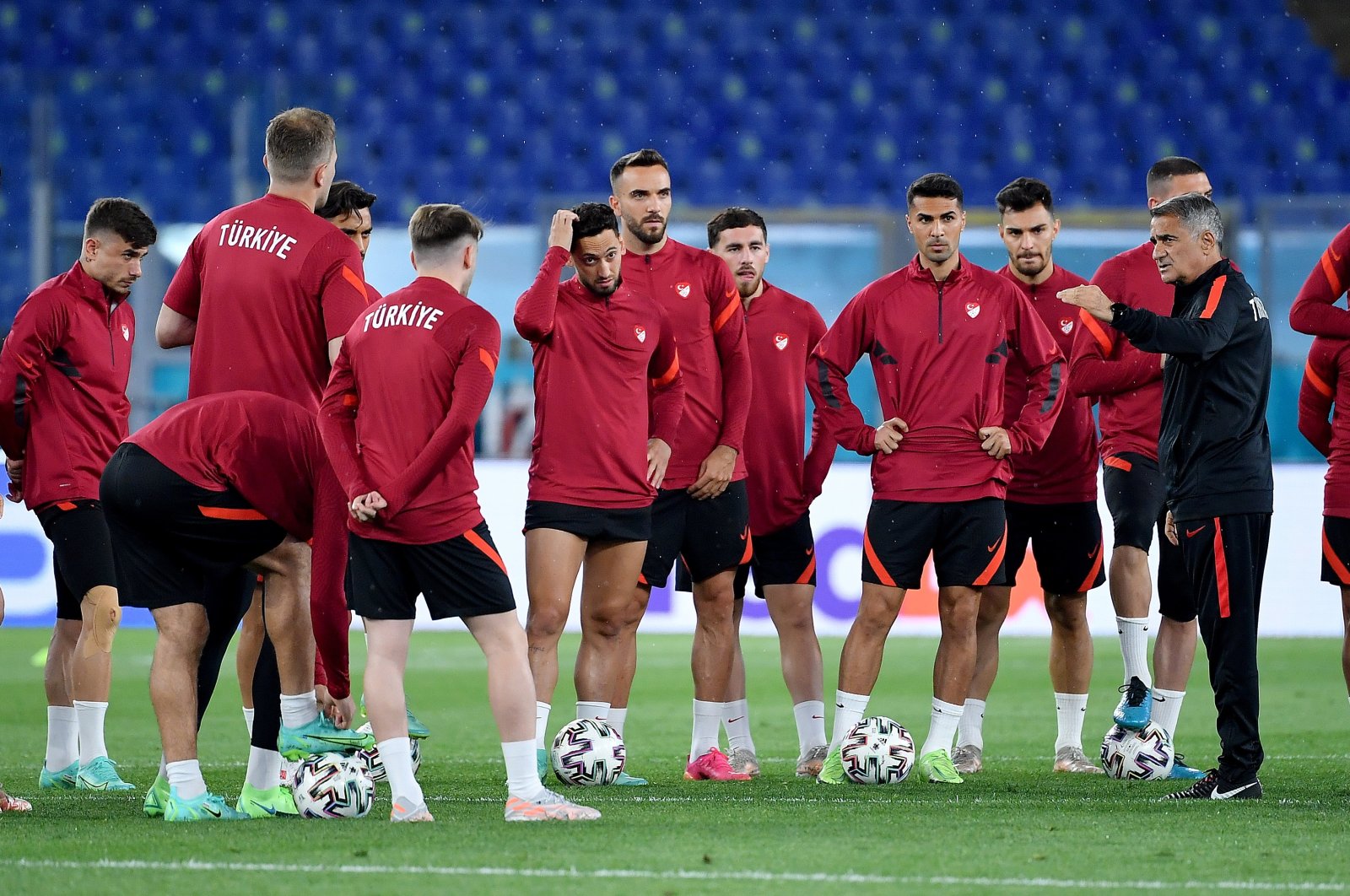 Turkey's national football team head coach Şenol Güneş (third right) talks to his players during a training session at the Olympic stadium in Rome, Italy, June 10, 2021, ahead of their match against Italy on Friday June 11. (EPA Photo)
by DAILY SABAH WITH AGENCIES Jun 10, 2021 10:47 pm
RECOMMENDED

Şenol Güneş’ young Turkish side will be looking to pull an upset of hosts Italy and get their campaign off to a commanding start in Friday’s Euro 2020 opener in Rome.

The veteran coach expects a “hard-fought” game but also believes Turkey can win.

“It will be a source of pride for us to beat Italy in the first game. We are not one of the favorites of the tournament as we arrive here but we would love to become a favorite,” Güneş told a news conference Thursday.

“On paper they seem better than us, but you never know what can happen on the pitch and I hope we'll have some points in our pockets at the end of the match,” the coach said ahead of Friday’s tournament opener in Rome’s Stadio Olimpico.

Güneş said they hoped to progress from Group A with the Italians and face them again in the final.

“I would love to reach the final and play it against Italy,” the coach noted.

“This is a game between two strong teams, and I believe Turkey can win."

Turkey face Italy, Wales and Switzerland in Group A at the June 11-July 11 tournament, led by captain Burak Yılmaz who played a key role in Lille winning their first French Ligue 1 title in 10 years this season.

The Turks’ best international performances include a semifinal appearance at Euro 2008 and a superb third-place finish in the 2002 World Cup, led by Güneş.

“Our journey in international football really started with the 2002 World Cup semifinals and everyone would love to win, but I’m sure we will continue to learn from this tournament,” the coach said.

“It will be a testing ground for us, but in 2002 we also had a team with a lot of players who had not played in the World Cup before, anything is possible.”

“If we lose this game we know the balance in the group will change a lot,” he added.

Günes has crossed paths with Italy’s Roberto Mancini who coached Turkish side Galatasary for a season winning the 2014 Turkish Cup with the Istanbul club.

“We know the strength of our opponent but also their weaknesses.”

“Italy are a great team, and I have great respect for them. This is the first time Turkey will have played an opening game, and for all but three of my players this will be a first Euro game,” he noted.

Nonetheless, Güneş said it will be “hard-fought in technical, tactical and physical terms.”

“I want to see the quality of my players on show.”

The coach also said it is good having players who are in Serie A clubs, “as they know how things work in Italy and the approach these teams take.”

“We respect the Azzurri we know they're very good players, but we're also a young side,” said Çalhanoğlu.

The midfielder said all the Turkey players were excited about playing in the tournament’s opening game.

“It’s a special match for all of us but especially for me because I will be playing against my teammates. We have been looking forward to this game for a long time and we hope to get at least one point,” he told the news conference.

Çalhanoğlu echoed Güneş’s wish to meet Italy in the final.

“I would like to meet Italy again in the final, of course. It has been a hard journey to get here, and now we want to stay,” he said.

“We’ve waited a long time for this and hope to represent Turkey as best we can.”