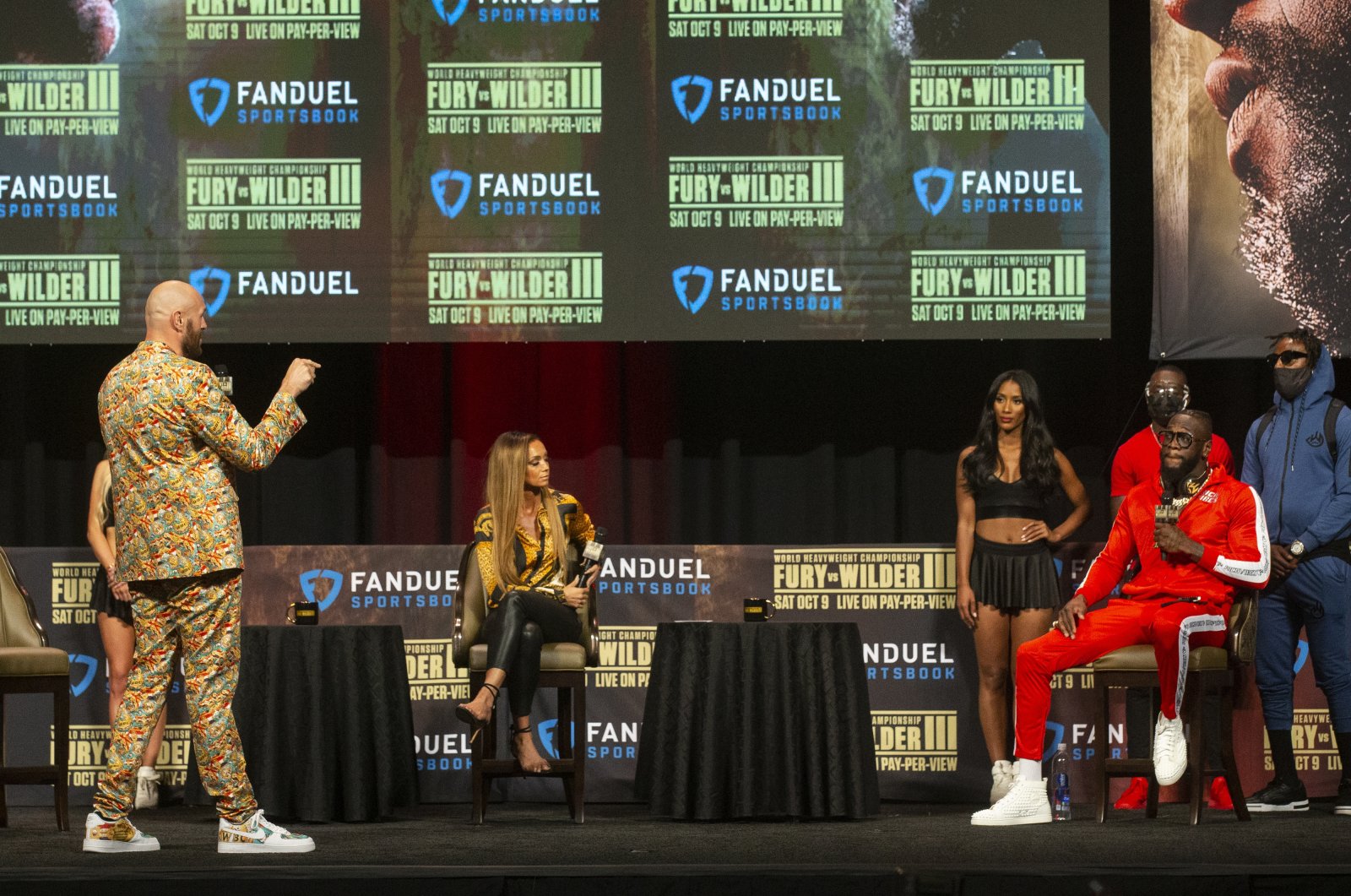 Insults and profanities flew around as things got tense between Tyson Fury and Deontay Wilder during a press conference ahead of their heavyweight world title fight.

Fury puts his World Boxing Council heavyweight belt on the line in Las Vegas on Saturday when he meets Wilder for the third time, 20 months after knocking out the American in their second fight.

Wednesday's press conference – broadcast live on U.S. television – saw expletives and sparks fly as Fury taunted Wilder over the circumstances of his defeat to the self-styled "Gypsy King" last year.

As the barbs escalated, the host of the press conference sought to bring both fighters together for a traditional face-to-face stare-down – only for Fury's promoter Bob Arum to veto the confrontation.

Fury and Wilder – who clashed at a press conference ahead of their first fight in Los Angeles in 2018 – were hustled off the stage shortly afterward.

It brought an end to a fractious encounter at the MGM Grand Garden Arena, which turned ugly when Fury confronted Wilder over the American's accusations of cheating by Fury during the last fight.

Wilder has accused Fury of tampering with his gloves for the second fight – where Fury dominated to score a seventh-round knockout – to inflict more damage.

Wilder had also accused former trainer Mark Breland of spiking his own water, as well as blaming a heavy costume used during his ring walk for making him tired.

Wilder stood by his various cheating claims when quizzed on them Wednesday.

"I will go to my grave believing in what I believe in," Wilder said.

"I know things for a fact. I have confirmation and clarity over a lot of things. Men lie, women lie, but your eyes don't lie what they see."

But Wilder's comments were dismissed by Fury as the words of an "unwell person."

"He accused me of everything, accused his team, his trainer, the suit, injuries. Who else did he accuse – oh yeah, the Nevada State Athletic Commission, they were in on it as well. And the referee," said Fury (30-0-1, with 21 knockouts).

"Maybe if he'd come out with one of these excuses it would have been believable - but not 15, come on.

"He can believe what he wants. But what it tells me is that he's a weak mental person, who I will knock spark out on Saturday night."

Asked for his final comments, Wilder, replied: "I just tell you guys to prepare yourselves for the battlefield and get ready for war."

Fury meanwhile returned to his earlier theme, zeroing in on Wilder's comments about the circumstances of his loss in the second fight.

"Wilder said I only won the second fight because I cheated," Fury said.

"But then he goes and changes his whole team and training, says he's training as hard as ever.

"So I have to ask the question 'If I only won because I cheated, what was the point of changing everything?' Can anyone answer that question? I know he can't because he doesn't have the brains to," Fury said, gesturing at Wilder.

"He says he wants to do bad things to me, and hurt me and he's got all this anger and malice and aggression. I don't want to hurt Deontay Wilder. I just want to beat him in a fight.

"He knows what he's saying is lies. And deep down in his soul, he knows that he lost. He lost the first time, he lost the second time and he's going to lose the third time. And afterwards he'll be back working in that fast-food chain that he was working at earlier in his career - retired."