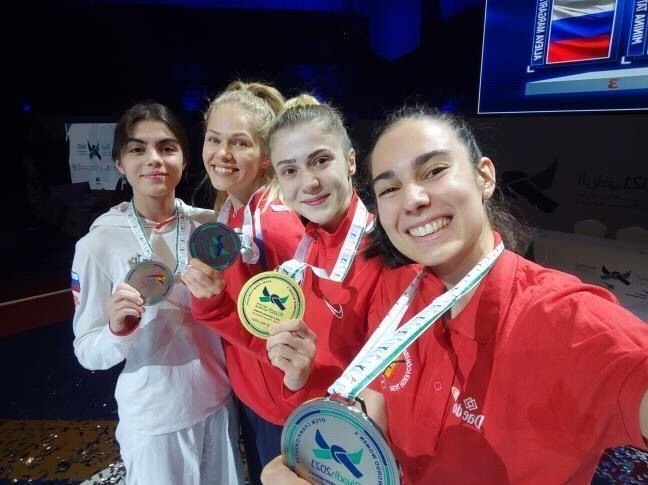 In recent weeks, Turkey has produced two martial arts champions from unlikely backgrounds. Through their mastery of taekwondo, Elif Soytürk Akın, a physical education teacher in Izmir, and Merve Dinçel, who hails from a tough area in Ankara, serve as inspirations while packing a kick.

Dinçel became the world champion in the 53-kilogram class at the WT championships held in Riyadh, the capital of Saudi Arabia. For the first time, the championships were open to athletes of all ages in the adults open category, which allowed Dinçel to compete.

Her success comes on the footsteps of Turkey's taekwondo success at the recent Tokyo 2020 Paralympics.

Mamak Mayor Murat Köse stated that they bring together amateur and professional sportspeople of all ages throughout the district. “With these medals, our athletes within our club both make us proud and set an example for the youth. I wholeheartedly congratulate our World Champion athlete Merve Dinçel. Our support for sports and athletes will continue to increase.”

Meanwhile in Izmir, Elif Soytürk Akın works as a teacher while also winning medals for her country.

Akın, 36, who works as a physical education teacher in Izmir, also holds numerous wins in taekwondo championships. The teacher returned home with a medal at the European Taekwondo Pumse Championship, in which she participated as part of the national team two weeks ago.

Akın works as a physical education teacher at Şehit Ömer Halisdemir Girls Anatolian Imam Hatip High School but has also made a name for herself with her success in taekwondo. After teaching 20 hours at the high school where she works, Akın also coaches her students in taekwondo. The teacher has European and world achievements from various championships she has participated in under her belt. Akın became champion as part of her team victory in the Senior Women's category at the European Taekwondo Pumse Championship held in Portugal on Nov. 19-21 – a triumph she recounts to her students, as she does all her sporting experiences.

Explaining that she became a national team athlete in 2001, Akın said: “I have a 26-year taekwondo background. I have six European and two world titles. I also have second place in the Islamic Games. At the European Taekwondo Pumse Championship held in Portugal on Nov. 19-21, we became champions in the Senior Women's category together with my teammates Ilkay Tekin and Fatma Törehan. We had the honor of having our national anthem sung there. That's why we are so happy. When my students discovered that we became champions, they immediately reached out on social media and congratulated us. That made me very happy.”

A lot goes into being a world champion and the physical education teacher works at an intense pace. “I teach 20 hours at my school, then we train with the students. I have a group of 25 students and they are starting to get titles too. One student who participated in the competition for the first time came in third in the interprovincial tournament. I try to convey all my experiences related to the sport I do to my students. I hope to see their success too. Their success means a lot to me."

Emphasizing that teaching is a sacred profession, Akın said: “I think teachers are very important in this society. Children continue the education they receive from the family with us. Together with my colleagues, we try to touch the lives of our students. Touching a student's life is very sacred. I have given my life to this sport and I am trying to convey my experiences to my students,” she explained.

The successful athlete thanked Minister of Youth and Sports Mehmet Kasapoğlu, the athlete Kenan Sofuoğlu and the Turkish Taekwondo Federation for their support in the championship held in Portugal.

'I take her as an example'

Zehra Tural, one of Akın's students, said: “I participated in the competition for the first time this year and I came third overall in Turkey. My teacher Elif always supports me. Our goals are big, but even if I am not successful, my teacher Elif is always by my side. That's why I work stress-free. I already wanted to focus on taekwondo, but with the encouragement of my teacher, I started sports. I'm proud of her. I take her as an example in everything. I am very happy to have such a teacher. I was very happy when the news of the championship came. I dreamed that maybe one day I would compete like her and experience the same happiness when I became champion.”