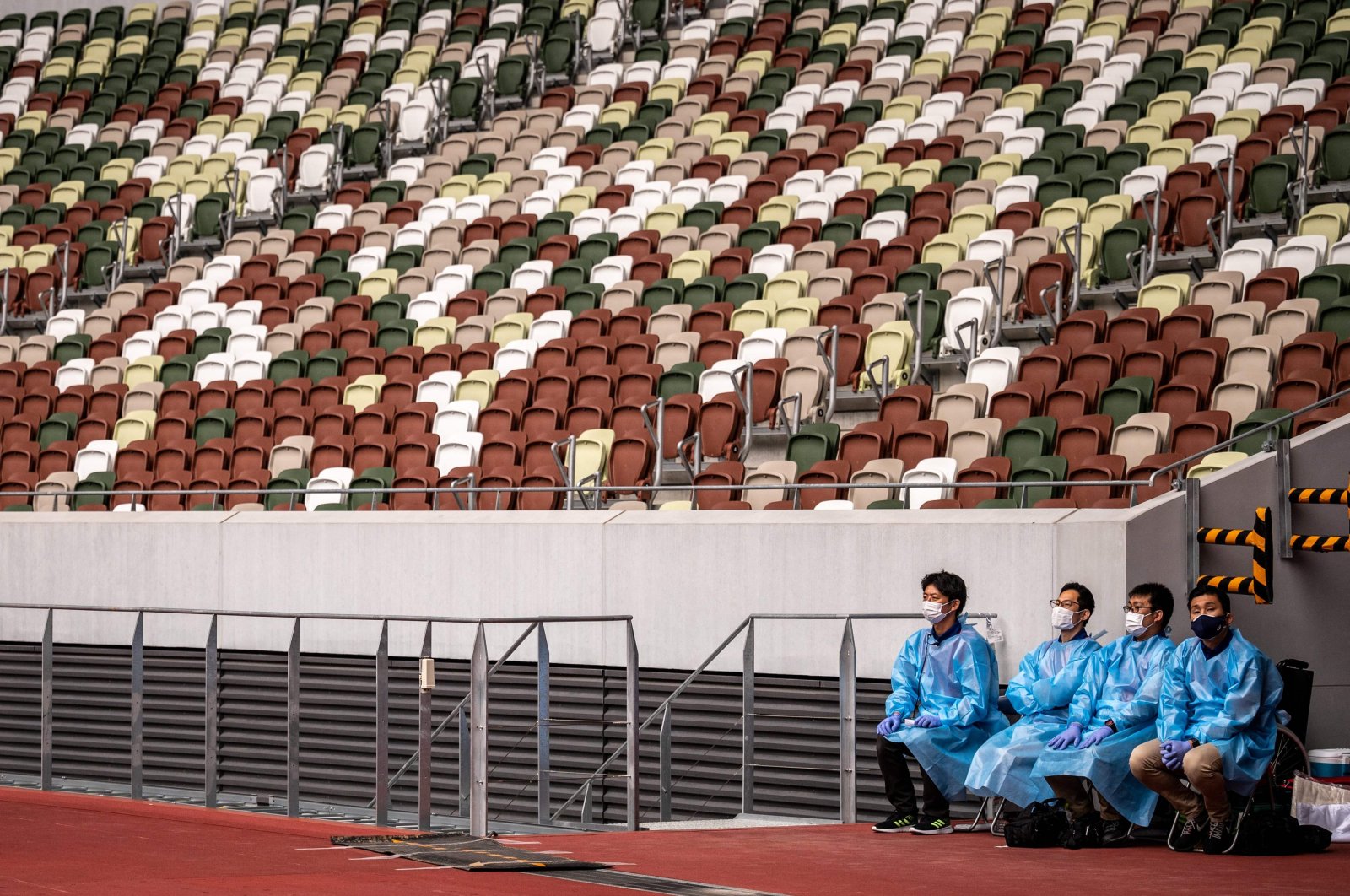 Staff members in protective clothing and masks sit next to empty seats during a para-athletics test event for the 2020 Tokyo Olympics at the National Stadium in Tokyo, Japan, May 11, 2021. (AFP Photo)
by REUTERS Jul 07, 2021 1:24 pm
RECOMMENDED

Japan is mulling a ban on all spectators for the COVID-delayed Olympics as authorities were expected to declare a state of emergency for Tokyo just 16 days before the Games began, several sources told Reuters Wednesday.

For weeks, medical experts have said having no spectators at the Olympics would be the least risky option amid widespread public concern about the risk the Games will fuel new surges of coronavirus infections.

Organizers have already banned overseas spectators and set a cap on domestic spectators at 50% of capacity, up to 10,000 people, to contain a lingering coronavirus outbreak.

Officials have been wrestling with the question for months but a ruling party setback in a Tokyo assembly election Sunday, which some allies of Prime Minister Yoshihide Suga attributed to public anger over the Games, had forced their thinking, sources said.

Japan will hold a general election later this year and the government's insistence that the Games – postponed last year as the virus was spreading around the world – should go ahead this year could cost it at the ballot box.

The Tokyo 2020 organizing committee said restrictions on spectators would be based on the content of Japan's coronavirus state of emergency or other relevant measures.

Japan has not experienced the kind of explosive COVID-19 outbreaks seen elsewhere but has had more than 800,000 cases and 14,800 deaths. The capital, Tokyo, reported 920 new daily cases Wednesday, the highest since May 13.

A slow rollout has meant only a quarter of its population has had at least one COVID-19 vaccination shot.

Preparations for the Games have been shrouded in concerns about the impact of COVID-19 as authorities have struggled to stamp out persistent clusters of infections, particularly in and around the capital, Tokyo.

The government is preparing to declare a state of emergency for Tokyo to contain a rise in coronavirus infections, the Sankei daily reported, citing government sources.

That would mean stepping up restrictions already in place in the city beyond an original end-date of July 11. The newspaper also said a "quasi emergency" in place in three prefectures neighboring Tokyo, which will host some Olympic events, would be extended but did not say for how long.

The issue of spectators could be decided Thursday at five-way talks, which will include the Tokyo governor and International Olympic Committee (IOC) President Thomas Bach.

Asked about the topic at a news conference Tuesday, top government spokesman Katsunobu Kato said Suga has said holding the Games without spectators was a possibility.

Toshiro Muto, the chief executive of the organizing committee, said on Wednesday the Games are striving to ensure safety for all participants by taking effective public health measures against COVID-19.

Muto, addressing the U.N. Human Rights Council in Geneva by a recorded video, added: "Through the successful hosting of the Tokyo 2020 Games, we hope to show the world that people have the right to live healthier and happier lives, even in difficult circumstances."

Shigeru Omi, the government's top health adviser, told a parliamentary health committee Wednesday it was important to reduce the number of Olympic officials and others attending events as much as possible.

Early July to September was "one of the most important periods" in combating the coronavirus in Japan, he said.

"We have been saying that it's preferable that the events be held without spectators," Omi said.

"We are asking many people to take steps to prevent further spread of the infection. Images of spectators would be sending out a contradictory message to a lot of people ... In formulating our coronavirus response, people's feelings are a very important factor."

Tokyo authorities have also decided to move most of the torch relay, set to reach the capital Friday, off public roads. Torch-lighting ceremonies without spectators will be held instead.