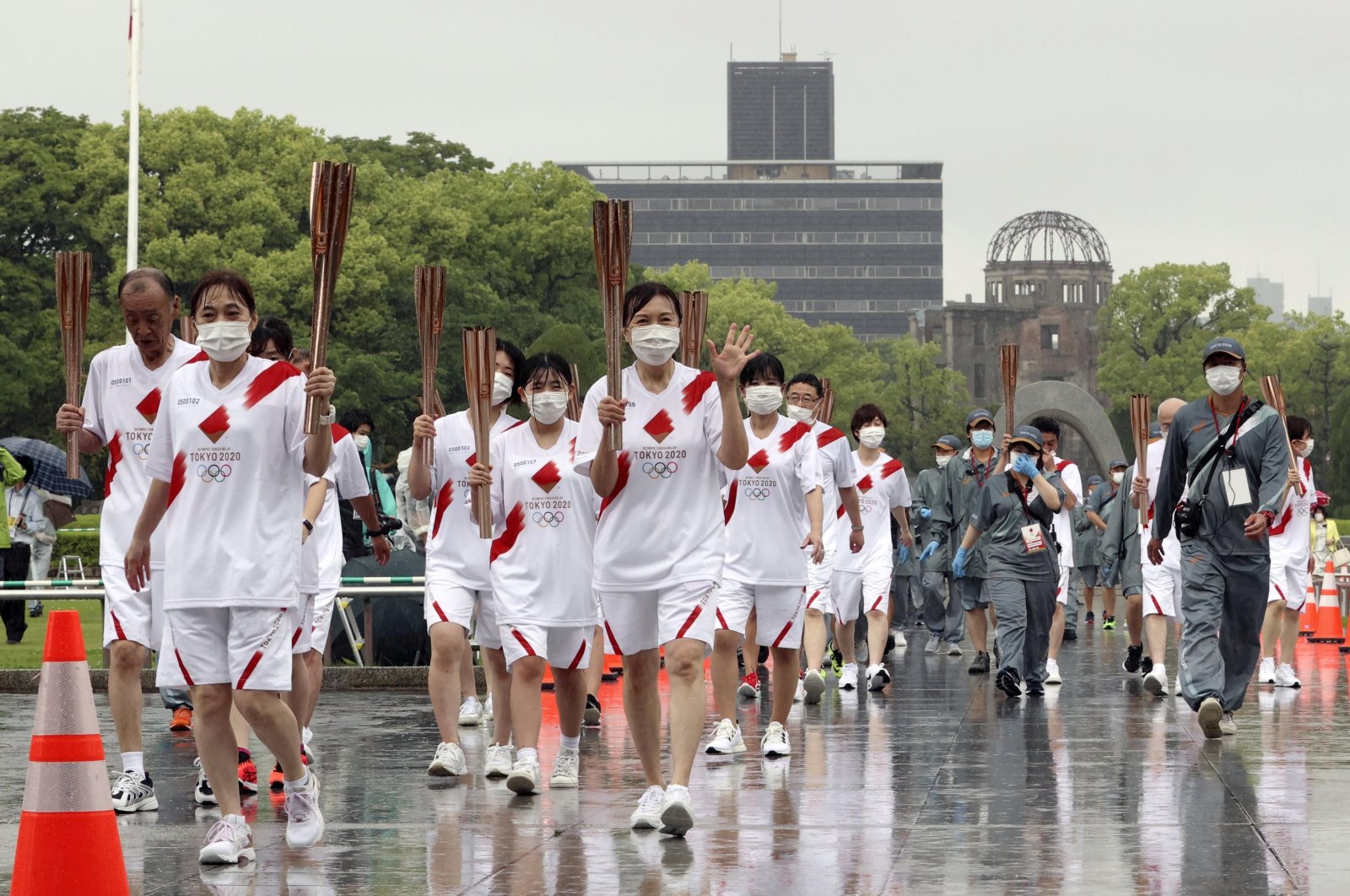 Tokyo 2020 Olympic torch relay participants pass the Atomic Bomb Dome in the background during the event without spectators due to the COVID-19 outbreak, at Peace Memorial Park in Hiroshima, Japan May 17, 2021. (Reuters Photo)
by French Press Agency - AFP May 17, 2021 12:53 pm
RECOMMENDED

With less than 10 weeks before the Tokyo Olympics, a new poll on Monday showed that more than 80% of Japanese oppose hosting the COVID-delayed Games this year.

The latest downbeat survey, underlining public antipathy, comes after Japan expanded a coronavirus state of emergency Friday as the nation battles a fourth wave of infections.

The surge in cases has put pressure on the country's healthcare system, with medical professionals repeatedly warning about shortages and burnout.

The weekend poll by the Asahi Shimbun daily found 43% of respondents want the 2020 Games canceled, and 40% want a further postponement.

Those figures are up from 35% who backed cancelation in a survey by the paper a month ago, and 34% who wanted a further delay.

"I am one of those in the 80%. I think the Olympics should be postponed. Is it that difficult to postpone it?" passer-by Sumiko Usui, 74, told Agence France-Presse (AFP) in Tokyo.

"In my honest opinion, it will be difficult to hold the Games ... Athletes from overseas must be worried as well, because Japan's coronavirus situation is bad," he said.

"I want to see it happen, but it will probably be difficult when you think about the bigger picture."

Only 14% support holding the Games this summer as scheduled, down from 28%, according to the Asahi poll of 1,527 replies from 3,191 telephone calls.

If the Games go ahead, 59% of respondents said they want no spectators, with 33% backing lower fan numbers and 3% a regular-capacity Games.

For months, polling has found a majority in Japan oppose holding the Games this summer.

A separate poll by Kyodo News published Sunday showed 59.7% back cancelation, though further postponement was not listed as an option.

Olympic organizers say tough anti-virus measures, including regular testing of athletes and a ban on overseas fans, will keep the Games safe.

But the Kyodo poll found 87.7% of respondents worry that an influx of athletes and staff members from abroad may spread the virus.

Asked about the polls, government spokesman Katsunobu Kato said the government would "make efforts so that the Japanese people understand the Tokyo Games will be held in a safe and secure manner".

"We need to give explanations on details of the concrete (coronavirus) measures," he said, insisting that the Games would not put further pressure on medical services.

Japan has seen a smaller COVID-19 outbreak than many countries, with fewer than 11,500 deaths so far. But the government has come under pressure for its vaccine rollout.

The Kyodo poll found 85% of respondents considered the rollout slow, with 71.5% unhappy with the government's handling of the pandemic.

Thousands of slots were snapped up on Monday as online bookings opened for two mass vaccination centers which will deliver up to 10,000 shots a day in Tokyo and 5,000 in Osaka, initially to the elderly.

All 25,000 available slots were already booked up in Osaka, the center said, while around 21,000 reservations were made in Tokyo.