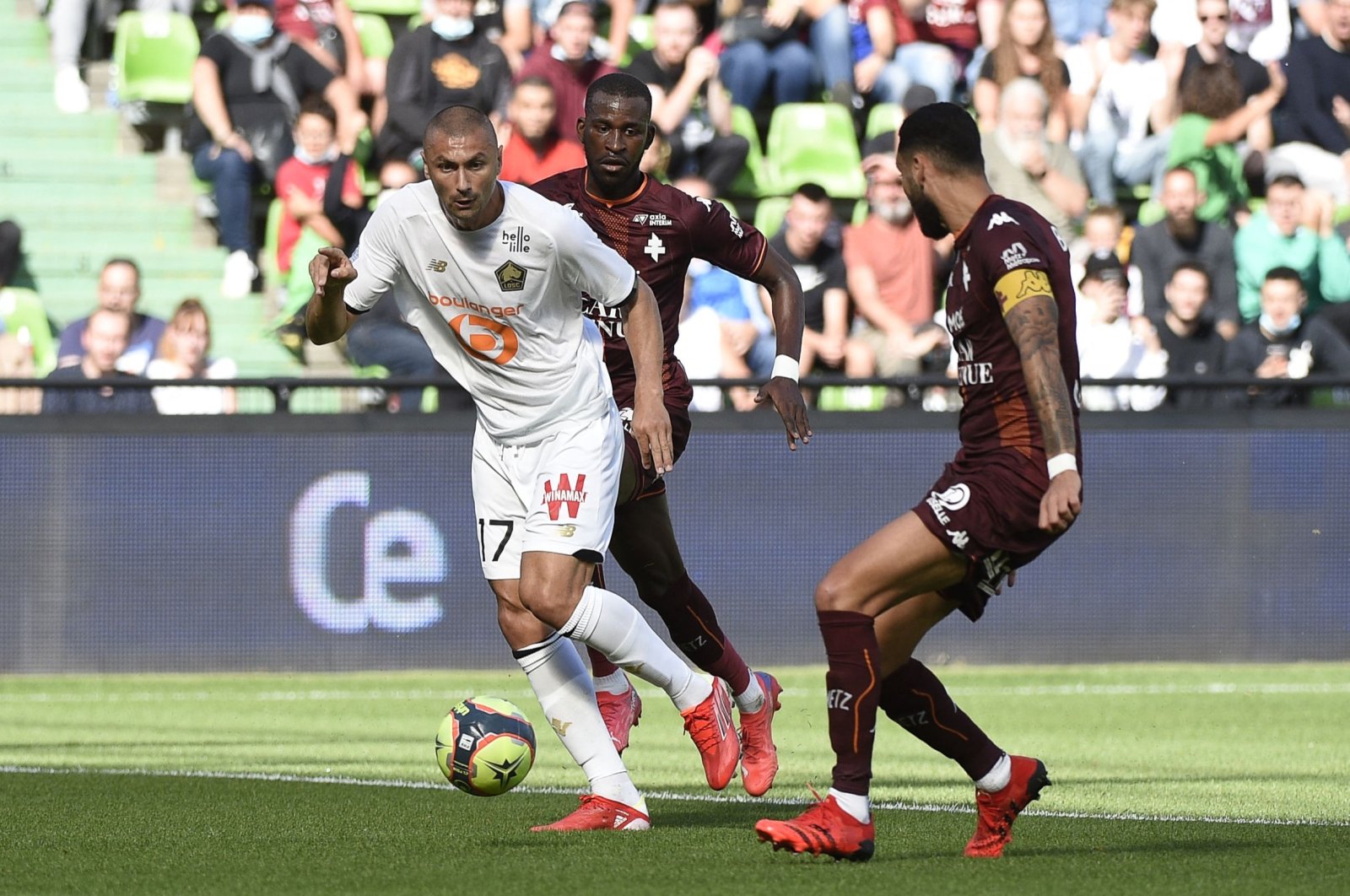 French top-tier Ligue 1 was treated to a Turkish delight as Turkey nationals Burak Yılmaz, Cengiz Ünder and Yusuf Yazıcı all shone for their respective teams Sunday.

Talismanic Turkey national team striker Yılmaz was hailed as 'a true leader' after forcing home a last gasp goal as Lille fought back to a 3-3 draw at Metz where the French champion opened its title defense.

The surprise champions, who also beat Paris Saint-Germain in the French Super Cup last week, were trailing 3-1 before late goals from Nanitamo Ikone and the relentless Turkish national team captain Yılmaz gave them a hard-earned away point. He was assisted by compatriot Yazıcı.

It was a cautionary tale for Metz who foolishly gave the ball away with a shot on goal deep into injury time. Yılmaz then rampaged the full length of the pitch with the seconds running down to dribble into the area from the left wing and squeeze a shot home from a tight angle.

"That is a true leader," Lille coach Jocelyn Gourvennec said of Yılmaz.

"He's a real professional, a real athlete and works so hard when the chips are down."

"You see great players in the big moments, and we saw that today," said Gourvennec after his first league match in charge.

"It's not right and I'm not happy. But after that we showed why we are champions," said the Portuguese international.

However, there was to be no champagne reception in his first game as the Ineos-bankrolled side were held 0-0 at home by Reims.

Turkish winger Ünder, in the meantime, made a flying debut for Marseille, helping his side come back from two goals down to win 3-2 at Montpellier.

An own-goal by Luan Perez and a strike by Gaetan Laborde had given Montpellier a 2-0 lead at half-time.

Ünder, on loan at Marseille from Serie A side Roma, hauled the visitors back into the match in the 68th minute after being set up by De la Fuente.

French midfielder Dimtri Payet then scored with a 25-meter free kick in the 75th and won it five minutes later when he drifted in from the left and found the bottom right corner.

However, the game was held up when fans pelted the pitch with bottles. The clash at the Stade Mosson was halted in the 89th minute after Marseille substitute Valentin Rongier had been hit on the head with a bottle.

Montpellier's Florent Mollet was also targeted as he readied to take a corner.

Referee Jeremie Pignard led both teams off the pitch while appeals were made for calm.

The game was eventually restarted after a delay of 10 minutes.

"It's always unfortunate because it penalizes everyone. The referee did what he had to do. It's always a little sad to see this kind of thing," said Montpellier coach Olivier Dall'Oglio.

The derby was played in front of 13,500 fans as the first weekend of the new season witnessed the return of spectators after seven months of matches played behind closed doors due to the pandemic.

In Brittany, 18,000 fans were on hand to see Rennes draw 1-1 with promoted Lens, where teenage winger Kamaldeen Sulemana from Ghana opened the scores with a snap-shot before Lens drew level late on after a goalmouth mix-up.

Promoted Clermont got off to a flyer beating Bordeaux 2-0 away thanks to late goals from top scorer in Ligue 2 last season Mohamed Bayo, and Jodel Dossou with the last kick of the game.

Lorient took the lead with a Vincent Le Goff strike in a tight game at Saint-Etienne, who leveled from the spot with a Wahbi Khazri penalty.

Paris Saint-Germain might be closing in on signing Lionel Messi but another Argentinian was its match-winner on Saturday as Mauro Icardi's goal secured a 2-1 victory against newly-promoted Troyes.

Lyon was held to a 1-1 draw by Brest in its opening game of the campaign.