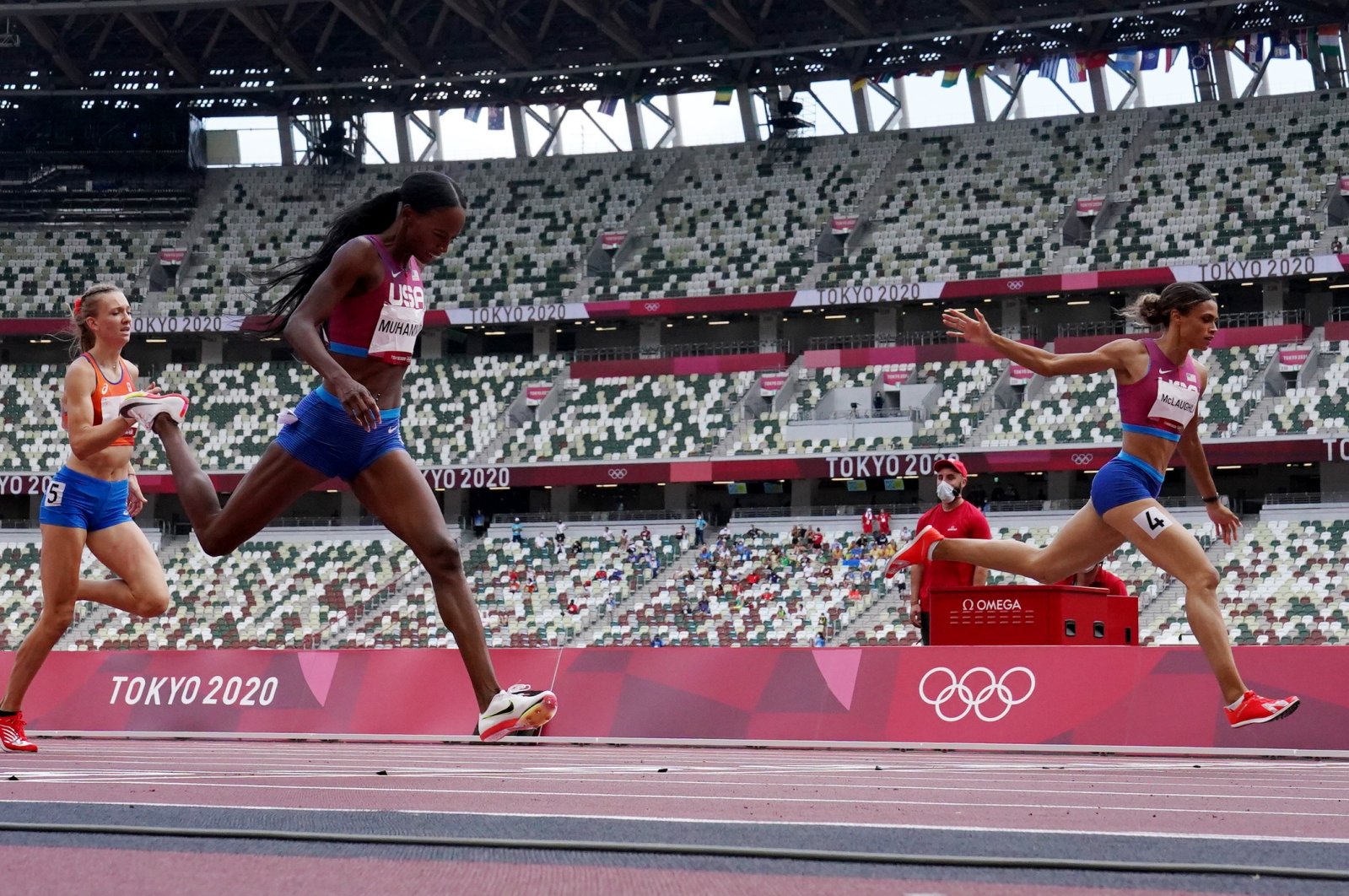 Elsewhere on day 12 of action in Tokyo, the Netherlands dumped defending champions Britain out of the women's hockey while the women's golf got underway.

At the Olympic Stadium, McLaughlin powered home under the beating Tokyo sun in 51.46 seconds, with defending champion Dalilah Muhammad claiming silver in 51.58 after another classic duel between the two dominant American hurdlers.

World champion Muhammad made a flying start in the lane outside her compatriot and rival but McLaughlin produced a late burst of speed to claim victory.

The 21-year-old McLaughlin's blistering time bettered her world record set at the U.S. trials in Oregon in June, when she ran 51.90 seconds.

Muhammad, 31, also ducked inside the previous world record, with bronze medallist Femke Bol of the Netherlands just outside the 52-second mark.

It came a day after an epic duel between Karsten Warholm and Rai Benjamin in the men's 400-meter hurdles, which ended with Norway's Warholm winning and improving his own world record by a huge margin.

"What a great race," said McLaughlin. "I'm just grateful to be out here celebrating that extraordinary race and representing my country.

"I saw Dalilah ahead of me with one to go. I just thought 'run your race.' The race doesn't really start till hurdle seven. I just wanted to go out there and give it everything I had."

Canadian De Grasse was the fastest man in the semi-finals with a national record 19.73, 0.1sec quicker than another American, Kenneth Bednarek.

Dutch star Sifan Hassan will be also be attempting the next step in her bid for an unprecedented treble, running in the 1500-meter semifinals two days after winning the 5000-meter title.

The 19-year-old carved up the Ariake Urban Sports Park with a flowing opening run in the final, and her 60.09 points proved enough for victory ahead of Hiraki and Brown.

Brown threatened to snatch a shock win with a flawless closing routine but her 56.47 was not enough.

Japan also snapped up the men's and women's street titles earlier in the Games and they have now bagged five of the nine medals so far as skateboarding makes its debut as one of four new Olympic sports.

Both Brown, at 13 years and 28 days, and Hiraki (12 years and 343 days) were bidding to break an 85-year-old record to become the youngest Olympic gold medalists.

In early action in Tokyo, Marcela Ana Cunha of Brazil held off a charge from defending champion Sharon van Rouwendaal of the Netherlands to win the women's 10-kilometer marathon swimming event.

The Dutch team hammered Britain 5-1 in the semifinals of the women's hockey while Serbia edged China 77-70 in the women's basketball quarterfinal to set up a last-four clash against either Australia or the USA.

World No. 1 women's golfer Nelly Korda was the early clubhouse leader after completing her first round at the Kasumigaseki Country Club in a four-under-par 67.

China continued its march toward another table tennis team gold, crushing Germany 3-0 to set up a mouth-watering final against Japan.