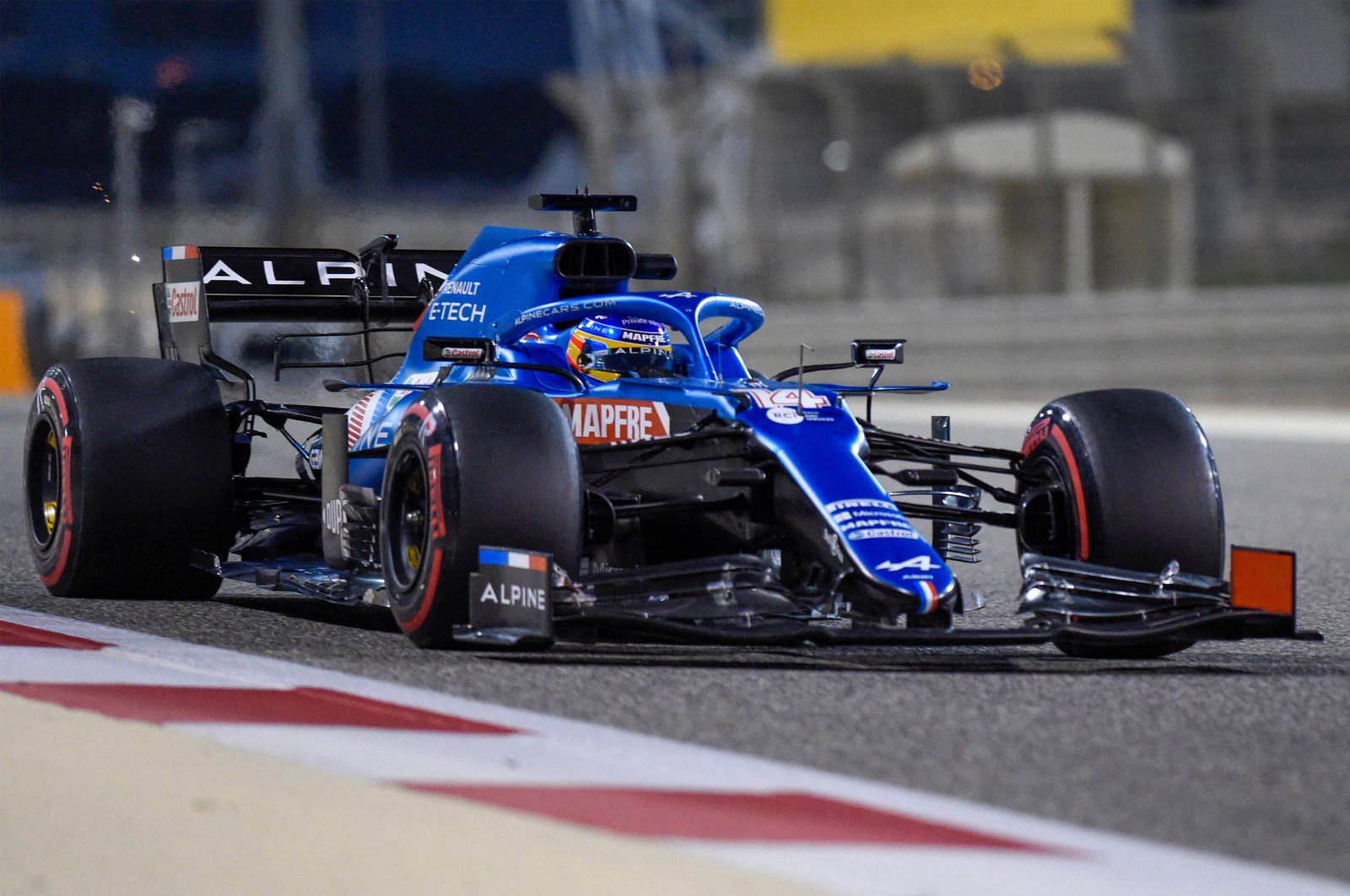 Alpine driver Fernando Alonso in action during the third day of the Formula One pre-season testing at the Bahrain International Circuit, in Sakhir, Bahrain, March 14, 2021. (AFP Photo)
by Associated Press Mar 26, 2021 11:03 am
RECOMMENDED

Fernando Alonso recently drove up behind the Mercedes of Lewis Hamilton entering the straightway and quickly pulled to the side to overtake the seven-time world champion.

The move was replayed again and again in Spain and brought some excitement to Formula One fans everywhere.

The old rivals who fought for titles in the past were back at it again.

It was only preseason testing, though, and it turned out Alonso didn’t even know it was Hamilton – his McLaren teammate in 2007 – who was in front of him when he made the pass at the Bahrain track where the new season will begin this weekend.

Alonso himself was the first to say that moments like those are not likely to happen right away on race day as he returns to F1 after a two-year absence.

“I only saw in the news and the video and everyone excited about the moment,” Alonso said in an interview with The Associated Press (AP) on Thursday, ahead of Sunday’s season-opening Bahrain Grand Prix.

“Obviously it would be nice to be fighting and to have that adrenaline of big fights and win possibilities on Sundays, but let’s take one step at a time,” he said. “Let’s see where we are. We are very motivated. We are very happy with how things went in the tests and we just need to go racing now, which is the main thing for us.”

A few weeks ago, Alonso feared he wouldn’t be racing at all after breaking his upper jaw in a bicycle accident.

“I was very scared,” the 39-year-old Spaniard said. “One month before the first race of the championship you find yourself in the hospital after a bike accident ... And you start thinking if this could delay your comeback and if this will have any consequences on your comeback. But luckily the doctors quickly identified the problem ... and immediately said that it was a quick recovery.”

He needed less than two weeks to get back to preparing for his season with Alpine, the rebranded Renault team where the Spaniard won his two F1 titles in 2005 and 2006.

Alonso is returning to F1 after racing in other series the last two seasons, including the Indy 500. He said he will “be up to speed quite quickly” as there were a few changes in the series since he left, but acknowledged he likely won’t be contending for victories.

He said he “would love to be in that position of winning straight away” but expects “things quite similar to last year,” with Mercedes and Red Bull dominating at the top again.

“Our aim is to be there taking any opportunity that may come, try to be regular in the points, in the top 10, try to fight for some podiums,” he said.

Because of the few changes from last season, Alonso hopes Alpine will keep Renault’s momentum after a good second half of 2020 when the team became “very strong and more competitive.”

He said his first impressions with the car were good and he ended preseason testing “with a positive feeling.”

“How that translates in terms of competitive level, we don’t know yet,” Alonso said.

Part of the goal this season will be to prepare for next year when wide-ranging regulation changes could revamp the grid and make it more even.

“I’m confident,” he said. “I think the team knows that one of the biggest challenges into next year is going to be understanding the rules, interpreting the rules in a clever way, and also starting the project as soon as possible. We have to be with one eye on the 2021 season and another eye on the 2022 (season).”

By 2022, Alonso hopes to be fully up to speed, and that his encounters with Hamilton on the track will be more meaningful than the one from a few days ago in Bahrain.