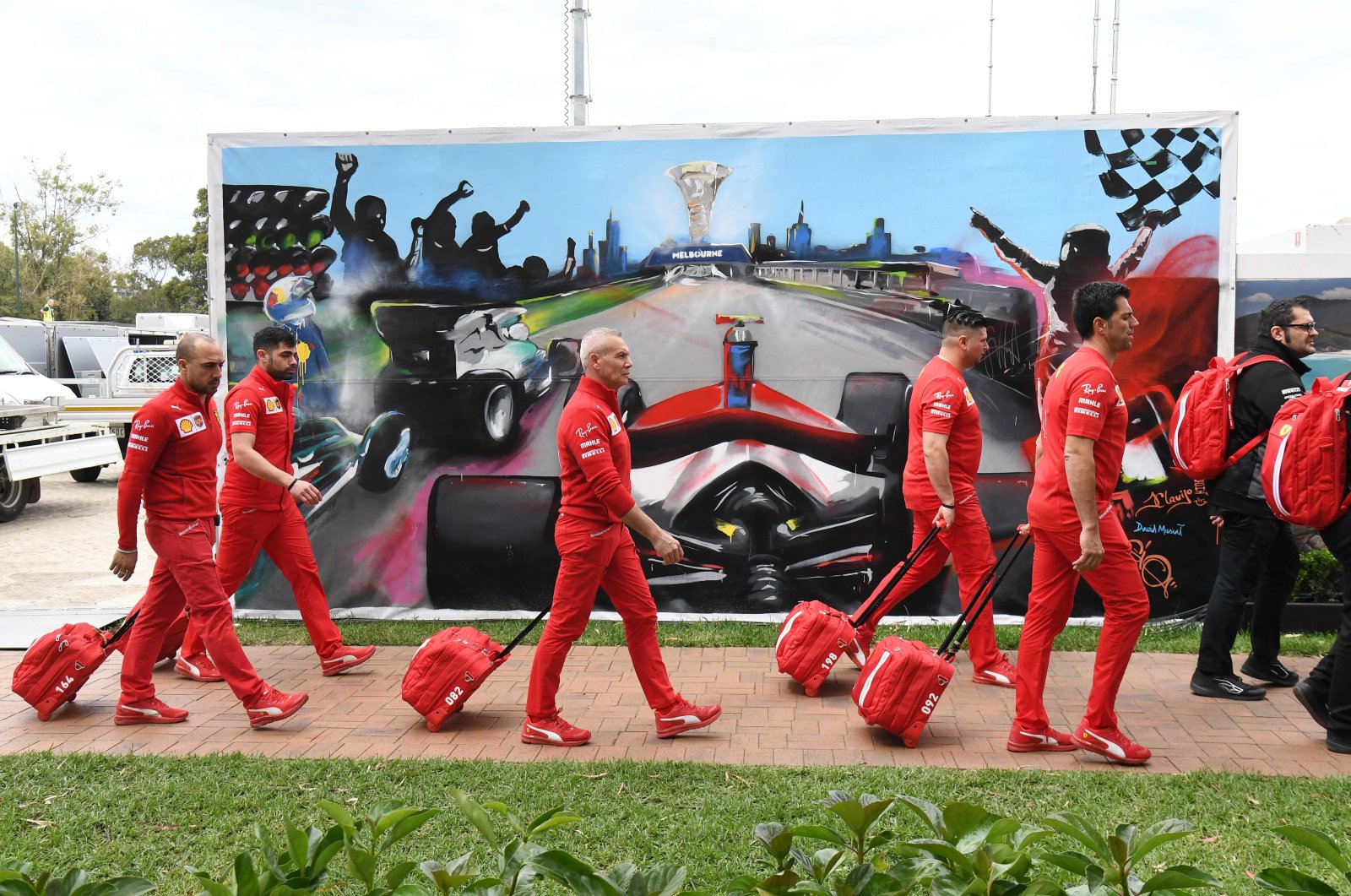 Members of the Ferrari team arrive to pack up their equipment after the Australian Grand Prix was canceled, Melbourne, March 13, 2020. (AFP Photo)
by Compiled from Wire Services Mar 13, 2020 10:21 am

Sports across the world came to a standstill as Formula One called off the Australian Grand Prix, while prestigious football, tennis, baseball, golf and hockey leagues declared an immediate halt to events as fears of the coronavirus decimated the sporting landscape

The impact of the coronavirus pandemic on sports swept into the southern hemisphere Friday with the cancellation of the Australian Formula One Grand Prix adding to an unprecedented shutdown of elite events and competitions around the globe.

Top European football leagues were placed on hold on Thursday, while the elite men's tennis circuit was suspended for six weeks, the NHL shut down and golf's prestigious Players Championship was canceled.

The Olympics, the biggest sporting event of them all, will go ahead as planned, Tokyo organizers insisted Friday, a few hours after the flame was lit in ancient Olympia at the start of the torch relay.

The coronavirus outbreak has left sports administrators wrestling with the inherent contradiction of holding events designed to bring large numbers of people together at a time when governments are desperate to stop the spread of a virus transmitted by close contact.

England's hugely popular Premier League will hold an emergency meeting on Friday after Arsenal announced that club manager Mikel Arteta had tested positive for the coronavirus.

Leicester City manager Brendan Rodgers, who has three players in self-isolation after showing symptoms of the virus, said England should follow the lead of Italy, France, Spain and the Netherlands in suspending the season.

"There is absolutely no doubt, from a logical perspective. There is the public health and ethical side as well," he said.

Formula One gives in

With fans queuing at the gates of Albert Park in Melbourne early Friday for the Formula One season opener, the race was canceled just a few hours before the cars were scheduled to take to the track for the first time.

The decision came after a member of the McLaren team tested positive for the coronavirus and the British-based outfit scratched the race, which attracts some 300,000 fans every year.

The rapid spread of the virus left organizers with little choice Friday but to cancel the season-opening race, particularly after McLaren withdrew because a team member tested positive for the COVID-19 illness and following heavy criticism from six-time world champion Lewis Hamilton.

The two practice sessions that usually showcase what the teams have been improving in the off-season were less than two hours from starting when the decision was publicly announced. Principals of nine F1 teams and organizers met overnight and “concluded with a majority view of the teams that the race should not go ahead," a joint statement by FIA, motorsport's governing body, local organizers and F1 said.

“It's been a very fluid situation," F1 chairman Chase Carey said. “We're all disappointed not to have it, but I think we've made the decision we had to make."

“It's not like it came out of the blue," Carey told a news conference beside the F1 paddock that ended in light rain. “A week ago, when teams started traveling here, we felt it was the right decision (to stage the race). Clearly the situation changed in the interim."

Practice, qualifying and Sunday's race were all scrapped, casting doubt over the Bahrain Grand Prix which is scheduled to be held next week and the Vietnamese GP, scheduled for April 5. Authorities in Bahrain have already said no fans will be allowed into the circuit. Carey said a decision on whether or not to go ahead with the race would be made in the coming days. The Chinese GP has already been postponed from April.

Hamilton used the first official news conference with F1 drivers in Melbourne to say he was shocked that organizers planned to proceed with the Australian Grand Prix, which regularly attracts more than 300,000 people over four days. McLaren's decision to withdraw was ultimately the catalyst for the cancellation. That person and 14 other McLaren team members have been placed in quarantine in a Melbourne hotel for 14 days.

In Tokyo, top Japanese government officials said they were determined to hold a "safe and secure" Olympics on schedule, a day after U.S. President Donald Trump said organizers should consider delaying them for a year because of the pandemic.

"The IOC (International Olympic Committee) and 2020 organizers are not at all considering canceling or postponing the Games," he said.

Fans at golf's Players Championship at least got to see the first round at Sawgrass on Thursday before the PGA announced a ban on spectators at all its events until April 5.

Players and caddies were later informed the tournament had been canceled.

In tennis, the men's ATP Tour announced on Thursday that no tournaments would take place until after April 20 at the earliest, wiping out the prestigious Miami Open and Monte Carlo Masters as well as events in Houston, Marrakech and Barcelona.

The WTA, which runs the women's tour, stopped short of a wholesale shut down but canceled tournaments in Charleston, Guadalajara and Bogota with a decision on the European claycourt season promised this week.

The Indian Wells tournament had already been canceled and the International Tennis Federation (ITF) has suspended all its events until April 20, including the revamped version of the Fed Cup Finals scheduled for Budapest.

The virus had already had a big impact on North American sports with a positive test for a Utah Jazz player prompting the National Basketball Association (NBA) to suspended the season until further notice on Wednesday.

NHL Commissioner Gary Bettman announced it had temporarily suspended its season in a statement issued after a conference call with the board of governors.

Major League Baseball suspended Spring Training and said it would place the opening day on hold, while Major League Soccer announced a 30-day suspension for its current season.

The NCAA's "March Madness" basketball tournament, one of the most popular annual sporting events in America, was also canceled.

Domestic football leagues and Europe's elite club competition the Champions League have been postponed one by one.

Matches in England were called off Friday until at least April 3 after five Premier League clubs said some players or staff were in self-isolation. Arsenal manager Mikel Arteta has tested positive for the virus, as has Chelsea winger Callum Hudson-Odoi.

In France, both Ligue 1 and Ligue 2 games have been immediately halted. In a statement, Professional Football League (LFP) said the decision was taken unanimously after suggestions earlier this week that the French league could continue without any spectators.

European football’s governing body UEFA on Friday said it was stopping next week's games in all competitions, including the two remaining Champions League matches which had not been already called off – Bayern Munich vs. Chelsea and Barcelona vs. Napoli, both scheduled for Wednesday.

UEFA will also hold an emergency meeting with 55 football federations on Tuesday to discuss the effect of the crisis on domestic leagues, European competitions and Euro 2020, which is due to start in June.

La Liga matches in Spain's were already canceled as Real Madrid put its squad into quarantine after a member of the club's basketball team tested positive on Thursday.

Italy's Serie A has already stopped until at least April 3 with the country in lockdown after more than 15,000 infections and over 1,000 deaths. Two Serie A players, Sampdoria's Manolo Gabbiadini and Daniele Rugani of Juve, have tested positive.