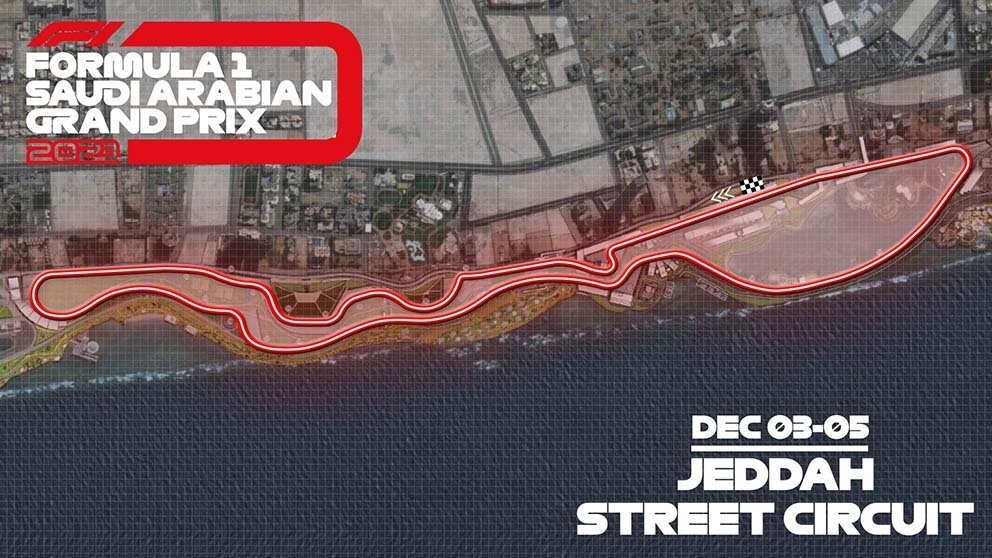 A view of the Jeddah Street Circuit which will host the Saudi Arabian Grand Prix in December 2021. (Saudi Arabian GP Photo)
by REUTERS Mar 18, 2021 5:48 pm
RECOMMENDED

Formula One unveiled its longest and fastest street circuit on Thursday, predicting top speeds of 322kph and wheel-to-wheel racing when Saudi Arabia hosts a race for the first time in Jeddah in December.

Organizers said the Dec. 5 night race in the Corniche area of the Red Sea port city will be over a 6.175km layout, making it the sport's second-longest track after Belgium's Spa-Francorchamps.

Largely using existing roads and encircling a lagoon, the floodlit circuit will feature 27 corners with cars lapping at average speeds of 252.8kph, according to Formula One's simulations.

That would put it behind Italy's Monza, the fastest of any circuit, but ahead of Britain's Silverstone in terms of outright speed.

The fastest street circuit at the moment, for average speeds, is Melbourne's Albert Park at 237.2kph. The longest is Azerbaijan's Baku at 6.003 kilometers.

"This is a circuit that is utilizing some existing infrastructure but we've been lucky that there are areas where we've been able to build from scratch," said Brawn.

"So we've been able to build some really exciting parts of the circuit.

"At one end, there will be a 180-degree corner with a moderate amount of banking, so it will be a high G-load and high stress for the drivers."

The Saudi race is due to be the penultimate round on a record 23 race calendar.

"When you have a high-speed street circuit it doesn't leave much room for error," said Brawn.

"I hope we can have a championship that's maintained to the end and this will be definitely a fitting venue to have those final battles in the championship."

The race, however, has attracted criticism from human rights groups, including Amnesty International, who have accused Saudi Arabia of "sportswashing" – using sports events to create a positive image.

Some campaigners recently wrote to Mercedes' seven times world champion Lewis Hamilton asking him to boycott the race or speak out against reported human rights abuses in the country.

Saudi organizers have said hosting a race will result in "positive change."